Bullets and Bulletins: Media and Politics in the Wake of the Arab Uprisings

Research on the role that the media has played in the Arab uprisings highlights the liberating potential of the media as a medium for self-expression and democratization. However, little research has focused on questioning the premises and the theories which are adopted to frame this research. This is the concern addressed in Bullets and Bulletins: Media and Politics in the Wake of the Arab Uprisings. This edited volume critically evaluates the conceptual framework that research adopts to explore the development of a public sphere within the Arab World.

Research on the role that the media has played in the Arab uprisings highlights the liberating potential of the media as a medium for self-expression and democratization. However, little research has focused on questioning the premises and the theories which are adopted to frame this research. This is the concern addressed in Bullets and Bulletins: Media and Politics in the Wake of the Arab Uprisings. This edited volume critically evaluates the conceptual framework that research adopts to explore the development of a public sphere within the Arab World.

The book is introduced by two chapters written by the editors, Suzi Mirgani and Mohamad Zayani, respectively. In “The State of Arab Media in the Wake of the Arab Uprisings,” Mirgani highlights how social-media reflects the developing liberation of Arab media from state control during the uprisings. Following this introduction, the first part of the book, entitled “Arab Media in Transition,” consists of three chapters that review the historically contextualized reading of this topic. In “On the Entangled Question of Media and Politics in the Middle East,” Zayani explores how the contemporary Arab world rewrites the notion of the “political” through cultural practice, whether through direct political contestation or digital participation (p. 34). Zayani highlights the
role that transnational satellite channels, specifically Al Jazeera, have played in this process.

In the following chapter, “A Comparative Analysis of Traditional Media Industry Transitions in Tunisia, Libya, and Egypt,” Fatima el Issawi critically evaluates whether the evolution of popular engagement with the media is really reflective of the democratization of the media. In a quest for a culturally-contextualized study, el Issawi conducts semi-structured interviews with media practitioners in traditional mass media industries in Libya, Egypt and Tunisia. El Issawi concludes that in all these countries, journalists have failed to assume an active role in monitoring the political sphere because of the absence of democratic institutions that can protect them.

The historically-revisionist reading in this part of the book, however, is concluded by a chapter that is more descriptive than critical. In “The Culture of Arab Journalism,” Naila Hamdy offers a historical documentation of the intricate struggle for political freedom in Egypt, Syria and Lebanon since the colonial period. In all three countries, she notes, the political struggle coincided with an evolving recognition of the potential of the media to mobilize the public.

The second part of the book utilizes space as a frame to explore the physical and virtual engagement of the Arab public in cultural production. Adopting a descriptive approach, Dina Matar, in “Narratives and the Syrian Uprisings: The Role of Stories in Political Activism and Identity Struggles,” draws on western communication theories to present a case study of Syrian narrative practices. These narratives, songs, graffiti, and films have been posted on Syrian digital “protest websites” in a novel attempt to contest the regime’s imposed narratives (p. 90).

A similar, semi-descriptive study is Marwan Kraidy’s “Public Space, Street Art and Communication in the Arab Uprisings.” The chapter investigates the communicative aspect of public spaces such as Tahrir Square in Cairo. Besides having symbolic and historical significance as icons for revolutions, these spaces have allowed for the expression of opinion of the multitudes through their bodies and through artistic forms, such as Syrian stencil graffiti. The author concludes that the communicative role given to public space, physically and virtually, reflects the striving of the Arab public to connect with global modernity.

The last chapter in this part of the book represents a welcome shift back to the book’s agenda to critically evaluate conceptual frameworks. “Change and Continuity in Arab Media: A Political Economy of Media Cities,” by Joe Khalil, questions the validity of evaluating the post-uprising changes through the lenses of history and space. Khalil argues for an economic investigation of media cities as centers for the production and dissemination of news. He concludes that the proliferation of media channels, the increasing professionalism of the Arab media, and the growing popularity of social media are not indicative of actual change as traditional media ‘business strategies’ seem to have persisted (p. 142).

The last part of the book, titled “Media, State Interests, and Non-State Actors,” consists of three case-studies. Abeer al-Najjar, in “Framing Political Islam: Media Tropes and Power Struggles in Revolutionary Egypt,” presents a case study of the 2013 anti-Mursi and pro-Mursi demonstrations to show how media channels employed language and visuals to frame the Muslim Brotherhood as “terrorist” in order to legitimate state violence against the group (p. 145).

Another case study is presented by Zahera Harb in “Hezbollah, Al-Manar, and the Arab Revolts: Defiance or Survival?” Harb analyzes the discourse that Hezbollah, the Lebanese Shiite non-state activist group, adopts through its media channel, al-Manar. The group has maintained its message of “resisting the oppressor” in its media coverage of the uprisings (p. 166). However, the group, Harb concludes, lost the support of the Arab public when it employed the same message to justify its support for the Syrian government in the Syrian conflict.

In the last chapter of the book, Philip Seib examines the challenges that the new media presents to U.S. public diplomacy. The pan-Arab news channels, such as Al Jazeera, have made Arab viewers more skeptical of American policies within the Middle East. Social media has also allowed this public to share views, display their religious identities, and construct narratives that have challenged those of pubic diplomats. This is why, Seib concludes, U.S. public diplomacy needs to invest in technology and social media to enhance communication between the U.S. government and the Arab public.

Despite its eclectic choice of frameworks, this book fulfills its promise in showing the need for a more critical approach to a topic that has been widely discussed since the inception of the Arab Spring revolutions. In blending the critical with the descriptive, the book reflects the confusion and richness of the research in this evolving field. The volume, however, represents a historical documentation of scholarly research in the early stages of the uprisings. It needs to be supplemented by further research into the role these media platforms have played and continue to play in the subsequent turmoil that the region continues to experience today. Moreover, the book invests only minimally in the aesthetic and visual aspects of the different media it studies. Although it makes marginal reference to graffiti and murals, it fails to mention the issue of political cartoons, which faced censorship by political authorities during these revolutions.

The extensive range of insights included in this book, however, makes Bullets and Bulletins: Media and Politics in the Wake of the Arab Uprisings a good reading requirement for survey courses on this topic. It reflects the search for a frame to conceptualize the role of the media in the revolutions, and is thus a good starting point for researchers in communication and media studies to develop their own arguments and research agendas. General readers would also find their curiosity raised by a book that keeps questions open and answers unfolding in an everlasting and evolving quest. 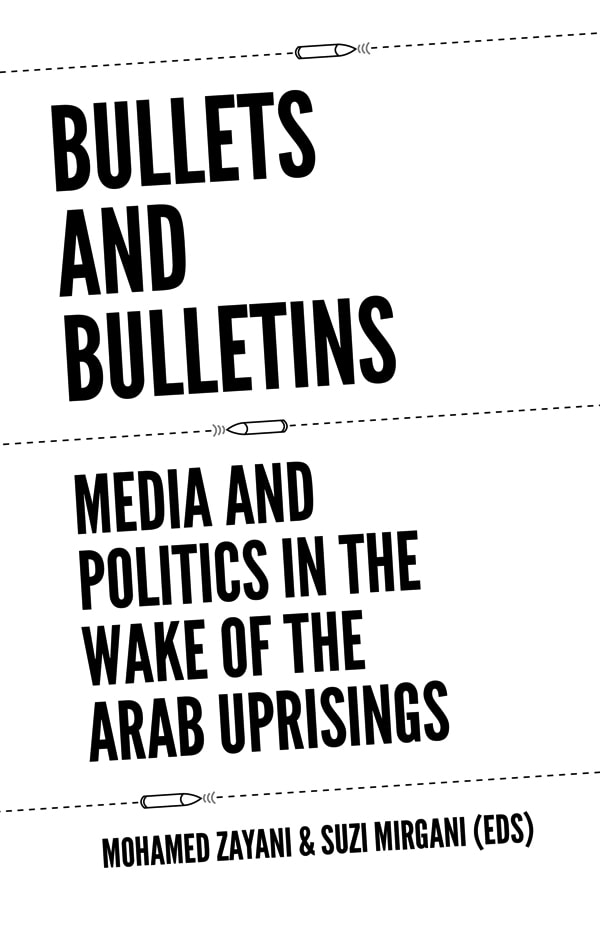