this book presents a holistic perspective of China’s presence in the discussed countries. Even readers unfamiliar with Chinese foreign policy and the BRI can grasp the general topic. This book, in general, sticks by China’s non-interference policy in each chapter. As mentioned earlier, some concepts like the Islamic world, are used unclearly and referred to very little. Nonetheless, it is very useful in terms of future suggestions. I recommend the book as a good reference for graduate students, academicians, and people who wonder how China works.

China, boasting the second-biggest economy in the world, pursued an enormous project called the Belt and Road Initiative (BRI) in 2013. This project aims to revive the ancient Silk Road in line with China’s economic targets. The book China’s Economic and Political Presence in the Middle East and South Asia, edited by Mehran Haghirian and Luciano Zaccara, investigates the relationship between China and Middle Eastern, North African, and Southern Asia countries within the framework of the BRI. The book presents a holistic perspective to understand China’s presence in different regions. While highlighting China’s non-interference policy in each chapter, the book underlines possible risks and opportunities for the countries in question. The book consists of 10 chapters (excluding the introduction) focusing on different areas.

The first chapter introduces Middle East and North Africa (MENA) countries’ relations with China under three main topics, namely economics, politicssecurity, and historical, ethnic, and cultural, by referring to the influence of external actors Russia and the U.S. This chapter analyzes the relations using the data from Chinese foreign direct investment (FDI) in MENA regions. With A Global FDI’s data, the chapter indicates Chinese expansion worldwide. Significantly, after the launch of the BRI project (in the period between 2015 and 2018), Chinese investment increased by 137 percent in the MENA region (p. 15). The data also shows that Chinese involvement with MENA countries is not only related to the energy sector but also extends to the transport and real estate sectors.

Chapter 2 analysis China-Iran relations by employing role theory. It first defines the middle and great powers and goes on to examine China-Iran role conceptions. The Iran Revolution and Chinese expansion after the 1980s provided that these states had similar “otherness.” For that reason, the chapter highlights “non-Western identity as the fundamental feature of Sino-Iranian relations” (p. 50). Chapter 3 presents a comparative analysis of the sanction’s effect on Iran. While Iran’s economic dependency on China increased amid sanctions, this also occurred in the peer countries at the same time, particularly following both the European Union’s (EU) and U.S.’ sanctions against Iran in 2016. In line with this comparison, Iran’s eastward turn was more circumstantial than strategic (p. 62).

Chapter 4 exposes China’s Middle East policy, especially in the context of the Gulf Cooperation Council (GCC). The chapter first expresses that after China became an oil importer in 1993, the importance of Middle Eastern countries increased over time. It later focuses on the developments that started with the BRI in the Middle East and also discusses the Arab Policy Paper and China’s engagement framework with the Middle East (the “1+2+3” cooperation framework) (p. 77). In line with existing literature, this chapter examines the energy sector and non-oil sector relations in the China and GCC context. As a result, it argues that “China’s non-interfering approach,” “its pragmatist attitude toward Iran apart from the U.S.,” and the GCC’s aim for diversification strengthened their relations. Chapter 5 also presents historical relations between the GCC and China. Drawing attention to the U.S.’ security provider role in the Gulf, this chapter explains that China used this secure setting for its material interests. Lastly, the chapter points out the Arabian Peninsula’s geostrategic importance in the U.S.’ Indo-Pacific strategy.

The sixth chapter begins with the hypothesis that Türkiye-China relations would most likely clash in the Middle East, particularly in the political, economic, and security fields. Avoiding this possible conflict, it suggests increasing China’s investment in Türkiye, attracting more Chinese tourists to Türkiye, and Türkiye’s integrating with BRI projects. Chapter 7 analyzes Russia-China relations, including Iran, via the Syria issue. While China, Russia, and Iran are an alliance at the global level, when it comes to Syria, salient divergences occur among them. The proof of this argument is China’s economic capability.

Chapter 8 explores the historical Israel-China relations and analyzes its effect on the U.S. and the Islamic world. This chapter differentiates China-Israel relations from ties with Islamic countries. It argues that though China-Israel relations are a product of “mutual admiration, economic complementary,” relations between Islamic countries and China arise from “cultural bonds and solidarity” (p. 170). The chapter also addresses U.S. concerns related to China-Israel relations, namely defense-related technology acquired by China and Chinese influence in Israel. In this context, though the Islamic world is mentioned, the concerns of Muslims and the definition of the term “Islamic World” are not clearly explained.

Chapter 9 discusses China’s relationships with Bangladesh and Pakistan in the framework of structural realism. In the anarchic regional order, great powers, including India and China, dominate, and small states need alliances to survive. Due to the contention between Pakistan and India, the chapter claims this tension brings countries together. Therefore, Pakistan aims to build a strategic balance against India. Bangladesh doesn’t share the same position as Pakistan, so it utilizes a hedging strategy with China versus India. Finally, the 10th chapter analyzes China’s approach to Afghanistan in the neo-classical realist theory. In light of the theory, the chapter focuses on the withdrawal of the U.S. from Afghanistan as a systemic change. On the other hand, the chapter claims that the overall change in China’s foreign policy increased the importance of Afghanistan. Both systemic and domestic changes advanced China’s involvement in Afghanistan, of course in line with the non-interference policy.

Overall, this book presents a holistic perspective of China’s presence in the discussed countries. Even readers unfamiliar with Chinese foreign policy and the BRI can grasp the general topic. This book, in general, sticks by China’s non-interference policy in each chapter. As mentioned earlier, some concepts like the Islamic world, are used unclearly and referred to very little. Nonetheless, it is very useful in terms of future suggestions. I recommend the book as a good reference for graduate students, academicians, and people who wonder how China works. 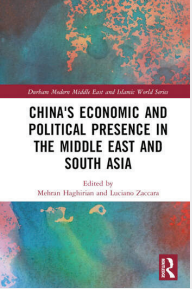