Church, State, and the Crisis in American Secularism

The United States supposedly is premised on “separation of church and state,” which means the American government should be neutral regarding religion. But is that really true? The author, a law professor and committed secularist, has strong opinions on this matter. Particularly since the 2004 presidential election that returned George W. Bush to the U.S. presidency for a second term, Ledewitz has been concerned that American secularism—both as an individual choice and a stance on the part of government—is under threat.

The United States supposedly is premised on “separation of church and state,” which means the American government should be neutral regarding religion. But is that really true? The author, a law professor and committed secularist, has strong opinions on this matter. Particularly since the 2004 presidential election that returned George W. Bush to the U.S. presidency for a second term, Ledewitz has been concerned that American secularism—both as an individual choice and a stance on the part of government—is under threat. Although the proportion of secular Americans has been growing rapidly in the twenty-first century, the successful marriage of religion and conservative politics in the U.S. might be inhibiting secularism from full acceptance as a valid alternative to religious commitment. After completing two earlier books on secularism in the U.S., Ledewitz reached the rather specific conclusion “that American constitutional law stood in the way of any serious engagement of secularism with religion” (p. xiii, emphasis mine). Thus, he sets forth in Church, State, and the Crisis in American Secularism to accomplish two tasks. First, he aims to detail how and why he feels current interpretation of “church-state separation” by the U.S. Supreme Court is problematic. Second, he endeavors to construct an alternative legal approach that would put religious people on common ground with secularists before the eyes of American law.

Ledewitz’s anxieties revolve around two crises he sees as plaguing contemporary American society. The first of these crises concerns the Constitution’s Establishment Clause, which reads “Congress shall make no law respecting an establishment of religion” and which (for all intents and purposes) prohibits any one faith from being promoted as superior, or somehow preferable, by any government entity. Over the last two decades, the U.S. Supreme Court has been moving away from a strictly separationist approach to Establishment issues (the approach that, for example, removed prayer from public schools in 1962) toward a more accommodationist approach; the Court today tends to be somewhat more permissive of public religious displays and practices (such as the national motto “In God We Trust,” the swearing of oaths on Bibles, or the public display of the Ten Commandments) so long as the government entities that permit them do not favor one faith over others. For his part, Ledewitz fears that the Court will abandon its commitment to neutrality in matters concerning Establishment entirely, making the public square especially hospitable to monotheistic—and especially Christian—religious displays and practices. Such hospitability could present a rather obvious problem for Americans who prefer secularism. The second crisis worrying Ledewitz is his perception—and he says this as a secularist himself—that secular Americans unthinkingly endorse strict separationism, thus failing to consider or appreciate religious perspectives and insights. That is, Ledewitz fears that secular Americans will gravitate so far toward moral relativism (out of visceral rejection of all things religious) that many will have no anchor whatsoever in thinking about what is right and what is wrong. American culture and law thus work together to create a false and unproductive division between sacred and secular, such that the sacred is symbolically elevated as preferable—and thus becomes anathema to—the secular.

Ledewitz’s solution is to construct a “doctrine of higher law” that would bring religious and secular voices into meaningful conversation instead of pitting them against one another. He desires a public square (and more specifically, a legal system) in which the moral insights of the world’s great religions are in dialogue with moral insights from secular traditions, putting all on equal footing and thus contributing to a rich, dynamic pluralism. However, such an outcome is implausible at best if the U.S. Supreme Court insists on favoring Christianity—which Ledewitz claims it does, blaming the Court’s move away from neutrality on pressure applied by the Christian Right (the successful political movement of conservative Christians since 1980), turnover in Court personnel (especially the addition of Justice Samuel Alito to the Court in 2006), and the tactical advantages the Republican Party continues to have over the Democratic Party any time simplistic “God talk” is included in political discourse.

Notwithstanding this complex of contributing factors, Ledewitz uses the doctrine of higher law to urge the Court in the direction of inclusiveness of the wide range of religious and secular communities in the U.S. That new course would depend on a strict adherence to the principle of neutrality. “Justice [Antonin] Scalia is wrong to think that just because the American people can render value judgments, they do not want a government institution to do so as well” (p. 71). Ledewitz proposes that the best way forward would be for the Court to allow government entities to use religious imagery in the context of “deeply meaningful secular lines that differ from, but do not conflict with, their original religious meaning” (p. 124). Thus religious signs and symbols could be used in to illustrate the normative value of concepts of “higher law” such as justice or rights—creating the common ground Ledewitz so sincerely seeks between religious and secular Americans.

This is an ambitious, rich, and rewarding book. Readers will learn a great deal about the place of religion in contemporary American politics, the U.S. Supreme Court’s treatment of “church-state separation” since the mid-twentieth century, and the complex dance between faith and secularism in America’s free religious marketplace. Not all readers will agree with Ledewitz’s normative concerns or with his solutions, but considering both is a task well worth undertaking. 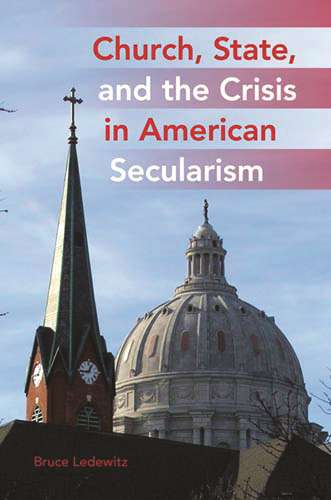