Conflict and Peace in Central Eurasia: Towards Explanations and Understandings tests a hypothesis that a mosaic type of ethno-geographic configuration in combination with other factors is an important condition in explaining the occurrence of ethno-territorial conflicts. Babak Rezvani analyzes a dataset of ethno-territorial encounters in the former Soviet Central Asia, the Caucasus and the region of Fereydan in central Iran during the period of perestroika and glasnost (p. 3). He accounts for these encounters with an array of features derived from social science theory and the geographical characteristics of regions thus making a contribution to the literature on international studies.

Conflict and Peace in Central Eurasia: Towards Explanations and Understandings tests a hypothesis that a mosaic type of ethno-geographic configuration in combination with other factors is an important condition in explaining the occurrence of ethno-territorial conflicts. Babak Rezvani analyzes a dataset of ethno-territorial encounters in the former Soviet Central Asia, the Caucasus and the region of Fereydan in central Iran during the period of perestroika and glasnost (p. 3). He accounts for these encounters with an array of features derived from social science theory and the geographical characteristics of regions thus making a contribution to the literature on international studies.

Rezvani creates a database of 129 ethno-territorial encounters, the units of analysis, in order to answer the research questions. The encounters are identified as having a conflict or not (the dependent variable) and by features that match up with the explanatory conditions (the independent variables). The author describes the encounters distinguished as ethno-territorial conflicts on the basis of specialist literature, puts forward case studies and analyzes the database by qualitative comparative and statistical methods. Importantly, he presents the theoretical framework of the study to determine and characterize the independent variables. However, the semantic field of “cultural content” definiens is not determined precisely, which hinders operationalization of the theoretical category. Rezvani states: “By cultural content I mean culture and cultural elements, or even – as they are often called – cultural markers in concrete and specific terms” (p. 23). Nonetheless, firstly, he suggests that “culture” and “cultural elements” have separate semantic fields whereas cultural elements are a part of culture. Hence, these pieces of data which meet the criteria of these two categories are overrepresented. Secondly, the definition shows how cultural elements may be called instead of determining distinctive features of the definiendum. Finally, the predicate “cultural” is the component of both the definiendum and the definiens, which means that it remains unspecified. It reduces the extent of the argumentation precision.

A vital section of the discussion on the research theoretical framework is a critical review of explanatory frameworks of an ethno-territorial conflict. Providing well-thought arguments and counterarguments, it assesses factors deemed to contribute to the occurrence of an ethno-territorial conflict. Nevertheless, it would be useful to rethink the relationships between the theoretical categories used to evaluate the explanatory power of some theories. That is, poverty and relative deprivation are introduced as conflict-generating factors while poverty may be concatenated with the relative deprivation in a sphere of property. Rezvani claims that it is debatable whether the relative deprivation between, and level of wealth among, various ethnic groups is a reason of an ethnic conflict. Yet, the relative deprivation theory is evaluated too perfunctorily because the discussion passes over classic works on the application of this theory to the studies on acculturation, cultural movements and conflicts, such as those by Bernard Barber and David Aberle. It would be useful to review the other types of relative deprivations such as those which occur in the spheres of behaviors, statuses and values in order to develop the variable depiction. Furthermore, the extent of applicability of the theory of relative deprivation is found to be low because it is considered to be useless to explain the conflict in the Basque country (p. 37). This case is worth exploring but it constitutes an implausible argument for the exclusion of the theory from the explanatory framework. If the approach were extended according to the recommendations, it would be interesting to verify it as the constituent of Rezvani’s explanatory scheme. Ultimately, a theoretical model of factors which explain an ethno-territorial conflict embraces: political grievances, ethno-geographic configuration, religious difference, linguistic difference, ethnic kinship, traumatic peak-experiences, economic grievances and ethno-political system. This innovative model is the first such a developed analytical tool employable to qualitative analyzes of ethno-territorial conflicts sources configurations. It is universal and highly useful because it allows the comparison of exemplifications of conflicts in a systematic and structured way.

However, the premises concerning ethnic kinship are worth revising because the explanatory framework of irredentism is based merely on Donald Horowitz’s theoretical approach toward irredentism (p. 266). In fact, there is no consensus in the specialist literature on how it is that the political subjects are claimants and Horowitz represents just one position. This and other differences between definitions of irredentism are presented well in Markus Kornprobst’s Irredentism in European Politics: Argumentation, Compromise and Norms, not considered by Rezvani. Actually, it would be useful to define irredentism in order to escape difficulties with the use of the variable in the analysis. In addition, omitting the most important works on irredentism, such as Stephen M. Saideman and R. William Ayres’s For Kin or Country: Xenophobia, Nationalism, and War, the author avoids verifying essential assumptions, i.e., that irredentism is more probable when the lost territories are inhabited by ethnic brethren who are relevant politically in a homeland and the content of nationalism concentrates on those kin.

Solving the research problemsempirically, Rezvani fully accomplishes his aim. He offers the results of the analysis of the ethno-territorial conflicts, which show that political instability, ethno-political subordination, religious and linguistic differences, the possession of territorial autonomy and demographic dominance therein, transborder dominance and contiguity to a titular ethnic kinfolk, a mosaic type of ethno-geographic configuration and traumatic peak experiences all explain the occurrence of ethno-territorial conflicts. Furthermore, he proves that religious and linguistic differences have lesser explanatory power in the cases.

Although the volume contains minor drawbacks, which indeed may be easily corrected, it offers well-conducted and verifiable research of high relevance to conflict studies. Arguably, it may even be treated as a model analysis for beginning researchers because the methodological and theoretical assumptions are clearly delineated and rightly applied to the empirical study. Overall, Conflict and Peace in Central Eurasia: Towards Explanations and Understandings contributes to international comparative social studies formulating and testing an original theoretical model of factors which may explain ethno-territorial conflicts. Finally, it presents in a readable way the proceedings of ethno-territorial conflicts in Central Eurasia and accounts for their sources contributing to Eurasian studies. Therefore, it is highly recommendable to scholars and a general reader interested in international studies. 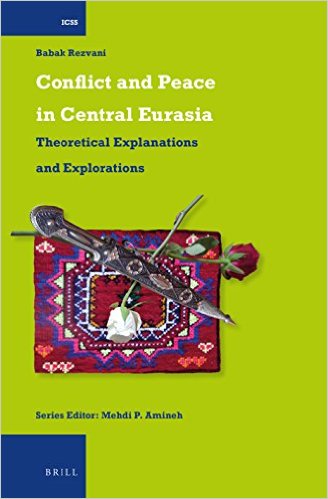