Cosmopolitan Anxieties: Turkish Challenges to Citizenship and Belonging in Germany

Ruth Mandel’s brilliant work entitled Cosmopolitan Anxieties: Turkish Challenges to Citizenship and Belonging in Germany very eloquently proves Migration Studies is not only about migration; it rather covers more than that. The book is composed of eleven chapters designed to discuss the history of Turkish presence in Germany with a particular emphasis on Kreuzberg and Berlin.

Ruth Mandel’s brilliant work entitled Cosmopolitan Anxieties: Turkish Challenges to Citizenship and Belonging in Germany very eloquently proves Migration Studies is not only about migration; it rather covers more than that. The book is composed of eleven chapters designed to discuss the history of Turkish presence in Germany with a particular emphasis on Kreuzberg and Berlin. Mandel’s anthropological perspective coupled with her long-term experience with the Turks in Germany and Turkey as well as with the issues of Alevi, Kurdish and Islamic presence in the Turkish diaspora makes this work very precious let alone the fact that she brings several different schlolarly names together in a very productive and persuasive way. As someone working on similar issues from a politica-anthropological perspective, I personally appreciated very much to see the names of Foucault, De Certeau, Derrida, Bourdieau, Lefebvre, Taussig, Balibar, Clifford and Appadurai used by Mandel to delienate everyday life of migrants and their descendants without essentializing their life worlds.

Mandel successfully scrutinizes the ways in which contemporary German identity transforms itself with respect to the Turkish origin migrants, who set up the category of new others. Similar to the story of the Jews, Mandel argues that there still continues the doctrine of inconvertibility of the Turks. Underlining the debates on historians’ debate, Leitkultur, Citizenship Law of the year 2000, and official reluctance in accepting the fact that Germany has become a country of immigration, German policies of citizenship and integration are far from considering both the Jews and the Turks as true converts to Germanness and Christianity. Mandel also reveals that both majority and minority identities in Germany are mainly constrained by social and economic changes following the reunification of two Germanys. Hence, she reminds us that one should not forget to scrtunize structural constraints while researching the construction and articulation of identities in any context.

What is very remarkable about this book is its successful coverage of three essential elements of the Turkish diasporic, or transnational, space, i.e., Alevis, Kurds and Islam. Mandel does not only refer to the heterogeneity of Turkish diaspora, but also goes into the detail of such a complicated heterogeneity. Her very elaborate ethnographic analysis of some of the basic stereotypes generated by Sunni Muslims and Alevi Muslims show how successfull she has been in developing a rapport with the native. She also very rightfully underlines that modernity is not a singular process, but rather plural/multiple, though without referring to Shmuel Eisenstadt who has previously coined the term ‘mutliple modernities’. Following the paradigm of multiple modernities, something which she failed to elaborate further, she claims that headscarf has recently taken on an additional symbolic dimension representing a form of resistance among young generations of Muslims.

One of the most original findings of the book is about the current returnees. She underlines that the lates returnees are mainly middle class and upper middle class individuals who have problematized the issue of recognition. Giving examples of those middle and upper middle class professional women who speak several languages other than German and Turkish, she displays that they are not feeling very comfartable in Germany as they are not recognized equally by their German peers, who cannot believe that Turkish origin women can actually compete with them in professional life. She claims that such German-Turks are seen as ‘plagiarized Germans’ by their German peers. Her testimonies also confirm that the latest returnees are qualified young generations, who believe that a life, maybe a better one, outside Germany is possible.

The format of the book is also successfully designed. The paintings and the photos give a very different flavour to the book. The paintings of Hanefi Yeter, a GermanTurkish contemporary painter, and the photos that the author took in her fieldwork days certainly bring an extra value to the book. However, those paintings and photos made and taken in 1970s and 1980s have the risk of misguiding the reader as well as essentializing the everyday life of Turkish migrants who have actually changed a lot as the author originally claims. The author should have also put the dates of the photos next to the explanatory photo headings in order not to misguide the reader. Another shortcoming of the book is that the author is too much preoccupied with the negative sides of the German policies of citienship and integration. I have the feeling that this has something to do with the subjectivity of the author. This is something legitimate in Anthropology. However, one should not also forget that Germany is one of those few countries, which have liberalized their citizenship policies in the last decade. The fact that Turks’ incllination to become German citizen has radically increased from an total of around 300 thousand in 2000 to more than 800 thousand proves that Turks have positively responded to the liberalization of citizenship policies. 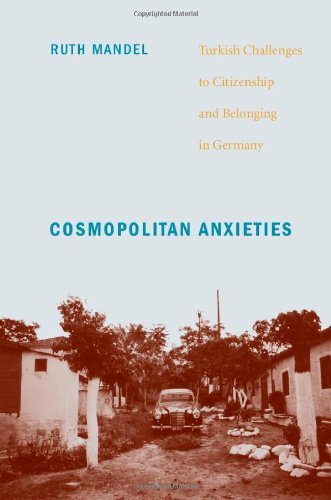 Turkish-German Challenges in the Light of German Federal Elections