Divided Nations and European Integration is a coherent collection of essays analyzing the effects of expanding European institutions on the politics of nations divided by state borders.

Divided Nations and European Integration is a coherent collection of essays analyzing the effects of expanding European institutions on the politics of nations divided by state borders. As the editors stress, they use the term “divided nation” to refer primarily to “one that contains leaders and organizations that minimally aspire to establish or reestablish closer linkages between the segments of their nation partitioned among states” (p. 5). Such divided nations exist —and have often been at the center of conflict— throughout the European continent, from Ireland to the easternmost provinces of Turkey, and it has often been assumed that integration processes through institutions like the European Union, the Council of Europe, and the Organization for Security and Co-operation in Europe (OSCE), may provide better accommodation for such nations and reduce the potential for conflict. Although the impressive amount of empirical data presented throughout the book offers insights into a variety of different processes, the general assessment of the volume is that such assumptions and expectations regarding Europeanization have been somewhat exaggerated, and “internal state history and politics have so far played the most important causal roles in shaping the fates of ‘divided nations’” (p. 384).

The volume consists of ten chapters framed by a valuable “Introduction” —a state of the art essay in its own right rather than an outline of the subsequent chapters— and a substantial Conclusion (pp. 341–391), both by McGarry and O’Leary, two of the editors. Chapters One and Two
—authored by Moore and Mabry respectively, the other two members
of the editorial group— are more general thematic contributions discussing the challenge posed by divided nations to theories of justice on the one hand, and the language politics of such nations on the other. The remaining middle chapters are ethno-national and geographic case studies of kin-state activism in Hungary, Romania, and Russia (Zsuzsa Csergő and James M. Goldgeier, Ch. 3), Basques (Zoe Bray and Michael Keating, Ch. 4), Albanians (Alexandra Channer, Ch. 5), Kurds (David Romano, Ch. 6), Croats and Serbs in Bosnia (Marsaili Fraser, Ch. 7), Irish (Etain Tannam, Ch. 8), Germany (Stefan Wolff, Ch. 9) and Cyprus (Tozun Bahcheli and Sid Noel, Ch. 10).

In the “Introduction” McGarry and O’Leary identify and challenge four bodies of liter­ature —“integrationism,” “accommodationism” (in both its “consociational” and “federal pluralist” variants), “security studies,” and “global justice theory”— which have failed to seriously consider divided nations, either by disregarding non-nation-state perspectives altogether, or ab initio rejecting the claims of divided nations. The shortcomings of global justice theory are deemed even more surprising since divided nations “generally make their claims in the language of justice rather than of status assertion” (p. 19). In examining this issue further, Moore (Ch. 1) implies that justice theories’ singular focus on individual equality is chiefly to blame for their disregard of “national groups that straddle borders.”

Mabry’s contribution (Ch. 2) is a well-placed bridge between the theoretical and the empirical sections. Focusing on language politics, it shows how individual rights and state sovereignty are also the primary principles followed in practice by European institutions, and as such, “proponents of minority language rights remain at the mercy of their own regimes” (p. 82). Successes in the recognition of minority languages, Mabry argues, have been more dependent on negotiations between minority populations and their states than on European integration.

Chapter Three can be read as another bridging chapter, introducing a deeper assessment of kin-state activism in Hungary, Romania and Russia, yet maintaining a more general comparative focus outlining some of the principal mechanisms driving the politics of divided nations, such as the importance of economic incentives and the positioning of the external kin in respect to the “national canon.” The overall conclusion of the chapter is that European integration, far from eliminating kin-state nationalism, has merely shifted nationalist strategies away from irredentism and population resettlement, while reinforcing the ethnocultural definition of nationhood in the region.

This assessment is largely shared by all the empirical contributions. For the “Basque nation” divided by the Spanish–French border but fully incorporated in the EU’s Schengen Area, institutional asymmetries caused by parallel historical trajectories have prevented unification, creating instead new ways of constructing Basque identity and leaving the idea of a “Basque community” a work in progress. Similarly to Basques, Kurds lack a state of their own, but their exposure to European institutional frameworks is radically different. Nevertheless, as the dedicated chapter argues, Turkey’s continued Europeanization, even if it falls short of an eventual EU membership, constitutes an advantage for the Kurdish nation as a whole, despite potentially creating further divides between Kurds living in Turkey and those in Syria, Iraq, and Iran.

For Albanians scattered in five different non-EU countries, such nationalist ideals as securing an independent state or unifying the “divided nation” have often emerged as conflicting causes over the past century. The limited Europeanization process has not “extinguished” either projects, but instead has facilitated a platform to balance the two.

Croats and Serbs in Bosnia and Herzegovina —similarly to Turkish and Greek Cypriots— have been less exposed to a “nationalizing state” —in a Brubakerian sense— but strongly influenced by their respective kin-states. However, while Croatia’s recent non-involvement policy offers —at least momentarily— a positive lesson, the kin-state activism of Greece and Turkey have put Cypriots in a situation from which they are yet to find a safe exit. The failure of EU diplomacy to broker the reunification of Cyprus before EU accession continues to haunt interethnic relations on the island, and uneven integration in the ex-Yugoslav region may also pose similar dangers.

The primacy of kin-state involvement over EU policy is also apparent in the case of Northern Ireland and Germany, but pervasive Europeanization makes it difficult to isolate the factors. The Irish success story of conflict resolution has been achieved mostly through inter-governmental negotiations, although EU funding and its rhetoric of multilevel governance and cross-border cooperation are assumed to have had a positive influence on underlying social processes. Germany has also based its post-war kin-state policy on inter-governmental agreements secured, nevertheless, by Germany’s “moderation” and its central position in the process of European integration.

What the well-chosen case studies ultimately show is that the positive outcomes of European integration for divided nations were achieved unevenly across Europe. In their “Conclusion” McGarry and O’Leary go beyond merely evaluating the contributions, and outline a “tentative” explanatory framework of the “variations in state policy toward ‘internal’ and ‘external’ minorities, one that does not rely on a misleading dichotomous contrast between west and east” (p. 366). Backed by the previous chapters, it is a very convincing comparative analysis, which shall necessarily constitute a starting point for any further investigation. Nevertheless, the analytical contrast between “European factors” and endogenous political and historical variables in explaining the impact of European institutions on divided nations also has the shortcoming of neglecting the various ways in which global actors and extra-European political-economic processes are more directly involved. Such a perspective could provide a more nuanced understanding of the exogenous factors evading European mediation.

While the main achievements of the volume lie in its coherence and comparative gaze, the detailed case studies —hardly any of which could be singled out as faltering in analytical depth and quality— will surely become staples on the bibliographies of researchers working on the respective geographical areas. The volume, therefore, is of value not only to scholars of nationalism, peace and security studies or international politics, but also to students searching for an entry point into political and area studies. 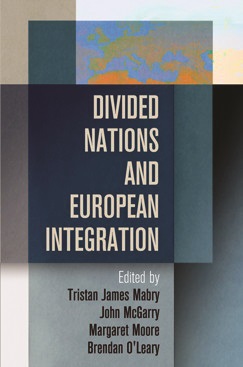