Drones: The Brilliant, the Bad and the Beautiful

Drones: The Brilliant, the Bad, and the Beautiful demonstrates that although the development of drones is still in its infancy, it has both benefits and downsides for humanity. Well-rounded and easy to read, this book is a good source for readers interested in ethics, AI technology, drones, and the critical interrogation of the social, cultural, and moral issues they provoke. In addition to its academic merit, the book will be of great interest to anyone interested in engaging in extensive philosophical discussions of the implications of drone technologies.

Drones have gained popularity thanks to emerging technology in recent years. Smaller in size than unmanned aerial vehicles (UAVs) and easy to use, drones are used in the military, the media, and agriculture. However, while drone technology benefits humanity in many ways, it has a negative side and requires many regulations to ensure its safe usage. In Drones: The Brilliant, the Bad and the Beautiful, Andy Miah, from the University of Salford, discusses the pros and cons of emerging drone technology while examining drones from an artistic aesthetics and creative perspective.

In the first chapter, Miah examines how drones have expanded into an immense consumer market in a very short period as one of the most popular, defining technologies of the 21st century. He provides readers with a historical perspective and explains the development stages of drones through a variety of examples. The book analyzes drone design, technological development, the approaches of private companies, and the ways in which drones add economic value (p. 31). The development of battery-control systems, 3D-modeling software, and refined camera technologies have made drones affordable for amateur electronic consumers, which represent a growing market (pp. 31-32). Miah explains the increase in drone popularity through the relations of organizations such as Facebook, Amazon, Google, and Apple with drone manufacturers such as DaJiang Innovations (DJI) and Phantom, drawing attention to what impact these relationships can have on the moral values of society (p. 50).

In the following chapter, the author discusses the regulation of drones. In this section, Miah states that institutions such as the United Kingdom Civil Aviation Authority (CAA) have set rules for drones since the early 2000s. He explores the difficulties of imposing legal regulations on drone use and the main tendency of these regulations. He asks, “Why should there be legal regulation for drones?” and addresses issues of both personal privacy and the weaponization of emerging drone technology through “the potential for camera-enabled drones to violate legal or moral expectations and personal privacy” (p. 65). Considering the lack of a definite legal framework, he expresses the inadequacy of current legislation in this regard. Finally, Miah cites the culture clash in camera technology as one reason for the lack of legislation on drones and observes that developing technology has caused an increase in ethical concerns that require deeper questioning.

Generally, technological advances are first integrated into military systems and later into civilian service. This trend applies to drones as well. Miah discusses the positive aspects Drones: The Brilliant, the Bad and the Beautiful of drone applications in various fields from health to entertainment and scientific research and critically questions these applications in the third chapter. Although drones are beneficial to society, he argues, the discourse of ‘using drones for good’ does not reflect reality (p. 86). Miah briefly examines the proposition that drone technologies are a force for good and critically questions its reality despite drones’ benefits.

The main content of the fourth chapter is the negative use of drones. This chapter focuses specifically on the military context to examine what it means for humanity to seek greater power on the battlefield. Here, Miah explores the societal implications of committing devastating acts of violence from faraway places while addressing broader questions of human relations at stake in such an age.

Using the subtitle, “Designing out Reality,” the book draws attention to the involvement of civilians in the process of drone development and the normalization of war actions through simulation technology and games (pp. 104-108). Given this normalization, it can be expected that players will behave according to their practices in simulation in the event of war. We can talk about the same situation for drone technology. Just as airplane pilots do not take over the airplane management in the real cockpit without receiving the necessary training in the simulator, it is possible for gamers ‒with minimal technical knowledge gained through play- to become drone pilots with the necessary training even if they are not professionals.

The negative factors mentioned in the fourth chapter are not exclusive to drones. For example, in parallel with the development of artificial intelligence (AI), there are discussions on ethics about the decisions to be taken by decision-making mechanisms to reduce the role of the human element in machine systems. Miah adds that since drone systems are still in the development stage, it is very difficult to determine the ethical content precisely.

The fifth chapter evaluates drone technology in terms of its creative applications. Miah examines the culture of creative drone innovation and artistic practice. The independence of drones from space, unlike artists, is emphasized by its power to influence the values of the world built by humans. However, in this study, the technological addiction of drone artists also reveals the necessity of teamwork, as it will tend to cooperate.

Throughout the book, Miah seeks to explain how drone technology has evolved and why drones are so appealing. He explores humanity’s conflicting feelings about this evolution as part of an ongoing, broader l debate about drones and the growing popularity of AI machines.

Drones: The Brilliant, the Bad, and the Beautiful demonstrates that although the development of drones is still in its infancy, it has both benefits and downsides for humanity. Well-rounded and easy to read, this book is a good source for readers interested in ethics, AI technology, drones, and the critical interrogation of the social, cultural, and moral issues they provoke. In addition to its academic merit, the book will be of great interest to anyone interested in engaging in extensive philosophical discussions of the implications of drone technologies. 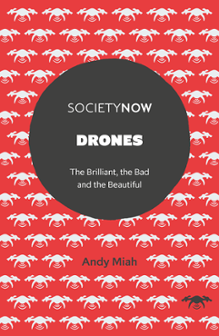 Potential Roles for Turkey as a Rising Regional Actor in Eurasia