The major successes of the book are, first, that it analyzes the multidimensional nature of the conflict in an overview, covering all aspects of the subject in a balanced manner. Second, referring to historical facts, data, figures, tables, and comparative analysis makes the study empirically strong.

With its longstanding geopolitical problems, such as the Israeli-Palestinian conflict, the Cyprus issue, the Aegean Sea dispute, and the Arab Spring, the Mediterranean region has historically been conflict-prone. The recent discovery of hydrocarbon deposits has further rendered the region one of the hottest issues in international politics. Eastern Mediterranean and Turkey: Political, Judicial, and Economic Perspectives, an edited book by Kemal İnat, Muhittin Ataman, and Burhanettin Duran, attempts to provide a timely reflection on recent developments in the Eastern Mediterranean and to place Turkey’s position within a broad framework. The book is composed of fourteen articles. It is divided into four parts that deal with different aspects of the topic. The overarching argument of the book, while each part includes its focus, is that Turkey is decisive in safeguarding its rights and national interests in the Eastern Mediterranean by pursuing a multifaceted policy and favors dialogue for a win-win solution. Outlining the political, judicial, and economic contours of the topic, the text also illuminates the role of regional and global actors in the crisis and suggests prospects for a solution.

The book begins by expounding the four determinants of Turkey’s policy toward the Eastern Mediterranean region: Turkey’s security concerns arising from regional dynamics, its economic interests, its historical and cultural ties with regional people, and its commitment to international law.

Part two elaborates on the geopolitical and geostrategic dimensions of the dispute in four chapters. First, presenting the historical background of the Cyprus issue, which remains unresolved and has become further complicated by the discovery of resources around the island, the authors focus on their argument that a fair settlement of the Cyprus issue is a prerequisite for resolving the Eastern Mediterranean dispute (p. 48). In the second chapter, they highlight the importance of the Mediterranean region throughout history by reminding readers of the Great Power confrontations and major turning points that have occurred there from ancient times to the last century and their effects on world history. However, trying to summarize almost the entire history of the region in one chapter may seem a bit distractive.

The third chapter provides a critical analysis of the interests and policies of some prominent actors –the EU, France, Italy, the U.S., and Turkey– toward the Mediterranean, to prove that the Eastern Mediterranean dispute is not only a matter of energy, and not only the concern of regional countries, but a means of power competition. The EU’s initiatives in the region have failed because of disagreements within the Union, in which France and Italy act more independently (p. 104). The American strategy has a hegemonic feature related to the growing Russian presence and the Russian-Turkish rapprochement in the region as of 2015, escalating the geopolitical rivalry, which the author calls “the new Mediterranean Cold War” (p. 93). Within the framework of its dual containment policy, the U.S. supports the Greece-Greek Administration of Southern Cyprus (GASC)-Israel-Egypt alliance in the Eastern Mediterranean, despite political risks (p. 117). Turkey’s Mediterranean strategy is basically related to protecting its sovereign rights and national interests; with this aim, it is resorting to all measures, including military deterrence (p. 119).

The fourth chapter comparatively evaluates the balance of military power among the regional and global actors based on both qualitative and quantitative criteria. The author aims to determine which actor has more deterrent capability and whether external actors will be able to intervene in any crisis in the Mediterranean. The argument that “power overtakes the law on the Eastern Mediterranean issues, as in Libya” (p. 127) demonstrates the reason for this analysis and the increasing armaments and military exercises of the regional countries. In terms of naval force, airpower, and air defense capabilities, each actor has both superiorities and needs to develop its abilities in different fields. Turkey, Israel, and Greece are the leading military powers in the region and therefore have the potential to pose a threat against each other (p. 135). Although France, Britain, and Italy have significant military power, their deterrence capabilities in the region are limited compared to those of the U.S. and Russia (pp. 142-158). The author concludes that besides acting under international law, having military power is an absolute necessity (p. 159).

Part three, probably the most compelling part of the book, despite containing repetitions, addresses the principal cause of the Eastern Mediterranean dispute, namely the delimitation of maritime jurisdiction zones (p. 206). The authors discuss whether the arguments of the coastal countries have a legal basis or not. After providing the background of the subject and comparing the perspectives of the coastal countries, they briefly explain the concepts of Territorial Waters, Continental Shelf, and Exclusive Economic Zone (EEZ), the differences between them, and which rights they grant to the coastal states under the Law of the Sea (UNCLOS). Additionally, the fundamental principles and rules of international maritime law that must be followed in the delimitation of maritime borders are listed. Nasıh Sarp Erguven refers to previous maritime jurisdiction cases heard in the International Court of Justice (ICJ) and relevant International Court decisions, which were resolved through case-by-case assessment, to draw implications and provide guidance for the dispute between Turkey and Greece. Regarding the influence and status of the islands, especially Kastellorizo, in the delimitation, he infers that the Greek islands cannot legally have any Continental Shelf and EEZ (p. 240). Last, Mustafa Başkara proposes that the parties adopt the Joint Development Agreement model, which has helped solve many disputes and has been offered by the Turkish side to the GASC, as the most suitable method among the alternatives (p. 267).

The last part looks at the economic and energy dimension of the Eastern Mediterranean dispute, presenting the general outlook of the economic situations of the regional countries, their reserves, and the link between economy and politics. It emphasizes the importance of energy resources for Libya, Egypt, Syria, and Lebanon, which are experiencing political instability and economic problems, and points out their failure to commercialize their vast energy resources (pp. 276-295). Later, it briefly talks about the three alternative routes for natural gas transfer and discusses why the Turkey route is more advantageous than the EastMed Pipeline Project and routing Liquified Natural Gas (LNG) through Egypt and Israel (pp. 302-315). Finally, it mentions the two primary objectives of Turkey’s increasing explorations and drilling activities accompanied by its military presence in the sea: reducing its energy dependence and safeguarding its rights against the unilateral behaviors of the GASC (p. 336).

The major successes of the book are, first, that it analyzes the multidimensional nature of the conflict in an overview, covering all aspects of the subject in a balanced manner. Second, referring to historical facts, data, figures, tables and comparative analysis makes the study empirically strong. One of the book’s biggest flaws is that certain information and comments are repeated throughout. Although the authors mostly base their interpretations on facts, they sometimes fail to avoid a nationalist approach. Therefore, some subjective, idealistic, even normative statements within the texts appear, for instance, “they [European countries] have a lot to learn from Turkey” (p. 28). It would be great if the book’s arguments on conflict and cooperation were supported by theoretical approaches to international relations. All things considered, however, this concise, descriptive, and easy-to-read work can be a handbook for those studying the topic and those who are interested in finding out what is going on in the Eastern Mediterranean and understanding Turkey’s perspective. 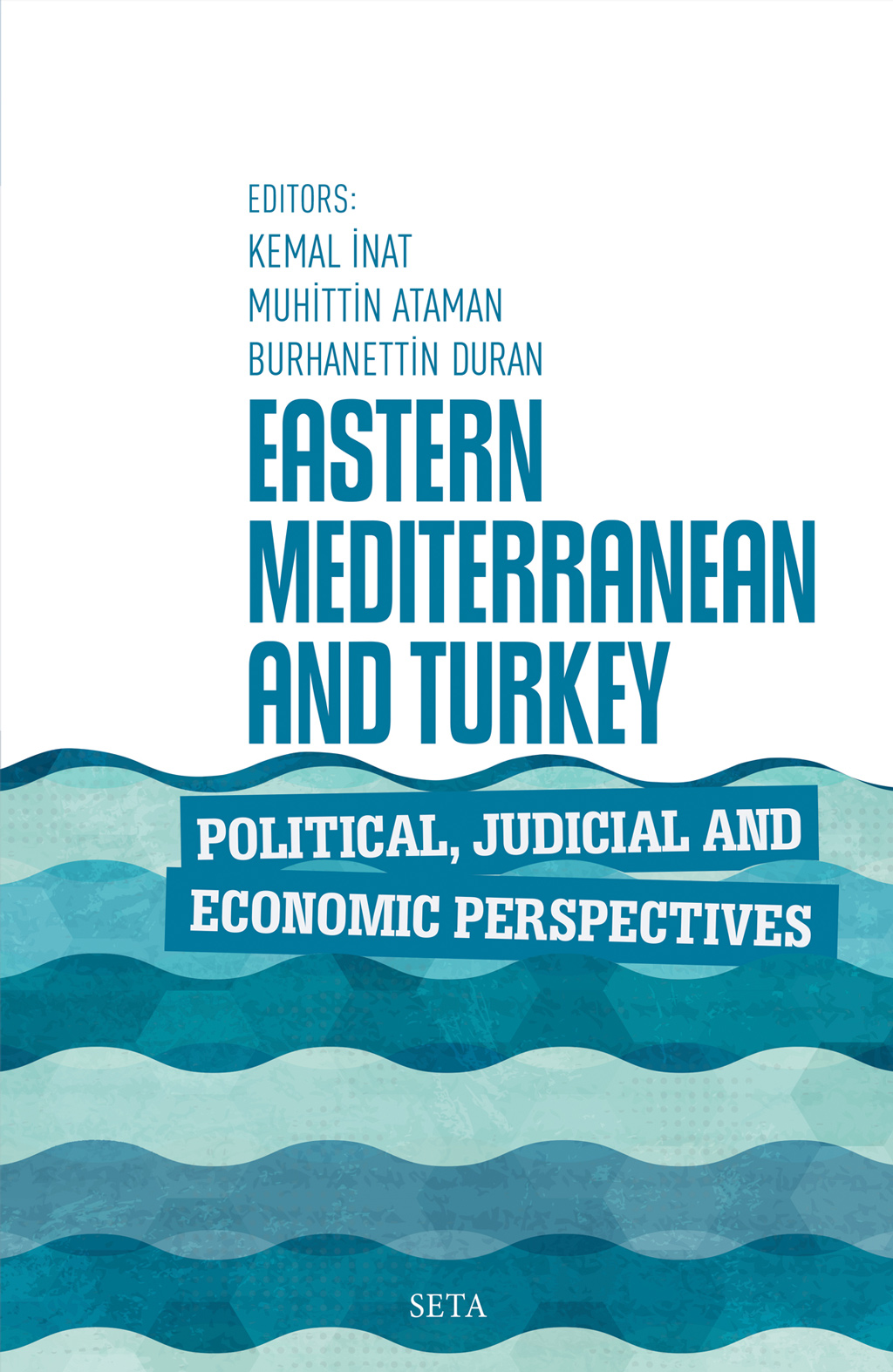