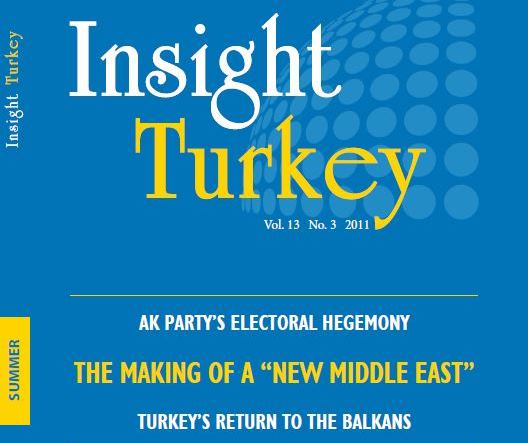 While the Arab Spring is introducing “people power” into the authoritarian political realms of the Middle East, Turkey held another general election on June 12, which presented the people with an opportunity to remove the AK Party that had been in power for nine years. But the people of Turkey opted for yet another term in office for the AK Party. As expected, the party won a landslide victory, capturing 327 seats out of 550, a very comfortable majority in the parliament. What was astonishing was the ability of the AK Party to increase its votes to 50 percent of the total after almost a decade in government.

For the first time in the history of Turkish democracy, a political party has won three consecutive elections by increasing its share of the vote. This is a phenomenal success that has to be studied by political scientists. What Turkey may be witnessing is the emergence of a “dominant party system,” an argument which is thoroughly examined in this issue of Insight Turkey by Professor Ali Çarkoğlu of the Koç University.

Prior to the rise of the AK Party Turkish politics used to be marked by fragmentation and the volatility of voters. It suffices to remember that from 1987 to 2002 five general elections took place, and a different political party won each election. In those days, to have a 30 percent vote share for a single party was like a miracle, and there was no political party that won a consecutive term, indicating the fluctuating choices of the people for political parties. Whatever the people might have found in the AK Party since 2002, they have continuously voted for it.

The magic, I think, is that the AK Party appears to have stood for change and stability at the same time. While change means new opportunities, stability guaranties holding onto what is already at hand. The AK Party manages to cut across the diverging expectations of the people who come from all different ideological and ethnic backgrounds. Among its voters are the poor and the rich, Turks and the Kurds, the Islamists as well as the liberals. What is common to them all is that they see the AK Party as a ladder that will take them up in terms of economic, social and political status. That is to say, the AK Party functions as an agent of social mobilization for those who strive for it.

Yet this is not the whole story: The democratic performance of the ruling party is also important for attracting voters. People who vote for the AK Party are mainly conservative, patriotic and democratic with a “center right” political leaning. They demand services and wish to have better living conditions, but they also want greater democracy, civilian control of the military and the non-interference of the state in their private affairs, including what they believe in.

For these people, the AK Party has meant the taming of the Jacobin-Kemalist state and keeping its institutions and ideology under control. Thus the AK Party, for them, stands for expanding the realm of freedom, freedom of entrepreneurship as well as freedom of religion, association and expression.

The election results also mean that the Republican People’s Party (CHP), the main opposition party, has lost once again. In fact it has never won an election in the entire history of free elections to form a single-party government in this country. As a party originally conceived as an instrument of the state to “enlighten” the masses under authoritarian rule, the CHP finds it hard to compete with other political parties in a competitive democracy. Irrespective of the rhetoric of change, Kemalism still haunts the CHP, which remains a party of a minority that is composed of staunch secularists, Kemalists and the old elite in bureaucracy and business.

The CHP appears as the party of the “old Turkey,” and as such it is unable to win elections in the “new Turkey” where the official ideology is dead, and the institutions that would impose it on society have lost their power in the process of democratization. More importantly, in the “new Turkey” people are increasingly celebrating their differences, be they ethnic, religious or ideological, as opposed to the homogenized vision of the nation defined by Kemalism. And authoritarian politics, the command economy and a disciplined society, the core of Kemalism, enjoys neither ideological nor popular support in the “new Turkey.”

However, to build a post-Kemalist Turkey with a consolidated democratic regime two major challenges remain: to solve the Kurdish question and to make a new, liberal, democratic and pluralistic constitution. These are the top two issues expected to be tackled by Turkey’s newly elected parliament.

While Turkey has been pre-occupied with the election at home, the winds of change continue to blow in the Middle East. This issue of Insight Turkey, in addition to introducing an intriguing debate on “Neo-Ottomanism in the Balkans,” examines the responses of the United States, Russia and the European Union to the Arab Spring, and assesses the potential of the Syrian opposition to deliver a change in their country.