The wave of mass protests that swept through the Arab World in early 2011 highlighted the distinct role of the internet-based media tools and networks. In their book, Egyptian Revolution 2.0: Political Blogging, Civic Engagement, and Citizen Journalism, Mohammad El Nawawy and Sahar Khamis show how the new media have become effective mobilization tools. By focusing on the Egyptian blogosphere, the authors shed light on the role played by political blogs in “paving the road for the Egyptian popular revolution of 2011” (p. 2).

The wave of mass protests that swept through the Arab World in early 2011 highlighted the distinct role of the internet-based media tools and networks. In their book, Egyptian Revolution 2.0: Political Blogging, Civic Engagement, and Citizen Journalism, Mohammad El Nawawy and Sahar Khamis show how the new media have become effective mobilization tools. By focusing on the Egyptian blogosphere, the authors shed light on the role played by political blogs in “paving the road for the Egyptian popular revolution of 2011” (p. 2).Over the six chapters of the book, the authors contend that political blogs provide a venue for exercising and exemplifying acts of resistance and empowerment, and act as catalysts for political change by providing vital platforms for discussion and debate. To prove this argument, the authors adopt a qualitative research analysis, namely textual analysis and in- depth interviews, of five Egyptian political blogs to highlight their role in “encouraging civic engagement and public participation” (p. 3).

In the first two chapters, the authors set the conceptual foundation of the monograph and explore the literature on the potential democratizing effect of the internet with a special focus on political blogging and cyberactivism, in particular, in Egypt. They show “how political blogging can actually energize and revitalize civil society through boosting and encouraging the growth of active civic engagement and actual political participation” (p. 27). Discussing the transformative nature of the Arab media landscape, the authors explore how the new media encourages political change and paves the way for democratization. The authors, then, analyze selected threads from the five blogs under study. They classify the threads based on their intended function: mobilization (urging people to engage in a certain action or activity), documentation (documenting the atrocities and wrongdoings of the regime in power and its security apparatus), or deliberation (providing a platform for the useful exchange of ideas and brainstorming).

While chapter 4 focuses on human right’s violations- related threads, chapter 5 tackles specific threads exposing the corruption of Mubarak’s regime. The authors establish the relationship between these threads, on one hand, and civic engagement, citizen journalism and a vibrant civil society, on the other hand. In the final chapter, the authors sum up the key findings of the book and stress the significance of the results for a better understanding of the phenomenon of “electronic democracy.” Relying on “the embedded media perspective,” the authors reiterate the argument that individual users are responsible for taking advantage of the capacities, and overcoming the constraints, provided by communication tools (p. 208). The authors raised one main question “[w]ill the Egyptian bloggers be able to play as an effective a role in building civil society in the “New Egypt” as they did in toppling a corrupt regime?”
(p. 216). They, however, did not provide a clear- cut answer, expressing only their hope.

The book, without a doubt, fills a lacuna in the literature on the role of new media in enhancing civil society and, consequently, democratization. It offers a balanced perspective that stays away from “technological” or “societal” determinism. Nevertheless, the authors’ tone appeared to overemphasize the bloggers’ role. For example, the authors argued that “there is no question that all five [blogs] have strongly contributed to mobilizing the Egyptian public and enhancing the Egyptian youth’s level of civic engagement” (p. 201). They also stressed that “blogs paved the way for the eruption of the revolution” (p. 3). This exaggerated role of blogging may have resulted from the book’s scant reference to its interrelationship with satellite media. Blogs were part of a changing media sphere in the Arab world where the Arab audience were exposed to different views and the discussion of what used to be taboo issues. It is sometimes difficult to evaluate the role of blogs in the Arab uprisings apart from that played by satellite media. This is particularly the case with the Egyptian revolution. The authors also did not discuss much about the other side of the blogging phenomenon. It is true that blogging and online activism could enhance civic engagement. Conversely, it is also true that it may negatively affect interpersonal trust and feed societal and political polarization. This was obvious in the Egyptian case after the revolution where online engagement, largely, reinforced one’s own prejudices.

There are times throughout the book where the reader would have appreciated any reference to the change or continuity in the bloggers’ perception of themselves and their role in society, especially that the authors conducted the interviews before and after the revolution. For example, the authors referred to their interview with Nawara Negm in 2009 and mentioned how she perceived the bloggers’ role as, at best, “complementary or supplementary to real- world organization, activism, and leadership, rather than being a substitute or a replacement for it” (p. 149). The reader cannot help but ask how this opinion could have changed after the revolution giving the feeling of empowerment that many of the bloggers acquired immediately after Mubarak stepped down.

Despite the authors’ appropriate methodology for the topic; they did not convincingly justify their choice of these particular five blogs. The authors’ criteria of selecting the bloggers was not very clear especially when we see that they did not represent the leftists in their sample. It is hard to see, for example, why Mikael Nabil was picked rather than Alaa Abdel Fattah, both being famous Egyptian bloggers and activists. The same applies to the author’s selection of the analyzed threads. They did not say why particular threads were chosen rather than others: was it the number of comments, the level of interaction…etc..

The classification of the threads were sometimes also problematic. For example, the authors analyzed a thread generated by Wael Abbas where he posted bank documents in English that allegedly estimate the ousted President Mubarak’s fortune by a nominal face value of $ 620,000,000,000 (p. 157). The authors classified this post as a “good example of citizen journalism…[as] Abbas did not try to influence the opinions of the posters… Moreover, he made sure to mention that there was no way for him to verify the authenticity of these documents” (p. 159). Knowing Abbas’ advanced English skills and noticing the over-exaggerated figures, it is hard to believe that Abbas did not truly know if the papers were forged or not. If we add to these elements the fact that he posted it on February 2, 2011— in the heydays of the revolution— it is difficult to see that its nature is anything but mobilization. It is also remarkable how the authors did not mention whether Abbas posted any updates clarifying whether the documents were indeed authentic or counterfeit.

El Nawway’s and Khamis’ book is an essential reading for those interested in online activism. It articulately shows us how social media is increasingly changing the way politics operate. It leaves us with two major questions. First, is social media more effective as an accelerating tool of social protest than being a powerful tool in enhancing democratization, state building and managing political competition in post-revolutionary situations? Second, how and to what extent is blogging able to influence political realities in Egypt after July 3, 2013 in light of the, unmistaken, strong comeback of authoritarianism? 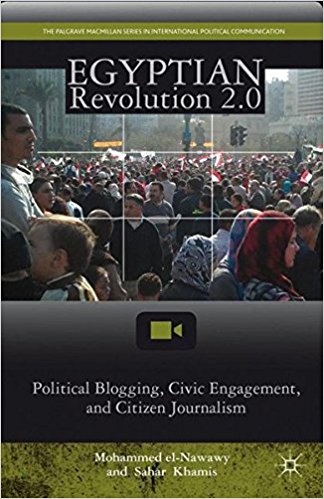