With the assertion of being the first complete history of Central Eurasia from ancient times to the present day, Christopher Beckwith’s Empires of the Silk Road is a complex and well argued book. Beckwith unites the history of the peoples of the world’s largest landmass into a remarkable history by describing the rise and fall of the great Central Eurasian empires such as the Scythians, the Huns, the Turks, and the Mongols under Genghis Khan.

With the assertion of being the first complete history of Central Eurasia from ancient times to the present day, Christopher Beckwith’s Empires of the Silk Road is a complex and well argued book. Beckwith unites the history of the peoples of the world’s largest landmass into a remarkable history by describing the rise and fall of the great Central Eurasian empires such as the Scythians, the Huns, the Turks, and the Mongols under Genghis Khan.

The book is composed of twelve chapters, a prologue and epilogue, and two appendices exploring the spread of ProtoIndo-Europeans and Central Eurasian peoples. Each chapter opens with a brief summary of the arguments in the chapter and that makes for easier reading. The other strong aspect of the book, in addition to the footnotes, is that there is an extended set of endnotes that elaborate on the topics discussed in the text.

The author’s aim is to clarify some issues in Central Eurasian history through writing “a realistic, objective view of the history of Central Eurasia and Central Eurasians” (p. xii). Beckwith rejects the stereotypes of pastoral nomads as warlike, difficult to defeat, poor, and entirely distinctive peoples. Throughout the book, he seeks to refute the popular notion of Central Eurasians as barbarian nomads (see especially the Epilogue). He argues that agrarianism and urbanism were both part of the steppe empires and the central economic dynamic in the interaction between steppe peoples and the agrarian peoples was trade: “the trade in luxury goods (along the Silk Road) constituted a very significant part of the internal economy within Central Asia” (p. xii).

Beckwiths’s main arguments and approach can be seen in the Prologue. There Beckwith builds the argument that a cornerstone of the “Central Eurasian Culture Complex” is the socio-political ideal of the heroic lord and his comitatus, a war band and his friends sworn to defend him to the death (p. 12). Maintaining such a system required significant resources, which were most efficiently obtained through trade and tribute. Accordingly, Beckwith’s second major argument that trade was the basis of the Silk Road economy and not raiding, which was instead used only when avenues of trade were closed. In all chapters, trade is the key element of his argument and the answer to the question of “why trade?” is the leader’s need to acquire goods to support himself and his comitatus.

The author conceptualizes Central Eurasian history in terms of the continental and the periphery. He sketches a historical pattern in which a Central Eurasian people build a trade-based empire in which its economic and cultural achievements attract the attention of regional powers on the periphery. When the regional powers expand inward, they disrupt the trade networks that maintain comitatus-based societies; having conquered Eurasia, the regional powers gradually decline themselves, and the cycle repeats.

In the subsequent chapters, he examines different empires and periods. The second chapter is devoted to the rise of the first steppe empire, the Scythians. In that chapter he notes that the classical philosophical works were produced approximately in the same period and this might be due to the effects of the far-reaching Silk Road trade system. In this chapter he emphasized that Central Eurasia was not simply a conduit, but “an economy and world of its own” (p. 74).

In the third chapter Beckwith analyses the rise of the Roman and Chinese empires. He argues that the attempts of China and the Rome to conquer the Central Eurasians were not sustained, probably because they curtailed trade. The resulting internecine fighting led to a decline in the size of Central Eurasian cities, and probably contributed to the relative collapse of the classical civilizations.

In the fourth and fifth chapters he discusses the Huns and the rise of the Türk Empire. During this period, the Central Eurasian Cultural Complex spread from Europe to Japan and he suggests that this was when nations began to be defined by people “bound by oaths” (p. 107) and the lack of sharp geographical divisions on the steppe allowed easy movement, whereas among the peripheral agrarians states borders were “macrocosmic reflections of the borders between agricultural fields” (p. 108).

In the chapters 6 and 7, Beckwith argues that in a 13-year period in the eighth century “every empire in Eurasia suffered a major rebellion, revolution or dynastic change” (p. 140): The Türk dynasty emerged following Uighur, Byzantine and Tibetan rebellions, and Abbasid and Carolingian revolutions. He notes that, most of these “were led by merchants or people closely connected to merchants and international commerce” (p. 141). During that period, world religions, accompanied with literacy, spread widely across Central Asia and trade shifted further north. Additionally, because of transactions between peoples, new technologies, such as paper, were transferred from China to the West. All those changes and developments suddenly collapsed in the ninth century and Beckwith’s explanation is not sufficient. Then, the rise of many small princely states and economic recovery started. The small size of the states allowed for more movement and intellectual growth. Islamic science and philosophy arose in Central Asia at this time and spread throughout the Islamic world, and later to Europe.

In the chapters 8 and 9, Beckwith focuses on the Mongol Empire which turned most of Eurasia into one commercial zone, spread many of the new Chinese inventions, and helped the spread of deadly diseases. During the Timurids and under Tamerlane the urban areas became the cultural and political center of Eurasia for the first time. While the Mongols facilitated trade they did not change the cultural and ethno-linguistic divisions in Eurasia. By the 15th century maritime states were raised in the Central Eurasia. While Russians spread to the coasts, the Portuguese and Dutch entered the eastern oceans. The Ottoman and Mughal empires were also rising in that period. This was an era when the littoral states began to surpass the continental states as centers of trade.

The main narrative of the 10th chapter is related to how the Silk Road was closed by the late 17th century leading to the partitioning of Central Asia. He discusses the rise of European domination of the Central Eurasian littoral which eventually put the Silk Road out of business. For Beckwith the rise of the littoral trade was not “imperialistic colonization but international trade” (p. 250). With the collapse of large pastoral nomadic states and associated trading cities, the Silk Road was no longer nourished, and faded away. As a consequence, “Central Eurasia suffered from the most severe, long-lasting economic depression in world history” (p. 261).

Chapter 11 is concerned with the spread of modernism throughout Eurasia. Beckwith suggests that the “Central Eurasian culture suffered the most of any region of the world from devastation of Modernism in the twentieth century” (p. 288). The closing chapter examines the contemporary era, what Beckwith sees as the fourth regional imperial era. After the collapse of the Soviet Union most of Central Eurasia again became independent but had no unifying agency. In this new period, the author hopes that the new Central Asian states will recover economically and culturally. Beckwith argues that much of modern world culture does come from Central Eurasia, not the agrarian peripheral states of the earliest civilizations. The real homeland of Europe is Central Eurasia and he hopes that the new Central Eurasia would create “an enlightened, liberal confederation like the European Union” (p. 313).

In sum, despite the fact that Beckwith’s determination to avoid macro theories handicaps him from exploring causality, Empires of the Silk Road is appealing to both general and academic audiences. His arguments are persuasive, and are backed by considerable empirical evidence. His clear writing and helpful system of notes make the book an interesting Central Eurasian perspective on world history. 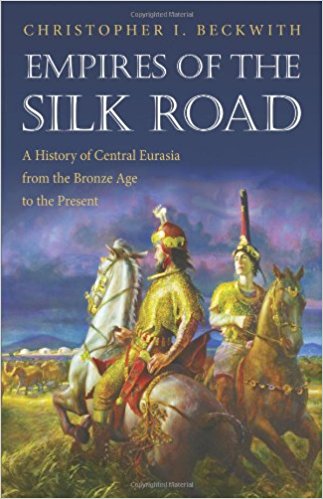