Eternal Dawn: Turkey in the Age of Atatürk

In Eternal Dawn: Turkey in the Age of Atatürk¸ Ryan Gingeras deals with the origins of modern Turkey and its founder, Atatürk. Studies of this subject have never been scarce in the literature.

In Eternal Dawn: Turkey in the Age of Atatürk¸ Ryan Gingeras deals with the origins of modern Turkey and its founder, Atatürk. Studies of this subject have never been scarce in the literature. Unlike most of the previous works in the literature, Gingeras argues that the image of Atatürk and his reforms lose their magnificence when you take a closer look at his era. The author claims that the reforms and developments of Atatürk’s regime have been over-glorified and that the realities of the re-establishment of the Turkish Republic are not congruent with the triumphant rhetoric surrounding it. In Eternal Dawn, Gingeras promises readers a different approach with his sharp, objective perspective. He points out that other published works on this topic tend to overlook the different social groups of Anatolia in the grand scheme of events. Gingeras claims that his focus is not solely on Atatürk and his reforms, but also on how these groups reacted to the changes Atatürk introduced.

The first chapter takes the story back to the foundation of the Committee of Union and Progress (İttihat ve Terakki Cemiyeti, CUP) and the road to the 1908 Revolution. Similar to most works dealing with modern Turkey, Gingeras begins his work with the last decades of the Ottoman Empire. Since Atatürk and other important figures of modern Turkey had been affected by the final years of the Empire, Gingeras argues that one should take the origins and ideology of the Young Turks into account. In this chapter, Gingeras also evaluates CUP’s leadership’s views on Atatürk’s rise to power in Ankara and the position the CUP assumed during the National Struggle, a subject long debated among scholars. Gingeras argues that while Ankara and the exiled CUP leaders kept somewhat in touch during the National Struggle, by 1921, the CUP leaders had found themselves alienated from the Ankara government.

The second chapter deals with World War I (WWI) and the National Struggle in great detail. Here, Gingeras evaluates the conflicts and struggles among different political and military leaders of Ankara, both during and after the National Struggle. He also highlights the place Atatürk held in the CUP organization during the foundation, rise, and decline of the group. Gingeras argues that despite Atatürk’s various statements claiming that he did not play an essential part in the CUP organization, he was still an important part of the CUP and owed most of his network, which played a key role in the resistance against occupation, to the Committee. In this chapter, Gingeras also discusses why most of Atatürk’s close friends slowly but steadily fell from favor following the end of the National Struggle, a topic that should be emphasized while evaluating the realities of the foundation of modern Turkey.

The third chapter focuses on the subsequent years of the National Struggle during which the national identity Atatürk envisioned for Turkey was shaped. The author claims that Atatürk’s ambition to create a Westernized and secular Turkey eventually caused him to draw away from the day-to-day affairs of politics. The author argues that Atatürk’s special attention toward creating an alternate history for Turkey, as well as his worsening health, defined his final years. In this chapter, Gingeras also evaluates Turkish nationalism from the beginning and discusses how Türk Yurdu (Turkish homeland) and Ziya Gökalp’s understanding of Turkism became the primary influence on the state ideology. He argues that with each reform introduced, Turkish citizenship became more and more about specific traits associated with being a Turk.

In chapter four, the author evaluates reactions from various ethnic, religious, and ideological groups toward the cultural revolution. Gingeras claims that the Republican People’s Party (RPP) regime deemed the local leaders in the East as a serious obstacle against the reforms. To solve this problem, Ankara decided to replace the local leaders with young ones and introduced the People’s Houses (Halk Evleri), a state-sponsored community project founded in 1932. The author states that the People’s Houses created social cleavages between generations that can still be observed today. He also argues that Atatürk’s ambitions often clashed with the country’s diverse profile, which caused the population exchanges and settlement policies to be motivated by Turkist tendencies. In this chapter, Gingeras also evaluates how the cultural reforms redefined gender roles, towns, and leisure-time activities. In this regard, the author claims that abiding by the new reforms did not necessarily mean that a person fully comprehended or supported these changes.

In chapter five, the author proceeds with his evaluation of different social groups’ reactions toward the reforms. He mainly concentrates on various Muslim groups and the RPP’s actions to subdue them. Gingeras argues that the Circassians and Laz were never deemed a significant threat to the Republic, but still, their languages and cultural identities were subjected to censorship. Regarding Alevis, he argues that while one group in the government considered Alevis as more liberal and integrated than the Sunni peasants, some others deemed the Alevi identity unfit for the orthodoxies of Kemalism. In addition to the Alevis, Gingeras also surveys the government’s reaction toward Muslim reactionaries. Here he makes an interesting argument, claiming that the state was rather open to negotiation when it came to these groups, yet less prone to provide the same space for negotiation while dealing with the Kurds. He claims that the government’s Kurdish policy bore similarities to Talat Paşa’s social engineering instead.

The final chapter of the book serves as a conclusion. In this chapter, the author discusses the death of Atatürk in 1938, İsmet İnönü’s succession, and the turbulent relationship between the two presidents. The author suggests that while İnönü and Atatürk’s relationship was strenuous at best during Atatürk’s final years, the military support behind İnönü helped him run unopposed in the election. According to Gingeras, the threat of an upcoming WWII kept the nation together after Atatürk’s death and provided a smooth transition for İnönü.

In Eternal Dawn, Gingeras presents a work that is well-written and distinguished from previous works published on this subject. Most scholars studying Atatürk fail to discuss other important figures of the era into account. Gingeras, on the other hand, provides a narrative-focused not only on Mustafa Kemal, but also on his supporters and opponents. In addition to this, his aim to deliver a study about the foundation of modern Turkey without the over-glorification that surrounds Atatürk and his role as the founding father of the country is well delivered. The number of memoirs Gingeras uses in his work also makes the book enjoyable to read. However, a criticism can be made on whether the author actually delivers a narrative that does not overlook the social groups of Anatolia. While some of the chapters, namely the fourth and fifth, focus particularly regarding these groups and their position in the making of modern Turkey, the majority of the book is from the perspective of the political elite. Eternal Dawn is an important work for anyone who is academically interested in modern Turkey and its foundations. 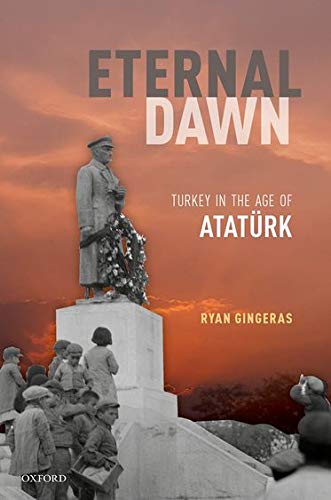