Citizenship, which is an operative arena of these new policies, is functional to counter the challenges posed by globalization and the incorporation of individuals and groups, including immigrants and minorities, into the society. For minority groups, not only legal rights and constitutional provisions, but also a wide range of public policies are required in the process of recognition and accommodation of distinctive identities and for the needs of ethnic, cultural and religious groups. The meaning of citizenship for immigrants, however, is closely related to “life strategies” like sequential plans and actions in the process of migration. There are several factors at play in determining the nature of life strategies, which include whether the receiving society is for permanent or temporary settlement, the duration of stay, kinship ties with countries of origin, documented or undocumented status of immigrants, and their qualifications and positions in the labor market.
The enterprises established by ethnic/racial minority and migrant groups with their growing numbers are illustrative of the new facets of the urbanization process in many city and metropolitan settings. Thus, they are at the center of the discussions on ‘globalization from below’ and ‘globalization from above’ and ethnic adaptation in local markets and informal economies. Ethnicity, Migration and Enterprise is an exploration of these discussions by the use of case studies on enterprises founded by minority and migrant groups.
The book is an in-depth investigation of ethnicity, migration and enterprise, which incorporates the mega-meta-theories of modernization and globalization, and their critiques by using the sample cases of Turkish immigrants in Germany, Chinese entrepreneurs in Europe and the USA, Cuban and Mexican Hispanic minority groups in the USA, and the Polish and Central and Eastern European immigrants in the UK. There are several ethnic groups—immigrant or minority, newcomer or old settler—under scrutiny in the study. The author presents a critical review of the academic and institutional research on migration and emergent enterprises among these different groups. Each chapter of the book is allocated to a single migrant/minority group under investigation, together with an introduction and a conclusion on the relevance and explanatory capacity of mega-meta theories to explain the phenomenon of rising ethnic migrant enterprises in local economies both in terms of growing numbers and potential contribution. The author, successfully in a considerably short book, makes an overview of the impact of ethnicity on the (re)distribution of wealth across borders of territorial, mental, ethnic and cultural in nature.
The study illustrates that far from the nationalistic and xenophobic jargons of “immigrants/minorities take our jobs!”, the actual situation evidenced by several academic and institutional research is the contrary: the enterprises of ethnic groups, minority or immigrant, create job opportunities and benefit the local economies. What’s more, the study shows that entrepreneurship has become a form of life strategy for among ethnic groups in globalized economies. Employment in informal economies via enterprises are side effects or, with a different formulation, the economics of multiculturalism. Another major contribution that the study makes to the literature on migration, minorities and citizenship is its focus from ‘below’. Examining the local circumstances, such as relating different minority and migrant groups to each other rather than exclusively focusing on their vulnerable relationship to the majority, is a substantial divergence from the conventional studies on migration and minorities.
The author brings further light on the relationship between class and ethnicity which are the two major sociological determinants of social mobility and their integration under the influence of international migration and minority issues. The citizenship debate encompasses the enterprises founded by migrant and minority groups. Yet, one cannot keep him/herself from thinking about the relationship between gender, ethnicity and class in the situations of international migration and minority. In other words, the functioning of the asset gap between different ethnic groups and economic classes, as shown by the author, might be indicative of a parallel gap between the genders of the same ethnicity. The discrepancies between women and men, both among the same ethnic group and between various ethnic groups, might contribute to our understanding of the relationship between ethnicity, migration and enterprise. In addition, the valuable data that the author provides on the experiences of ‘new immigrants’ and ‘old immigrants’ is useful. 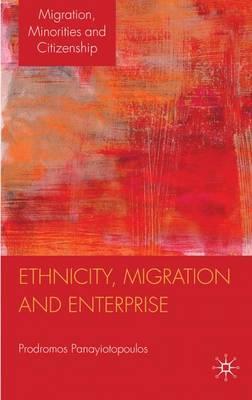