EU, Turkey, and Counter-Terrorism: Fighting the PKK and ISIS

The EU-Türkiye related literature mostly concentrates on the EU’s expansion, its conditionality on Türkiye’s democratization, and the strategic dimension of the relationship. Ilbiz and Kaunert, however, adopt a holistic approach to how the paradigm shifts in Turkish counter-terrorism policies that occurred during these periods to point out their basis in different domestic and EU-level factors and conclude with a remarkable articulation in contrast to the argument within the literature regarding the EU diffusing its norms for “altruistic” reasons. They argue that the EU is a rational actor only concerned with self-interest.

EU, Turkey, and Counter-Terrorism: Fighting the PKK and ISIS, Ethem Ilbiz and Christian Kaunert conceptualize the impact of the European Union (EU) on counterterrorism measures of candidate states. The book primarily analyzes and empirically investigates the EU’s influence on Türkiye’s counter-terrorism policy. This book consists of six introductory chapters, in which the EU’s impact on Turkish counter-terrorism policy is projected.  It is essential to note that this work is an elevated, meticulous book with a substantial number of sources and references. The authors comprise a range of scientific research methodologies, including findings from semi-structured interviews with senior officials, former politicians in Türkiye, and EU officials in Brussels. Through examining one of the most important policy areas of European integration, this book is a critical reading for academics and students of European politics and policy, international relations, terrorism and security, and regional studies.

Although security has always been the Achilles heel for the creation of a borderless and united Europe, it occupied the entire EU security agenda immediately after the attacks of September 11, 2001.1 It particularly took priority in an agenda previously dominated by “soft security” issues such as immigration, organized crime, drugs, and human trafficking. Because seeking a remedy for terrorism within the EU was not enough to eliminate terrorism, the EU incorporated counterterrorism measures with neighboring states. Liberal democratic norms such as democracy, human rights, ethnic minority rights, and the rule of law evolved into principal instruments. The EU promoted them to prevent the negative consequences of internal security problems of states. This played an essential aspect in the EU’s external dimension of counter-terrorism policy. However, Keohane argues that the EU has never clearly defined a counter-terrorism policy to be implemented in third countries.2

Because of its efforts to fight against ethnic, separatist, and jihadist terrorism, Türkiye has a special status regarding its candidacy to the EU. This book examines the concept of formal rule adoption by taking Türkiye as a case study. It argues that the EU has distributed its norms to Türkiye while transforming its democracy and is effective in influencing the changes in Türkiye’s counterterrorism policies. The argument goes on to conduct an analysis based on the domestic legislative changes for improving the civil rights of terror suspects and sympathizers, the ratification of international human and ethnic minority rights conventions, and institution-building initiatives to monitor and protect human rights in Türkiye. Further, it circumscribes the impact of the EU on Turkish counter-terrorism policy by building four periodical categories, which are discussed in detail in each chapter of the book. The first period was primarily defined by the attacks of the PKK in 1984, and the 1999 Helsinki European Council marks the end. During this time, Türkiye was incorporated as a candidate country. The unilateral ceasefire of the PKK in 1999 marked down the beginning of the second period, which ended with the 2004 Brussels European Council when the EU launched accession negotiations with Türkiye. The Türkiye-EU accession negotiations and the PKK attacks in 2004 determined the third period. During this time, ISIS attacks were also reinforced in Türkiye and the EU. In June 2015, the governing party, the Justice and Development Party (AK Party), lost its majority in Parliament, which was the ending incident of this period. The fourth period started with the June elections in 2015 and ended in 2020 with Türkiye’s cross-border operation in Northern Syria against PKKaffiliated armed groups and ISIS.

The authors explain the use of two norm diffusion mechanisms to conceptualize the impact of the EU: the “conditionality” and the “socialization” mechanisms. The conditionality mechanism is a top-down process where the EU determines political conditions in Türkiye and transforms its democracy alongside its counter-terrorism policies. If Türkiye fulfills them, it is awarded membership, while if it fails, the membership is withheld. The EU’s influence is the primary determinant of rule adoption during this process, which results in some shortcomings in the explanation of rule adoption in the absence of the explicit EU membership outlook, which has high political adoption costs. Thus, as an alternative mechanism, socialization was approached. Checkel3 defines the socialization mechanism as a process of adopting and internalizing the norms of a particular community detached from the material incentives provided and sanctions enforced. During social interactions between Türkiye and the EU, Turkish political actors adopt EU-promoted norms for their convenience in serving as tools for solving existing ethnic separatist terrorism problems rather than adopting them for the membership incentive. In opposition to the conditionality mechanism, this norm diffusion is a bottomup process where political actors are primary determinants of rule adoption rather than the EU.

Further, Ilbiz and Kaunert determined four internal and EU-level factors to analyze the efficiency of both norm diffusion patterns. They finally claim that Turkish political actors did not fulfill their duties, as they were required to, despite the high number of adopted norms. Politicians were reluctant and selective in adopting some ethnic minority conventions and human rights norms. The authors argue that this unwillingness was based on the issue of the PKK making demands for autonomy in Türkiye. This skepticism among Turkish politicians resulted in conditionality and socialization mechanism limitations. If a candidate state believes the implementation of EU-promoted norms could create an existential threat to the country’s territorial integrity, it is more likely not to implement them. Yet, as argued by Walker,4 the domestic opponents consider rule adoption as a weakening factor in the struggle against counter-terrorism while further criticizing the government for betrayal. Thus, it can be concluded that the conditionality and socialization mechanisms do not ensure that third countries will fulfill the EU requirements. Despite the absence of a clear membership prospect and high adoption costs, reform continuity succeeded in transforming counter-terrorism policies for a while in Türkiye.

To sum up, the book provides a critical theoretical and historical framework to understand the EU’s norm diffusion role in the counter-terror domain, with the subject only limited to Türkiye and its policies toward the PKK and ISIS. It could be extended to further terrorist organizations in Türkiye, which are also on the EU’s designated terrorist organization lists. Even though this book skips certain minor aspects and links between varying political processes, this analysis should be appreciated for its precision. This book has earned profound attention from political scientists and experts, mainly academics and students studying EU-Türkiye relations, terrorism, and counter-terrorism studies. Despite limitations, it delivers impartial analysis and generally contains complete research with a wide range of sources.

Broadly, the EU-Türkiye related literature mostly concentrates on the EU’s expansion, its conditionality on Türkiye’s democratization, and the strategic dimension of the relationship. Ilbiz and Kaunert, however, adopt a holistic approach to how the paradigm shifts in Turkish counter-terrorism policies that occurred during these periods to point out their basis in different domestic and EU-level factors and conclude with a remarkable articulation in contrast to the argument within the literature regarding the EU diffusing its norms for “altruistic” reasons. They argue that the EU is a rational actor only concerned with self-interest.

1. Douglas Pratt, “Islamophobia as Reactive Co-Radicalization,” Islam and Christian-Muslim Relations, Vol. 26, No. 2 (2015), pp. 205-218. Pratt states that there has been a public backlash to Islamist terrorism after 9/11 resulting in legal and social consequences for all Muslims, irrespective of their views or affiliations. 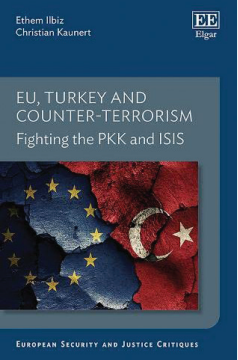