Europe at the Crossroads is useful for readers interested in populism and the transformations and challenges of the European political atmosphere. Despite the extensive amount of preexisting research on immigration, this edited work stands out through its combination of themes such as populism, extremism, neo-nationalism, and illiberalism. Its new and remarkable conceptualizations make political theory lively and accessible. By including both qualitative and quantitative research, Europe at the Crossroads makes a considerable contribution to social sciences literature

In European countries and their neighbors, nationalism with far-right tendencies is becoming more obscure. Europe at the Crossroads: Confronting Populist, Nationalist, and Global Challenges, edited by Pieter Bevelander and Ruth Wodak, includes investigations of populism, nationalism, and migration. Drawing upon the findings of the symposium, “Contesting the Populist Challenge: Beyond ‘Orbanism’ and ‘Trumpism,’” Europe at the Crossroads evaluates these actors, as well as other European political leaders with far-right tendencies, across several chapters, considering the different conditions, dynamics, and driving points affecting Europe today.

This book consists of eleven chapters. In the Introduction, the editors underline populism, nationalism, and global challenges, and emphasize anti-immigration and anti-Muslim sentiments as the main issues facing European societies today. Then, the contributing authors explore perceptions, tendencies, and confrontations of both far-right populists and liberals, along with their discourses and political agendas. They shed light on different cases in different countries to help readers understand Europe’s current problems. In nearly all of the chapters, a liberal perspective is adopted, and extremism and far-rightist actions are seen as a threat to the future of the continent.

In the first chapter, “On Radical Right Mainstream in Europe and the U.S.,” Matthew Feldman scrutinizes the historical trends that have posed a challenge to liberalism, specifically the near-right (illiberal democracy), and far-right, which have converged in Europe. Feldman offers a fascinating overview and looks at how the interwar-fascist period illuminates today’s far-right, interrogating the roots of and reasons behind Europe’s rightist political variations (p. 23).

In the second chapter, the EU’s value crisis is analyzed. Heather Grabbe and Stefan Lehne argue that authoritarian trends are more threatening than Brexit for the EU now, as many institutions are under attack from populist movements. Grabbe and Lehne show the examples of Hungary and Poland as cases of right-wing populism and underline the vital role of national political leaders in protecting EU values and promoting of rule of law (p. 49).

In “Analyzing the Micropolitics of the Populist Far-Right in the Post-Shame Era,” Ruth Wodak shows that the populist far-right has increased its effect by pointing out the increase of the seats of Eurosceptics in the European Parliament. With the intent of gaining more votes, radical right parties prefer to manipulate people by whipping up fear of immigration with protectionism and nativist nationalism. Wodak compares the different persuasive speeches of the European leaders, such as Hungarian Prime Minister Victor Orban’s illiberal speech, which focused on survival-centric discourse and ignored the unity of the EU, instead of promoting nationalist sentiments (p. 67).

Floris Biskamp underlines the necessity of questioning the political system and ruler-voter relations, providing conceptional investigations of populism in the chapter named “Six Theories and Six Strategies Against Right-Wing Populism” (p. 94). In “The Rise of Neo-Nativism,” Maureen Eger and Sarah Valdez seek to understand why radical right parties have increased in the recent period and stress the need to examine these parties and their ideologies, as well as the historical transformation of their thinking and action plans. The authors explain the Manifesto Project (2016) research, which covers the period between 1770 and 2015, as quantitative with selected criteria, helping readers understand the nationalistic behavior of Western European peoples and political parties year by year (p. 121). Anti-EU and anti-multicultural responses in radical right election manifestos in Western Europe are presented in useful figures (pp. 122-123).

In “The End of EU-topia and the Politics of Hate,” Salomi Boukala evaluates totalitarian behaviors in Greece. The Syriza-Independent Greeks coalition, political polarizations, the rivalry among political parties and their propaganda before the national election help illuminate the discursive side of the totalitarian response in Greek political style (p. 135). Boukala evaluates the New Democracy Party’s propaganda against Syriza, the economic debt crisis, and its reflections in political discourse in the Greek context (pp. 147-153).

Bertnard Forchtner posits that although there are many investigations on migration and far-right relations, there are not enough works on the discourses of the far-rightists regarding climate change. In Chapter 7, “Articulations of Climate Change by the Austrian Far Right,” Forchtner examines attitudes toward environmental protection in Austria in detail. According to his analysis, skepticism about climate change and the economic burdens imposed by environmental protocols and agreements are the main problematics and tools of discourse circulated by far- and radical-rightist groups (p. 159).

Today, extreme rightists impose restrictions on dress codes and attempt to establish national identities, as Markus Rheindorf and Sabine Lehner aptly delineate in “Gender and Body Politics of the Extreme Right in Austria.” The ways in which certain phrases, symbols, and cultural aspects function to create the ‘masculine Austrian national body’ in far-rightist and heteronormative discourses are examined in this section (p. 191).

Citizens of Poland came together under the roof of Islamophobia. Experienced great flows of migration, ethnic Polish nationalism leads to opposition against Muslims. In “Islamophobia Without Muslims as a Social and Political Phenomenon,” Balcer claims that the rule of far-right populism promotes the politics of fear, with the support of a far-right ideology (pp. 207-222).

In Chapter 10, Bentsen and Bevelander offer a fascinating analysis of the voting behavior of youth and their political engagements by means of a regression model with predictive power to indicate the future of political preferences and adult-youth relations in terms of rightist impressions in Poland (pp. 229-247). In the final chapter, relations among self-determination, populism, and international law requirements in Switzerland are evaluated by Gianni D’Amato, revealing how discussions taking place in Switzerland open a new window into the ongoing dilemma between communitarian and cosmopolitan views (p. 263).

Europe at the Crossroads contributes to the literature by explaining several key concepts, such as authoritarianism, neo-authoritarianism, and illiberalism, in the new light of current circumstances. However, evaluating populism unilaterally as the purview of the right-wing seems to be a mistake. The volume would have been strengthened by the inclusion of chapters addressing left-wing populism and its differentiated political agencies, as leftist populists play an important role in steering European politics within various countries. To its credit, Europe at the Crossroads is enriched with many tables and diagrams, social media posts, and photos from public activities. These media facilitate the understanding of the discourses of leaders and groups, as well as the classifications and tendencies of rightist and extremist parties, and organizations in Europe. Preexisting research and works on populism and nationalism may not cover such a broad swath of different phenomena. Here, however, we have a chance to analyze several topics with citations that have cross-referencing among texts.

Europe at the Crossroads is useful for readers interested in populism and the transformations and challenges of the European political atmosphere. Despite the extensive amount of preexisting research on immigration, this edited work stands out through its combination of themes such as populism, extremism, neo-nationalism, and illiberalism. Its new and remarkable conceptualizations make political theory lively and accessible. By including both qualitative and quantitative research, Europe at the Crossroads makes a considerable contribution to social sciences literature. 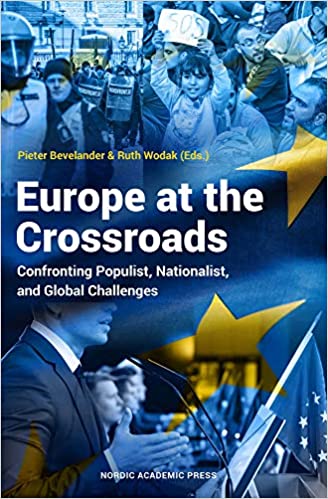 EU, Turkey, and Counter-Terrorism: Fighting the PKK and ISIS