Elisabetta Brighi’s book Foreign Policy, Domestic Politics and International Relations: The Case of Italy, basically aspires to explain the question of how foreign policy interacts with domestic politics and international relations. Brighi depicts a theoretical framework to be applied to the field of Foreign Policy Analysis (FPA), namely, the “strategic-relational” approach based on critical realism at a dialectical level. Accordingly, the main assumption is that foreign policy is “reconceptualized” as a “product of dialectic interplay between actor and context, and discourses” as clearly illustrated in an empirical analysis of Italian foreign policy. (p. 37)

Elisabetta Brighi’s book Foreign Policy, Domestic Politics and International Relations: The Case of Italy, basically aspires to explain the question of how foreign policy interacts with domestic politics and international relations. Brighi depicts a theoretical framework to be applied to the field of Foreign Policy Analysis (FPA), namely, the “strategic-relational” approach based on critical realism at a dialectical level. Accordingly, the main assumption is that foreign policy is “reconceptualized” as a “product of dialectic interplay between actor and context, and discourses” as clearly illustrated in an empirical analysis of Italian foreign policy. (p. 37)
The book consists of five chapters: “The introduction” starts with a brief definition of foreign policy and the unit of analysis of the research, and reveals the key reasons for the case selection. Brighi (p. 2) aptly identifies foreign policy as “an actor’s external relations, specifically, political relations,” (cited in Hill 2003; pp. 3-5) and the unit of analysis in the study as “foreign policy process.” Furthermore, in conjunction with an understanding of causality, according to Brighi’s viewpoint Italian foreign policy is intentionally concentrated and highly represents a “specific” and “heuristically fecund” case with its domestic and foreign policy making processes. (p. 5)

Drawing up the boundaries of foreign policy, the first chapter introduces the students of the foreign policy analysis to the “strategic-relational” model. Initially, the author provides a thorough literature review on the classical theoretical models previously developed by a wide array of scholars, including James Rosenau, Wolfram Hanrieder, Robert Putnam, and Walter Carslnaes. Brighi employs three approaches within the perspective of critical realism in looking at foreign policy, domestic policy, and international policy: monocausal, dualist, and dialectical views. She predominantly devises the dialectical one that constitutes the theoretical and empirical backgrounds of the research, mainly borrowing from the prominent works of Bob Jessop, Colin Hay, and David Marsch. In this respect, it is argued that foreign policy is “dialectic and sequential interplay between actor and context, and discourses.” It is strategic because states as actors are designed to achieve their pre-determined goals. Likewise it is also in relational form as “preferences are constituted through political processes at discursive levels.” (p. 37)

From a theoretical perspective, in the next four chapters, Brighi scrutinizes Italy’s foreign policy by dividing it into four periods: the liberal age (1901-1922); the fascist period “ventennio” (1922-1943); the “First Republic” (1943-1992); and the “Second Republic” (1992-2011). Each period is analyzed in connection to historical background, ideology, systems, political parties’ attitudes and discourses towards foreign affairs, and strategic-relational explanations. The second chapter comprising the period from the early years of the unification of Italy to the rise of fascism, and he examines the liberal, nationalist, and democratic positions towards the international environment during the First World War era. The third chapter explicitly discusses the role of Benito Mussolini and whether he acted autonomously in regard to his fascist policies in the domestic sphere. It also studies if Mussolini formed his foreign policy as a response to the international dynamics, mainly during the Second World War, or did he pursue a strategic foreign policy under international constraints. This chapter also addresses the “continuity vs. discontinuity in Italian foreign policy?” debate: The era is often deemed as either a continuation of the liberal age nourished by the spirit of nationalism and expansionism in Italy’s foreign policy that was also largely displayed in the interventions in Libya in 1911, or almost a “parenthesis that seems unfamiliar to traditional Italian foreign policy.” (pp. 80-81) The fourth chapter delves into the “First Republic” era encompassing the preferences and constraints of Italian foreign policy defined alongside the Cold War’s ideological struggles. The Christian Democratic Party’s positions principally shaped by the Atlantic and European influences are compared to those of the leftist parties (the Socialist Party and the Communist Party) that persistently moved along the spectrum between internationalism and “national way.” (p. 104) This chapter also points out the nature of the Italian governments in terms of the choices of the successive right wing/left wing party coalitions in foreign policy making processes that were necessarily exposed to the Cold War complexities. The fifth chapter best exemplifies the contemporary academic debate on Italian foreign policy pertaining to the post-Cold War era and the dissolution of the Italian domestic political system. In this chapter, Italy’s foreign policy is extensively assessed on the question of whether it oscillates between “external dynamism,” “pro-active foreign policy,” and the “internal ineffectiveness” or “domestic turmoil.” (also cited in IAI, 1993, pp. 5-30; p. 121)

This well-written book truly sheds light on a very basic question of what characteristics Italian foreign policy in general displays and whether there is continuity or change in Italian foreign policy. On the one hand, as a monocausal model would suggest, so far, either the domestic sphere (in terms of ideology, society and identity) or international politics (considering geography, power and capacity) has had substantial influence on the analyses of Italian foreign policy largely on case specific matters. On the other hand, consistent with a dualist outlook, Italy’s foreign policy has been mostly regarded as a combination of different variables of both domestic and international politics, and presented within a descriptive and historical framework. Thus, Brighi’s work offers a refreshing theoretical perspective generated as a synthesis of ideational and materialist interpretations, referring to Carlo Maria Santoro’s geopolitical approaches and Sergio Romano’s historical accounts. Analyzing Italian foreign policy in contextual, strategic, and discursive levels, Brighi meticulously assesses the theoretical arguments, including inside/outside (domestic/international) and structure/agency dichotomies. More importantly, the strategic-relational viewpoint simply argues that Italian foreign policy is made up of “the elements of free will and a part of necessity; the levels of impotence and omnipotence; the notions of determinism and autonomy.” (p. 157) Apart from that, the only theoretical level that needs to be further developed in the study is on the subject of the author’s “processual notion,” which covers a plurality of actors and processes (p. 3). In essence, while the study underlines that strategic actors are transformed through preferences, contexts and discourses when becoming strategic, the elucidation of how these three elements of dialectical accounts interact remains limited (see also p. 158). Therefore, the causal relationships among them can then become problematic in merging the materialist and ideational levels in theory making.

The author makes a valuable contribution to the fields of International Relations, Comparative Politics and FPA where the book can also be helpful for many other scholars to spur further innovative studies and for the application of strategic-relational model to different cases. It might be also interesting for the readers who are interested and engaged in Italian foreign policy in its relations with contemporary international political issues. 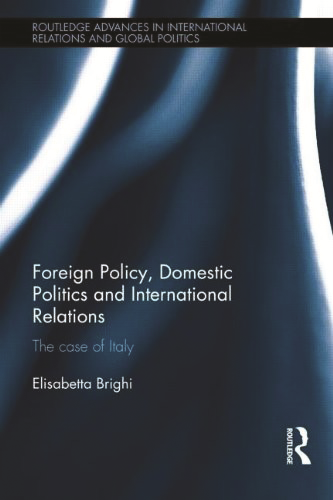