Jacobson can be certainly praised when she decided to treat Jerusalem as a mixed city acknowledging its religious significance but at the same time avoiding a single focus on religious and ethno-national types and dichotomies. The period scrutinized by Jacobson, 1912 to 1920, is a formative one and not just of transition. In order to capture this central moment in the modern history of the city, Jacobson coined and effectively used the concept of an “interimperial city”: a city that “changes hands” between two empires. In her study of the city in transition the author relied on the relational history approach, a wise choice. This approach has made it possible to compare and treat Jews and Arabs not as separate entities, but as parts of a dynamic process that sees both elements involved, undeniably a clear break from traditional Israeli and other historiographies. The book looks at the intercommunal and intracommunal levels of Jerusalem society and argues that the British reorganization of the local communities following religious lines marked the end of the fluid identities that had so far experienced in the city.

From Empire to Empire is divided into five chapters that are organized chronologically and all related to the idea of transition. The first chapter discusses the effects of the war upon the city and the local communities. While investigating welfare and relief work organized and distributed during the war, Jacobson explores the changing feelings of belonging to the Ottoman Empire and also examines the role of the United States in the region. Based on thorough research, the chapter shows in great details the crisis that hit the city and its inhabitants following the outbreak of the war, but at the same time Jacobson challenges the view that Arabs, Christian and Jews did not support the empire. Jacobson shows how in the first period following the beginning of the mobilization process signs of support for the empire and the war effort were shared by the various communities of the city; however, this support rapidly faded away. The chapter also offers an interesting overview of the local Armenian community as an example of a communal-led relief effort. Jacobson then effectively shows how American involvement and influence was far deeper than suggested by many historians; the author indeed breaks away from a popular and widely accepted belief, thereby re-opening this field for further investigation.

Chapter two focuses on the negotiation of identities in the transitional period under review. The question of identity and affiliations is discussed through the definition and analyses of public space. Jacobson argues that looking at the ways in which public space was contested during the war, the reader will understand how space, which is permeated by social relations (p. 60), was negotiated. Jacobson argues that indeed the Ottoman’s wartime policies alienated the sympathies of the Arabs, but at the same she shows that this argument is more complex. Through the analyses of a recently discovered diary by an Ottoman recruit and local Jerusalemite, Ihsan Tourjman, the author shows how Tourjman came to distance himself from the Ottoman nation in order to support the Arab national cause, but at the same time he still sympathized with the Ottoman soldiers as his brothers (p. 68). Jacobson successfully showed the impact of the end of the Ottoman Empire on the people’s sense of citizenship and collective identity.

Chapter three continues the analyses and discussion of identity negotiation by focusing on the young Sephardi intelligentsia of Jerusalem. Consistently maintaining the point that categories and identities were still fluid before the arrival of the British, Jacobson shows the exceptional role played by the Sephardi as loyal Ottomans and Zionist supporters, and that they did not see any contradiction between the two. The most interesting part of this chapter is the examination of the differences between Sephardi and Ashkenazi Jews in relation to the Arabs. Arabs, despite often having been treated with contempt, were recognized by the Sephardi, while the second ‘aliya Ashkenazi ignored and excluded them from any national project. Comparing Sephardi and Ashkenazi publications, Jacobson shows the presence of several forms of Zionism, inclusive and exclusive and this chapter seems to be an invitation to look at the dynamics that brought “exclusive Zionism” to triumph over “inclusive Zionism.”
Chapter four is an elegantly written historical account of how Jerusalem “changed hands” from the Ottomans to the British and is the materialization of the concept discussed earlier of Jerusalem as an interimperial city. The last chapter goes back to discuss identities and the rise of intercommunal tension. Jacobson shows how local alliances changed after the British took over in December 1917 as a result of the shift in the balance of power and interests in favour of the Zionists in Palestine. Following a short discussion on the emergence and role of Muslim-Christian associations, Jacobson shifts focus to the relatively unknown figure of Haim Margaliyot Kalvaryski who worked towards the creation of more positive Jewish-Arab relations (p. 160). In the author’s view, Kalvaryski was more than a Zionist agent who bribed Arabs; he represented the contradiction between the project embedded in the Balfour Declaration and the rights of Muslim and Christian communities in Palestine. The unanswered contradiction then translated into violence which marked the escalation of national tension. At this time, Jacobson argues, the shift was completed, the Ottoman era was over, and a new historical period for Palestine and its peoples started.

From Empire to Empire is an outstanding book and a significant contribution that asks new questions and does not fear to cross rigid boundaries set by previous historical works. All should welcome Jacobson’s methodological approach which suggests looking at transitions rather than clear cut changes and continuities. This book will certainly be welcomed by scholars of various fields of Middle Eastern history. 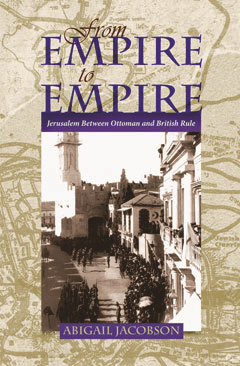