Büssow states that “the Hamidian period, together with the remaining years before the First World War, stands as the longest phase of peace and prosperity that Palestine has known throughout its modern history.” Although the title of the book is Hamidian Palestine, and Abdulhamid II was on the throne from 1876 to 1909, Büssow recounts the history of Palestine from 1872 to 1908. But Büssow’s book rightly starts with the change of Jerusalem’s administrative status and ends with the Young Turk Revolution. He intelligently organized the book in four parts (with eleven chapters in total), which each part dealing with politics at different levels of analysis: “Imperial Politics”, “Everyday Politics”, “Elite Politics”, and “Widening the Scope of Politics”.

In the first chapter, “The Making of a Province”, Büssow describes how Jerusalem was reorganized as an “independent district” (müstakil sancak) in 1872 in order to strengthen Ottoman control of this sensitive area. He reveals how the Tanzimat reforms were translated in the local context by showing that the expansion of state activity went hand in hand with the formalisation of traditional avenues of local participation.

After the top-down perspective of the preceding one, the following chapters on “Making Spaces” complement the perspective with a bottom-up approach. To gain a picture of how Palestinians “made” their own spaces in everyday life and used the land, Büssow examines local communities, life worlds and political arrangements in four regions, Jerusalem, Jafa, Gaza, and Hebron. He evaluates the change in the power balance between the town and the country, and the new education and career opportunities offered by the Tanzimat reforms and the urban economic boom. One of his conclusions here is that the Ottoman government did not make any effort to influence the ethnic makeup of cities. Büssow statistically shows how improvements in trading conditions and security created a boom in export-oriented agriculture and settlement throughout the coastal plains of the district.

The chapter on the local elites argues for a more nuanced framework, distinguishing between political and other elites, and taking non-Muslim actors into account. Forty elite households belonging to ten extended families were identified as controlling a disproportionate amount of local power. The Ottoman government’s main strategy in its interaction with the local oligarchy was co-option, achieved by state employment, the granting of privileges, and financial support. If co-option did not work, the second strategy was to balance different families against each other. If both of these two options failed and the government could not avoid conflict, the last option was exile or relocation. The chapter on the central elites is a useful account on Ottoman officials, their careers, families, and perceptions of Palestine and Palestinians. Here, Büssow touches on the colonialism issue, and points out that a “civilizing mission” is a better concept in explaining the feeling of superiority among the Ottoman officials.

The last part of the book contains chapters on the public sphere and the social space, where the issues of the modernization of the infrastructure, old and new forms of sociability, regional kinship ties, and the emergence of an Arab nationalist opposition are excellently handled.

There are minor points that detract slightly from Büssow’s contribution but do not harm the pleasure in reading this valuable book. For example, I cannot understand why Büssow relates the employment of a Shafii müfti alongside the Hanafi as part of the Sultan’s so-called pan-Islamic policy (p. 65). One major problem of studies about the Hamidian period is that they tend to look for a pan-Islamic factor behind every institution. When relying on his own sources, and not on the established discourse on pan-Islamism, Büssow is able to note, for example, that “the memoirs of Ottoman administrators do not reveal any sign of pious devotion to Jerusalem or Palestine as a Muslim ‘holy land’” (p. 430). In another instance, when speaking about the kaymakam, the head of the subdistrict administration, Büssow claims that “it was not entirely clear in how far he was subordinate to the governor” (p. 77), although we know much about the hierarchy of provincial administrators.

An evident weakness in many recent English writings on Ottoman history derives from a lack of decent knowledge and use of both old and modern Turkish sources. Although Büssow has exploited impressive archival material in German, English, Arabic, and Hebrew, I am not convinced that he used Ottoman sources properly. He transliterated “Musevi cem’iyeti” to “cema‘ati” for the Jewish community (p. 234); “a‘şar dairesi katibesinden” to “a‘şar dairesi ketebesinden” (p. 401); “mud‘i-i umumisi muavini” to “müdde‘i-i umumi muavini” for deputy prosecutor (402); and a sentence from the memoirs of Mehmet Tevfik Bey, “Böyle bir memlekette aşırı ekonomi ile yaşanacak olursa itibarı muhafaza etmek zor olmaz mı?”, is translated as “Will it not be difficult to maintain one’s standard of life while living in a land with a growing economy (aşırı ekonomi)?”

Beside these minor shortcomings, Büssow’s book skilfully presents the social history of late Ottoman Palestine in an eminently readable narrative. His nicely produced book contains useful charts and maps and very helpful appendices. Büssow is to be congratulated for producing a truly valuable piece of work using an enormous amount of sources, providing new perspectives on the history of a widely researched district of the late Ottoman Empire. 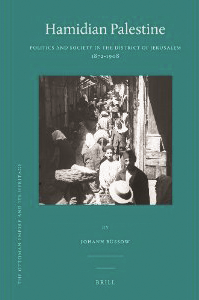