Over the course of the past 300 years, how does leadership compare from ‘East’ to ‘West’ in terms of both economic and military power on a global scale? What sort of processes did the West witness to transform into the capitalist center that has led Western Europe to ascend to a position of global dominance at the expense of the East?

Over the course of the past 300 years, how does leadership compare from ‘East’ to ‘West’ in terms of both economic and military power on a global scale? What sort of processes did the West witness to transform into the capitalist center that has led Western Europe to ascend to a position of global dominance at the expense of the East? And why has capitalism successfully predominated over and displaced other modes of production in the West? Shortly, how did the ‘West’ come to ‘rule’ under the wings of capitalism?” As can be understood from its title, these are the main questions that Alexander Anievas and Kereme Nişançıoğlu strive to answer in their book.

The authors undertake this project, despite the fact that they accept that these questions have been asked by many earlier scholars, and that there are many other studies, academic and otherwise, that have tried to explore this subject. However, they argue that earlier writers, whether intentionally or unintentionally, could not prevent themselves from falling into the trap of Eurocentrism which understands the emergence of capitalism as a ‘sui generis’ development unique to Europe. In other words, in the Eurocentric views, European development and modernity under the capitalist system is conceptualized as endogenous to the West and self-propelling. In accepting this as given, these studies set up an epistemological distinction between West and East that overlooks the multiple and interactive character of social development, including capitalism. The Eurocentric point of view has also misled some writers to see the European experience of modernity as a universal stage of development through which all societies must pass. In short, such studies conceptualize the East as an object in the making of capitalism, or as backward in comparison to the West along a single trajectory that moves inevitably toward developing capitalism.

To challenge and to change these sorts of Eurocentric views is the main motivation of this book. To put it differently, this book aims to bring forward a new approach in which the East is no longer cast as a passive bystander, and is instead engaged as a subject in the making of capitalism and history. In line with this purpose, Anivies and Nişançıoğlu seek to formalize the ‘uneven and combined development’ approach that provides a way of undermining unilineal development theories that present Europe as the prime mover. In place of this, they capture the multilinearity of developments to displace Eurocentric views of modernity and capitalism. As differently from Marxism which looks at history through the material exploitation of East by the West or a greater degree than post-colonial studies that mostly focus on decoding how does the West otherise or create hegemon over the East through discourse, the ‘uneven and combined’ view offers a way of understanding the historical developments with contributions of both the East and West. To be more precise, this theory aims to provide a unified analysis which considers structural determination as emanating from both within and outside of any region where social or other developments are taking place. In short, ‘uneven and combined’ theory claims that the characteristics of any human development should be conceptualized as ontologically plural and interactive, not singular and predetermined.

After presenting this theoretical point which is discussed in first two chapters of the book, in the later chapters, Anivies and Nişançıoğlu trace some historical cases in which the West and the East interacted, and in which the West was affected by others regarding the development of capitalism. For example, they show how the West benefitted from conjunctures in 13th century that the Mongols created in terms of making capitalism. Furthermore, the Mongol Empire also helped facilitate the transmission of key weapons and technologies from East to West that were crucial to Europe’s subsequent rise to global prominence. To clarify, while these developments did not automatically cause the emergence of capitalism in the West, they did create some preconditions that launched the West onto a path of capitalist development and, much later, global supremacy. The point needs to be emphasized that interactions of the West with others, and the consequences of particular events in Europe, such as the Black Death, had a different impact on the various European countries as they developed their capitalist economies. These different geopolitical and internal conditions pushed some European countries ahead of others in terms of capitalism.

After discussing the Mongols, the authors present Europe’s fear of the Ottoman Empire as a driving force in the making of capitalism. Through military pressure, the Ottomans undermined the existing centers of the feudal ruling classes. These were crucial steps in creating the foundations for capitalism. Moreover, the Ottoman threat was felt primarily by Southeastern Europe, which gave the countries in Northwestern Europe the geopolitical space to develop modern state-building practices. At the same time, the Ottoman territorial dominance of the Mediterranean and land routes to Asia served to push the Northwestern countries into a novel global sphere of activity –the Atlantic. After discussing the effects of the Mongols and Ottomans, Anivies and Nişançıoğlu examine the manifold impact of the New World Discoveries and their exploitation on emerging capitalism and later the global supremacy of the West. The conflict and struggles between Europeans and others in these areas, and the plunder of precious metals and slaves from these exploited areas, led to the emergence of the modern conception of territorial sovereignty and the development of the Eurocentric and modern institution of patriarchy.

Throughout the book, Anivies and Nişançı­oğlu seek to prove that there are varied contributions of the ‘other’ in European supremacy. But their theory lacks a rationale to identify from which point or time the influence of the other becomes crucial to analyzing any of the developments they cite. For example, one must wonder why they started to examine the effect of East in the making of capitalism in Europe from the time of the Mongols. Why they chose this time, and why they didn’t choose the time of the Persians, or even earlier, are some of the missing points in the book. Of course, taking the starting point further back in analyzing the emergence of capitalism and the importance of the ‘other’ to the West risks losing the thread of the argument in the mists of history. Nonetheless, some explication of the authors’ choices in this regard would strengthen their argument. In addition to this lapse, the authors also fail to draw a clear line determining which countries or areas should be included or excluded in analyzing any social development in a given area. For example, one might wonder why Africa did not have as much of a role as America or other regions on the development of the West. More importantly, how might it be possible for someone to limit the number of others that have influence on human development?

To conclude, in spite of these critiques, How the West Came to Rule offers a compelling analysis of developments in European history by considering the “international” vantage point, and is a good contribution to the research seeking to escape from the ontological singularity that lies at heart of Eurocentrism. So, despite some shortcomings, I can recommend this book to those who are interested in reading history from a more broad perspective, and who want to move beyond the literature that remains mired in Eurocentric perspectives. 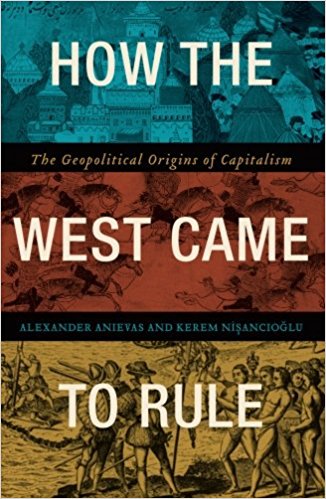