The UK Economic and Social Research Council’s research program on ‘One Europe or Several?’ that began in 2006 was a timely effort and contribution. With the collective effort of Roy Allison, Margot Light and Stephen White, the project produced its first work in 2006. In Putin’s Russia and the Enlarged Europe, the authors focused on the attitude of Russia toward the EU and NATO under Putin’s second presidential term. To address another part of this very broad research agenda, Stephen White and Valentina Feklyunina analyze attitudes towards Europe taken by three of the more important post-Soviet countries in Identities and Foreign Policies in Russia, Ukraine and Belarus. This review article evaluates the methodology and content of the latter book that came out of the project.

Identities and Foreign Policies in Russia, Ukraine and Belarus makes use of various methodological tools to analyze these countries’ relations with and sense of belonging to Europe. To comprehend the degree of belonging to Europe in these three countries, the authors use a social constructivist approach (p. 21). In line with this, the authors focus on identity formation and the dynamics of ‘othering’ Europe in each state. White and Feklyunina identify three basic discourses for each country: Russia/Ukraine/Belarus at Europe, distinct from Europe, and at Europe but qualitatively different from it (pp. 25-26), then investigate which of these discourses prevails in each case. The study examines the construction of identities taking benefit from discourse analysis, and using sources ranging from newspaper articles to official documents. In addition, the authors make extensive use of surveys and findings from focus group interviews.

The book is composed of eight chapters. Before examining the attitudes in each country toward Europe, the authors analyze the contested idea of Europe itself. In the first chapter, they demonstrate how Europe proved hard to define, spatially and ideally, for pioneers of the very idea of Europe as well as for the post-Soviet states. This chapter provides a necessary introduction regarding the context within which the authors discuss the constructed notion of Europe in post-Soviet countries in relation to foreign policy strategies (p. 23).

In the second chapter, the authors investigate the institutional background of relations between the Soviet Union and Europe. The topic of the third chapter is the development of the relations between fifteen independent countries and the EU following the dissolution of the USSR. These two chapters provide the necessary historical background to complement the arguments made in the following chapters.

In the fourth, fifth and sixth chapters, the authors analyze the way the EU is constructed in elite discourses in Russia, Ukraine and Belarus. These three chapters represent the core of this book, although the authors’ analyses in earlier and later chapters are also very rich. The categorization of the discourses the book employs is contestable. However, it simplifies the context and helps the authors gauge and demonstrate how close these three states are to Europe and to identify the dynamics that impact the discourse on the EU in each state.

The identity formation in all three countries is evaluated in chapter 7. This chapter, along with the previous three, represents the core of the book and demands attention, especially after the Ukrainian Crisis. In the concluding chapter, the authors discuss the qualitative differences between adherences to the three stances toward the EU and provide a general assessment of their findings.

It is important to note that the Ukrainian crisis, which coincided with the publication of this book, is both an advantage and a disadvantage for it. Aside from the obvious advantage of having the book ready to publish when the issue is relevant, the developments on the ground potentially shake the arguments and findings. The process that began with Ukranian president Yanukovych’s refusal to sign the Association Agreement has fundamentally impacted the politics of Ukraine, as well as how Ukrainians define their identity vis-à-vis the West. The crisis also inflicted great harm on relations between Russia and the West, and Belarus’ relations with both. Although the book is not able to capture the impact of the Ukrainian crisis, it provides insightful arguments to understand the underlying dynamics of the region as well as the future of relations between the West and the post-Soviet space.

Particularly from the third chapter forward, the authors demonstrate with several examples how Europe’s attitude toward the USSR and the post-Soviet countries has proven influential in setting the tone of the discourse of these countries toward Europe. The authors do not provide a comprehensive analysis on this, however, as the European discourse is outside of the scope of the book, which leaves the reader curious for more about this facet of the phenomenon.

White and Feklyunina point out the identity dimension of the relations between three post-Soviet countries and Europe, and demonstrate how spatial delimitations are formed discursively at the identity level. This book is a very significant contribution to the literature on politics in the post-Soviet region as well as the identity politics in the region. The ideological vacuum that emerged following the USSR and the contested discourses that attempt to fill this vacuum beg for explanations such as this provided in this book. 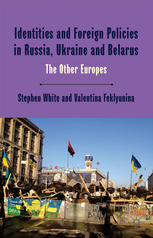 Russia-Europe Relations in Historical Perspective: Investigating the Role of Ukraine