The dominance of European scholars and a Euro-centric framework in social sciences, including history, has both stemmed from and perpetuated ignorance about the perspectives and feelings of colonized people in writing about the colonial period. Such narrations portray colonial rule as an inevitable and progressive stage in the economic, political and social development of Asian and African countries.

The dominance of European scholars and a Euro-centric framework in social sciences, including history, has both stemmed from and perpetuated ignorance about the perspectives and feelings of colonized people in writing about the colonial period. Such narrations portray colonial rule as an inevitable and progressive stage in the economic, political and social development of Asian and African countries. Even though there is plenty of literature about the looting and brutality of the colonial powers, most of this has gone unnoticed among the academic community. Inglorious Empire, which was published in India in 2016 under the title An Era of Darkness: The British Empire in India, a brilliant work by Shashi Tharoor, is distinguished among this literature in its manner of presentation and dazzling arguments. Its popularity as one of the Sunday Times top ten bestsellers shows the wide and enthusiastic acceptance of this book. Even though it does not make any new arguments or add value to the existing nationalist literature, Tharoor’s ‘ferocious and astonishing’ writing distinguishes it from others. The book is a continuation of the debate that occurred in in the Oxford Union on the extent to which ‘Britain owes reparations to her former colonies.’ However, the author shifts his focus in the book from reparations to colonial impacts.

Tharoor brilliantly depicts the impacts of British colonial rule on the Indian economy, polity and society. He continues throughout the book without diverting from the central question of ‘what the British did to India.’ The first chapter focuses on the economic aspects of colonialism and explains the different forms of looting that caused a weakening of the Indian economy from a 27 percent share in the world economy in 1700, under Aurangzeb, to 3 percent when Britain departed India in 1947. Tharoor dismisses arguments that the decline of India’s industries was due to its inability to compete with western machinery. According to Tharoor, the industrial revolution of Britain was built on the destruction of Indian industries. He calls the destruction of the textile industry, the “first great de-industrialization in the modern world” (p. 5). The second and third chapters focus mainly on the political impacts, along with a few social impacts, of British rule. The author dismisses the arguments of apologists who present democracy, the free press, the parliamentary system, the rule of law, and even the unity of India as a British contribution. Rather, he notes that India’s political institutions and press were controlled and constrained by British policies. Interestingly, Tharoor argues that a presidential system of government, not the British parliamentary model, is best suited to an independent India (p. 87). He differentiates the British colonial system from that of other colonial powers such as the French and Portuguese, and contends that Britain did not try to change or reform Indian society as other imperial powers did as part of their “white man’s burden” or crusade. However, the author ignores the social impacts of the cultural imperialism and assimilation policies of French and Portuguese in their colonies.

The fourth chapter examines the social impacts of Britain’s “divide and rule” policies. This “divide et impera” was epitomized by the colonial classification of Indian societies into different sections based on their caste, religious, linguistic and racial identities. The census and electoral policies of the government constructed division among different sects of people. The creation of Pakistan was an outcome of such colonial policies. The following chapter negates the argument that the British rule was ‘for’ the people, even though it was not ‘by’ the people. He argues that the famines that occurred in the nineteenth and twentieth centuries were a consequence of poor governance and Britain’s racial and discriminative policies. Tharoor uses the term “Brutish” to describe the brutality of the British. The author analyzes the various so-called contributions of Britain, such as the railway, education system, English language, and tea and cricket, and clearly sketches the colonial interests in introducing the railway and English education. India is still suffering from the textual harassment in an educational system by including colonial narration of Indian history that divided Indian society on communal lines. Even though the author acknowledges some contributions of the British, according to Tharoor the disastrous outcome of their rule far exceeds its positive impacts. Even though the author follows the nationalist historians’ narration of Indian history, unlike many other nationalist historians Tharoor points out the limitation of Gandhism and the non-violence method in different contexts such as the oppression of dictators and discrimination against Dalits. At the same time, he acknowledges the greatness of Gandhism and its influential role in India’s independence movement.

Historical narrations are not always, if there is any exception, objective descriptions of the past without having any value-biases. It can be said that this book also has some pre-determined intentions and biases. However, narrations such as Tharoor’s are needed to counter the arguments of imperialist historians that justify colonial rule. As the author himself indicates, the purpose of this book is not to tell the story of the past, but to present a counter-narration about the harmful impacts of colonial rule in India. So, rather than merely presenting a historical narrative of the colonial period, Tharoor critically examines the legacy of the British Raj.

The reference method that the book follows, without any numbers to identify endnotes, makes it difficult for readers to identify the sources and authenticity of its arguments. However, this book is an eye-opener and a valuable source of reference for students and others to understand India’s experience under British colonialism. If scholars and writers from other colonized countries also contribute to this debate, such counter-narrations will be able to challenge the dominant imperialist narration of western supremacy and to disclose the hypocrisy of the so-called liberal states in the application of liberal principles. 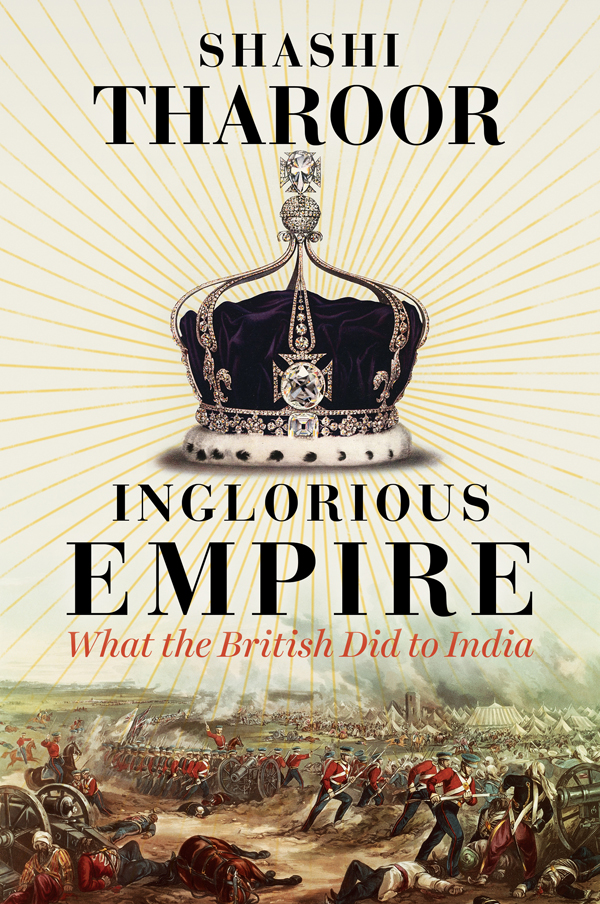