This book is a coherent and informative study of international migration with a specific focus on the reception of migrants in the West, in the words of the author “the wealthier” countries, particularly in the Unites States. Niklaus Steiner introduces two questions that constitute the focus of the study.

This book is a coherent and informative study of international migration with a specific focus on the reception of migrants in the West, in the words of the author “the wealthier” countries, particularly in the Unites States. Niklaus Steiner introduces two questions that constitute the focus of the study. First is regarding the selection process in the immigrants’ admission to the country, followed by a second concern over the criteria for citizenship of those admitted. The author uses the term “we” when stating “what criteria should we use to admit migrants who want to come to our country?” and explains that the goal of the book is to “to help citizens engage thoughtfully in discussions over admission and citizenship”. The uses of the terms like “we citizens of democracies” and “our country” distances the study from a scientific language and jargon is not used. Furthermore, it reflects a stance point of insiders (citizens) and outsiders (immigrants). The book is primarily targeting undergraduate students for their courses on international migration at North American universities; therefore, one might think of an author’s attempt for building up a sincere tone that would encourage learning. Yet, the same jargon/ language preference that puts the Western university students as the noun subject at the center might distance those readers who do not belong to this category of the “citizens of democracies” or the “wealthier countries”. Still, students from everywhere might understand the complexity of admission, reception and naturalization in international migration and learn about different factors involved in these processes.

The author limits the scope of the study to international migration by excluding the topics of internal migration and human trafficking. This distinction is justified by setting forth internal migration as a population movement within a given country that would not “be debated by others in another country”. With regards to human trafficking, the author identifies human trafficking as a criminal act and argues that the debates revolving around human trafficking are usually on preventing people from being moved across borders for exploitative purposes. Neither of the arguments or justifications is sufficient for explaining the limitation of the study’s scope. The author puts ‘debates’ as the norm of the study and if issues are debated then they are relevant for international migration and if they are not debated then they are not included in the book. What these debates are, who makes these debates, and the actors and the institutions involved are a total ambiguity. Furthermore, what about those voices of the silenced? Or those opinions or positions of people who do not talk? The book centers on a discursive categorical presumption of “citizens’ voices” which sounds like the voice of the holder of single citizenship status. It is evident that some countries and some citizens hold dual citizenship; the status of citizenship might not provide a satisfying criterion for getting involved in debates as there might be various other people affected by international migration such as the “denizens” who are not citizens but have settlement rights and participation rights in local elections; and internal movement, in some cases, might have relevance for people outside the borders such as some countries in the past. For example, some eastern European and Balkan countries applied settlement restrictions to mobile populations such as the Roma that would affect the Roma nomads moving across borders.

The author treats international migration as a movement across borders. Theoretically, such a definition is correct. Yet, it is also reflective of a political position that puts the state and its boundaries as the norm. The categorization of who passes the boundaries of a state is an international immigrant and who is not passing is not an international migrant is a simplistic approach. There might be complex cases that would alter the states’ presence. The literature on nationalism, the configuration of a nation state and the development of the modern state all point to the fact that boundaries of a state are fictive in the sense that it divides one state from another but it does not refer to a division between villages, communities or societies. There is circle migration, short-term seasonal migration or even undocumented irregular migration back and forth between two different places and regions. The existence of a legal border between these two places would not necessitate a reserved place to the states instead of the human collectivities. The cover picture of the book which has a straight line dividing the US and Mexico symbolizes not only the legal boundary but also the worlds apart between the countries. Yet, society wise, one might argue that in North America there are several societies which are integrated with one another, sometimes with overlapping minorities, ethnicities and/or cultures. One might also think of the continent as a habitus with a human population circulating over it.

The author, successfully in a considerably short book, makes an overview of the phenomenon of international migration with its various aspects. The admission criteria for different types of immigrants, to motives for migration and family reunification among economic migrants, the restrictions and discouragements on incoming immigration flows and the efforts for establishing asylum seeking and refugee protection systems are some topics that are discussed in the book. In the last two chapters the discussion is centered around the processes after reception which are merely citizenship and naturalization. The book is designed for university education most probably in the United States or Canada and can easily be used as course material at the undergraduate level. The use of a simplified and plain language and style of expression rightly targets university students. Prof. Steiner, who has been teaching international migration in American universities, seems to gather all his expertise in teaching that he attained over years in this textbook. The book is highly recommended for educational purposes. Yet, the book has certain aspects which are quiet troublesome in terms of a subject or opinion free language which is necessary for a neutral approach to citizenship and international migration matters. 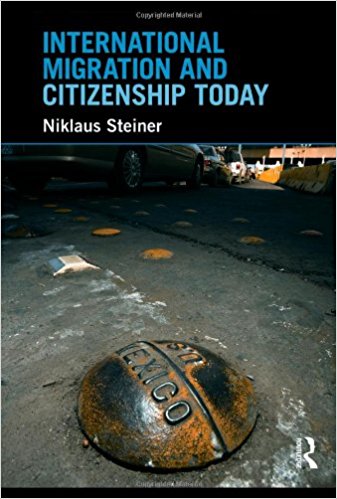 Cloud on the Horizon: African Migration, Transnationalism, and Social Osmosis