In International Relations Since 1945: East, West, North, South, Lundestad traverses a vast historical timeline of International Relations (IR) that encompasses the Cold War (1945-1993) and the post-Cold War period up to 2017. In the book, Lundestad demonstrates that trends in the U.S. and Russian foreign policy have remained constant, although the pursuit of goals is affected by changes in political personalities, ideological differences, and political and economic systems.

In International Relations Since 1945: East, West, North, South, Lundestad traverses a vast historical timeline of International Relations (IR) that encompasses the Cold War  (1945-1993) and the post-Cold War period up to 2017. In sixteen chapters, he criticizes the traditionalist-revisionist debate for “single-factor explanation” (p. x) while stressing the “mutual accountability of both the East and West” (p. 11) using a post-revisionist perspective. The author aims to give breath to East, West, North, and South relations by remedying the limitations of the already existent literature that he perceives as having shallow thematic analysis. His thesis focuses on U.S. and Soviet relations, not merely describing the history, but “reviewing the motivating forces, cause and effect” (p. xi) of the events and the recurring patterns in contemporary IR. Through subject analysis method, he frames IR in terms of the rise and fall of the East and West discourse and its impact on North and South politics. The author departs from the conventional historical method of interacting with Cold War and IR and demonstrates that the “past is bound to the East and West together.” Thus, the present IR owes its shape to the past (p. 14).

According to Lundestad, the rise and fall of great powers is a permanent feature of IR. He suggests that the “Cold War was motivated by the need to fill the power vacuum;” therefore, neither the East nor the West can be solely blamed for it (p. 12). The rivalry can be explained with the help of two elements. The first element is the structure of the international system of anarchy in which the absence of central authority leads to state security maximization. The second is the ideological battle between capitalism and communism. Lunderstad focuses on periods of East-West competition and cooperation from the 1900s industrial revolution until the post-1945 which led to the emergence of the U.S. and the Soviet Union as preponderant powers in 1993. These two factors explain U.S.-Russia conflicts and alliance competition raging on in the 21st century.

In the book, Lundestad demonstrates that trends in the U.S. and Russian foreign policy have remained constant, although the pursuit of goals is affected by changes in political personalities, ideological differences, and political and economic systems. American interests are global, and the U.S. pursues them by building defense capabilities, supranational bodies, and alliances (both military and economic) and providing aid. The Soviet Union, on the other hand, supported communism and nationalist colonial resistance movements. Today’s Russia similarly supports national autonomies of periphery states from the U.S. For the author, these endeavors account for the arms race from the year 1945 to 2016, which was largely determined by the geopolitics of the Cold War. The apparent fact is that “the quantitative question of armament was visible, but the qualitative question played a greater role” (p. 125). The West and East expected continued hostility, so they shifted to cheap nuclear weapons to attain Mutually Assured Destruction (MAD) while cutting the cost of conventional armies. Overall, the motivating factors were national security and economic sustenance. Accordingly, the Cold War became global, albeit with different intensity in different regions, because both sides pushed for global hegemony.

Lundestad explains why the Détente (1962-1975) resulted in a reduced struggle despite the continuity of hostilities between the U.S. and the Soviet Union. It marked a period of openness between the East and the West, leading to negotiations resulting in SALT-I, SALT-II (Strategic Arms Limitation Treaty), and NPT (Non-Proliferation Treaty). The Détente sought to avoid direct East-West confrontation and encourage acceptance of the status quo, reduce arms-related technological competition, lower military spending, and buy time for U.S. economic recovery. During this period, the Soviet Union was indirectly accepted as a superpower due to “respect for each other’s virtual regions” (p. 76). Despite this, “gray zones were in the third world and these drew superpowers to hostility” (p. 79).

From Chapter 9 to Chapter 13, the author explores IR and East-West tensions in relation to the North and the South. The U.S. used expansion by invitation (the Marshall plan 1947, the EU, the NATO). From Truman’s presidency in 1947 to the Trump presidency in 2016, American interest in Europe decreased while American national interest increased. On the other hand, Russia used effective control (East Germany, and North Vietnam, Crimea) and provided support to independence movements. However, after the fall of the Soviet Union, East-European states transitioned to democracy. Lundestad also demonstrates how and U.S.-Japan relations and the U.S.-Sino-Soviet triangle of 1972 helped China escaped dependency and to rise as a key actor in the new global world.

In Chapters 13 to 14, Lundestad demonstrates that while the East and West conflicted, decolonization became thematic. Lundestad shows that, this process was caused by a lack of willingness and capacity to maintain colonies and a weakening of the international positions of colonial powers. This explains post-colonial aid and trade relations which were used by the West 1950-1985 to deter former colonies from joining the Soviet Union. However, in the early 1990s, the failure of aid and the Washington consensus explains the current economic predicament of most of the third world. This brings the debate concerning the relevant development strategies to the fore.

In Chapter 15, the author claims that globalization before 1945 was later replaced with fragmentation. Citing regionalism as an example of the impracticality of global co-operation, he argues that in the Cold War, East-West blocs existed; later China and North Korea fragmented from the Soviet Union and took a different path, as did the Non-aligned Movement. Separatism is soaring, and there are four levels of explanation: first, the political-cultural level, where exposure to the different political system results in “long-distance nationalism” (p. 287); second, the ideological level, where one ideology infiltrates beyond the borders; third, technology exploited by small groups to push agendas; and fourth the economic level, where “small states can break out and form its own country without suffering economic consequences” (p. 288). Clearly, state size no longer determines the pace of political and ideological transformation.

An apparent weakness in the author’s style of presentation is the repetition of the same cases or information relevant to different themes for instance the Cuban Missile crisis. Another notable downside of the book is the final, 16th chapter, in which the author seems to explore the future without ending with a solid thesis, and instead of a series of generalizations. In this chapter, Lundestad uses prosaic statements such as the following: “The fact that something did not happen in the past does not mean that it will not be happening in the future.” (p. 296). Based on this assertion, he bundles together issues of “asymmetric warfare and the U.S. lack of cooperation in the environmental field” and calls for reform of the system (p. 302). However, he does not clearly explain how these will shape IR. Thus, the book ends on a weak note. After discussing the IR elaborately, the book could have ended with a bold and clear prediction, which is not the case.

Despite these limitations, International Relations Since 1945: East, West, North, South, does offer insight into the extent to which the present IR system owes its existence to the past. For students and practitioners of IR seeking to understand why certain events and state relations continue to replicate in the 21st century, this is an ideal book. 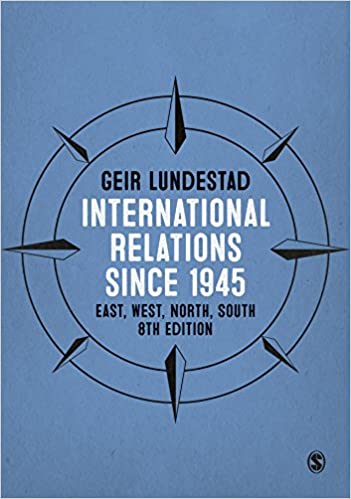