Iran-Turkey Relations, 1979-2011: Conceptualizing the Dynamics of Politics, Religion and Security in Middle-Power States

In the first chapter, the author describes the nature of Iranian-Turkish relations and the theory of middle-power states. It not only explains the foundation of the two countries’ relations but also offers an alternative approach to middle-power states’ relations in the Middle East. The holistic model the author proposes examines the theory of continuity and change in foreign policy making that has been experienced in the long tradition of Turkish-Iranian politics.

In the second chapter, Suleyman Elik stresses the importance of four diplomatic crises between Iran and Turkey since the beginning of the 20th century. Elik also argues that relations between Turkey and Iran have been tumultuous since their outset as there have been alternative regimes, either republican or monarchical, in the last century. Hence, this competitive relationship has materialized on the issues of Kurdish nationalism and ideological differences, either religious or secularist. The issues over the headscarf and Palestine caused two separate diplomatic crises in 1989 and 1997. However, Turkey and Iran have restored their relationship and ratified a new principle of non-interference in each other’s internal affairs in the 2000s.

In the third chapter, Elik explains the influence of terrorism by using the metaphor of a phantom in Iranian-Turkish relations. He identifies the role of terror in Iranian-Turkish relations as a counter-terror strategy or counter-revolutionary politics by Turkey. This strategy is a way of controlling and manipulating public opinion by using fear, propaganda, disinformation, psychological warfare, agents provocateurs, as well as “false flag” terrorist actions. The portrayal of religious terror also magnifies the dangers of suspicion in politics—analyzing assassinations related to the two countries is a good way to understand these dynamics. The analysis of political assassinations and of the Turkish Hezbollah mainly aims to answer the question of how the state manipulates or transforms religious issues into a type of political terror.

In the fourth chapter, the author focuses on Iranian-Turkish security relations in the framework of the Kurdish guerrilla warfare. Turkey’s clientele role of hosting American strategic weapons systems at a base in İncirlik, plus with Iran’s negative balancing role, has caused problems in Middle Eastern regional affairs. This chapter provides a detailed overview and analysis of the security mechanisms in Turkey and Iranian relations. There are two small systematic engagements between the two neighboring countries regarding the border and the High Security Commission. The Turkey, Iran, Syria tripartite commission is analyzed as a case study of these security patterns specifically in terms of regional security engagement on Kurdish nationalism.

In the fifth chapter, Elik deals with Iranian-Turkish security relations in Central Asia and the Caucasus. Elik describes the region as Turkish and Iranian frontline security zones which have been under siege from Russia since the 18th century. Russia’s final success as a winner in the “Great Game” at the end of World War One resulted in the total disappearance of the Turkic people of Central Asia from world politics until the end of the Cold War; however, in 1991, the dissolution of the Soviet Union put an end to the Russian hegemonic presence and introduced “New Great Game” actors in the regional political theatre, while at the same time the states there remained unstable, vulnerable and weak due to the continuity of Soviet Russia’s sphere of influence which led to religious and ethnic wars in the post-Soviet period in Central Asia and the Caucasus. The chapter argues that both Iran and Turkey have been trying to negate each other’s hegemonic ambitions. It is important to note that the impact of the region on Iranian-Turkish relations is presented in various dimensions, which are useful in describing the limits and aspirations of middle-power states in the present day.

In chapter six, Elik focuses on energy issues in the Caspian Sea-Black Sea neighborhood. During the Soviet period, despite having large oil and gas reserves, the energy potential of the Caspian basin was closed off from the global oil industry and thus remained relatively undeveloped. Hence, in the post-Soviet period large oil companies have been racing to invest billions of dollars to tap the unexploited hydrocarbon resources of the Caspian Sea basin. Elik analyzes pipeline politics from the Caspian Sea to international markets. There are four pipeline options for Caspian Sea oil and natural gas exports: north-northwest (Russia), west (Georgia and Turkey), east (from Kazakhstan and Turkmenistan to China), and south (Iran). The “Great Game” between the great powers and the regional powers has been played out in pipeline politics and their relative gain in the oil and natural gas consortium in Caspian Sea resource management. Elik says that the Caspian Sea incident between Turkey and Iran was the most serious example of Turkish coercive diplomacy towards Iran.
Chapter seven examines the marriages of trade, political, and security expediencies. Many in the West are increasingly concerned about the growing trade volume between two the countries, which increased tenfold between 2000 and 2008, from $1 billion to $10 billion annually, and now both countries aim to increase trade volume to $30 billion by 2015. Turkey’s struggle for energy and its national security concern has influenced Ankara’s actions with regard to Iran’s nuclear program. Turkey has supported Iran’s nuclear program despite International Atomic Energy Agency (IAEA) concerns over Iran’s nuclear activities and has opposed international sanctions, most recently at the United Nations. Iran seeks to use Turkey as a tool to help it attain its own regional economic ambitions. According to a natural gas agreement in 1996, Iran supplies Turkey through a pipeline carrying an average volume of 18-25 million cubic meters of gas per day. Elik identifies Iranian-Turkish relations as problematic in terms of the pathology and the economic relations between the two neighbors since the Islamic Revolution. The pathology of regime discourse still remains one of the impediments for private enterprise investment and cooperation in bilateral relations.
In the final chapter, the author tried to bring the entire discussion together by providing the results of a test of the middle-power state capacities of Turkey and Iran. This chapter bridges the findings in the form of discussion in the earlier chapters and the conceptual framework by testing its explanatory power when describing these middle-power states.

The case study of Iranian-Turkish relations offers dual purposes that satisfy both the international relations theory reader and the lay reader. There is also a strong theoretical underpinning to the text through the use of a middle-power states framework. Hence, international relations students and researchers will find much of interest here as the case study of Iranian-Turkish relations is presented on its own, but a theoretical framework is also carefully applied throughout the volume, shaping its analytical point. 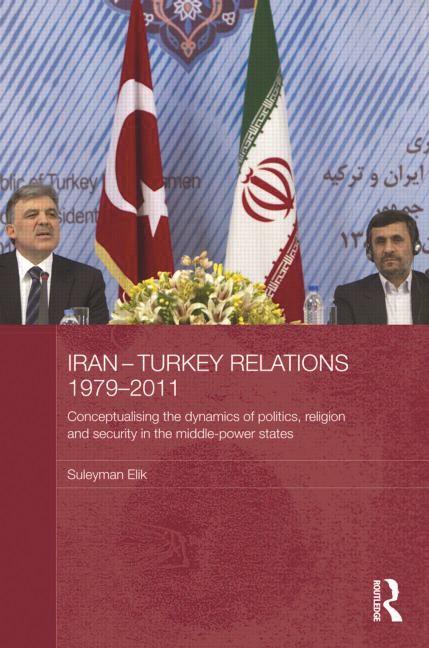 Blood, Beliefs and Ballots: The Management of Kurdish Nationalism in Turkey, 2007-2009