Following the initial idea that the fall of the Soviet Union, the end of a bipolar world, and the emerging of a post ideological era brought about new game rules for every actor in the international system, Hunter states repeatedly throughout the chapters that Iran has failed immensely to accommodate its foreign policy to the new international scenario. She explains that this is due to the immutable maintenance of the ideological principles of the first republican era and to the impossibility to disengage from the ideas of Iran’s leadership and its role as the final decision maker in every foreign policy issue, especially in Iran’s relations with the United States, Israel, and the nuclear dossier (pp.24-29; 240-241).

Following the first two chapters, which contextualize the new post-Soviet international system and explain the Iranian foreign policy decision making process, the book is divided in eight chapters dedicated to geographical regions. Each chapter is then subdivided chronologically by topic, covering briefly all the relevant (or less relevant) events of Iranian foreign policy, and evaluating its successes or failures towards each region. It is interesting to discover that Hunter recognizes that Iran did “partially succeed” In two regions. However, her main argument is that Iran’s Post-Soviet governments absolutely failed in the implementation of their domestic and foreign policies.

For instance, she states that the bad relations with the U.S. are the result of “its leader’s lack of understanding of the domestic political dynamics of U.S. foreign policy” and of the “inability to define its [Iranian] role in the post-Soviet world in a more positive manner…” (p.77). This inability, she continues, diminished Iran’s capability to negotiate with the U.S. government during Mohammad Khatami’s presidency, even after Barack Obama ac- ceded to the U.S. presidency.

Hunter sees Iran’s intransigent position towards Israel as one of the main reasons for its unsuccessful relations with the U.S. and Europe. Mainly, she affirms, it is because Iran does not understand “the commonality of interests and views between the U.S. and Europe on major global issues, including the Arab-Israeli question” (p.101).

The author insists that the same lack of understanding of the systemic changes after the fall of the Soviet Union prevented Iran’s success in its relations with Russia, due to its reticence to recognize that is has a powerful neighbour competing in the south. This is explained in one of the shortest chapters, which fails to reflect the importance that Russia historically held and still does for Iranian Foreign Policy.

Regarding the policies towards India, China, and other Asian countries, Hunter states that the Iranian strategy “has been only marginally successful in achieving its economic and political goals” (p.140). Although she evaluates it again as a general failure due to the reiterated “glaring lack of understanding of the dynamics of the international political system and the factors that drive state behaviour in the post ideological world” due to the “overestimation of Iran’s attractions; and the underestimation of the potential of its rivals, notably the Persian Gulf Arab States” (p.141).

In Iran’s policies towards Pakistan, Turkey, and Afghanistan, Hunter goes further in her negative evaluation, she states that it “has been one of the weakest aspects of its astonishingly inept foreign policy” (p.168). She justifies her statement by underlying the misguided con- cessionary policy towards Pakistan and Iran’s “remarkably naïve” Afghanistan policy following the U.S. invasion. The only positive aspect the author points out regarding Turkey-Iran relations is the result of the shifting Turkish foreign policy mainly after the AKP victory but rules out “any skillful Iranian diplomacy” (p.168).

Moreover, Hunter finds the same lack of understanding of the systemic reality in Iran’s policies towards Central Asia and the Caucasus, although she acknowledges Iran’s constructive policy in conflict resolution and active regional organization’s memberships.

In the longest chapter, Iran and the Arab World, Hunter describes all the issues related to the Iranian Foreign Policy towards all the Arab countries: Saudi Arabia-Iran relations and the Hajj issue, the Kuwait and Iraq wars, the Palestine issue and Hamas, Lebanon, Syria, and Hezbollah, as well as relations with Khadafy’s Libya and the Maghreb countries. Not- withstanding, and despite the detailed effort in mentioning all the bilateral and multilateral issues, the conclusion remains the same: the failure of the Iranian Foreign Policy due to the “lack of full appreciation of post-Soviet systemic changes and its inability to adjust to them,” stressing that this lack of understanding made them “simultaneously pursue revolutionary objectives” and “friendly state-to-state relations” with the Arab countries (p.224).

Finally, in Iran’s foreign policy towards Africa and Latin America, Hunter recognizes a “partial success” in Iranian foreign policy objectives during the Ahmadinejad presidency coinciding with the anti-imperialistic approach of Hugo Chavez. In sum, this is a very comprehensive book, which may be useful in acquiring a general historical overview of Iran’s foreign relations, but which fails to qualify as a reference for the specialized reader, who would expect a more in-depth analysis, given the author’s academic career. 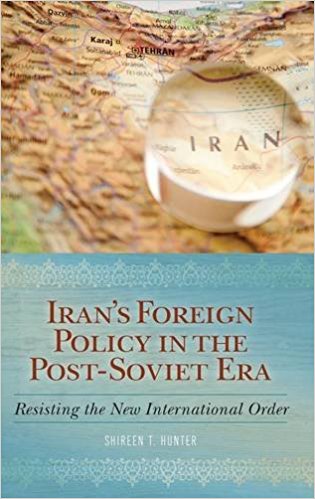