Islam and International Relations: Contributions to Theory and Practice

The discipline of International relations (IR) is deeply rooted in the history, intellectual traditions, and agency claims of the west, thus obscuring the contributions of the non-western world. There is a pressing need for a departure from IR’s historical complicity with the marginalization and silencing of alternative epistemologies, thereby opening the possibility of making its process of knowledge production truly global and democratic. IR scholars have conventionally turned a blind eye to analyzing religion as a variable in international politics.

The discipline of International relations (IR) is deeply rooted in the history, intellectual traditions, and agency claims of the west, thus obscuring the contributions of the non-western world. There is a pressing need for a departure from IR’s historical complicity with the marginalization and silencing of alternative epistemologies, thereby opening the possibility of making its process of knowledge production truly global and democratic. IR scholars have conventionally turned a blind eye to analyzing religion as a variable in international politics. Over the past two decades, the study of religion within International Relations has gained credence from its origins in sparse, scattered works, into a vibrant body of scholarship. An outcome of the Co-IRIS team (International Relations and Islamic Studies Research Cohort), which was established to advance comparative research between International Relations and Islamic Studies, this edited volume highlights Islamic contributions in expanding the explanatory heuristics of International Relations. Its contributors question the dominance of secular logic in International Relations and provide a nuanced, comprehensive appraisal of the role of Islam in global politics. They point out that the positivist approaches of IR, focusing on empirical and material corroborations, fail to acknowledge the epistemological and ontological limitations of their analyses and the need to move beyond theoretical confines to engage with the perplexing realities of international politics.

The book is divided into three sections; part one lays the foundational framework in analyzing the contributions of Islam to the study of International Relations. The chapters delve into questioning the hegemonic status accorded to Western IRT and the resurgence and revival of interest in classical sources of Islam with the expansion of globalization. In the first chapter, Alikhani delineates the fundamental epistemic and cognitive principles drawn from the Quran pertaining to the establishment of an ideal international order. The first set of principles involve relationship to other human beings and conduct towards them, including equality, a respectful attitude towards others, and the recognition of the plurality of religions as a reality. The second set comprises the ethical and rational principles governing ideal social systems, including the rejection of violence and the promotion of peaceful co-existence. The last set of principles draws on practical and behavioral fundamentals that facilitate bilateral and multilateral interaction among countries, including teachings that Muslim nations should follow vis-a vis other Muslim nations. These include aspects of encouraging dialogue, partaking in treaties and agreements, commitment to ideals of rights and justice, and limiting the use of force to preventive purposes alone. The next two chapters offer an elaborate analysis of the foreign policy making of two Muslim countries: Iran (Shia) and Turkey (Sunni), drawing on the principles of the Quran. In order to understand the politics of Islam it is imperative to understand its use of language – the words, metaphors and allusions that formulate the political discourse of this rich civilization. The lexicon used by mainstream IR to research the Muslim world is limited to the issue of Jihad (holy war) and the presumed tripartite division of the world into dar al-harb (abode of war), dar al-Islam (abode of Islam) and dar al-Sulh (abode of temporary peace), which is limiting in itself by drawing on the western binaries of a world oscillating between conditions of war (anarchy and state of nature as operative forces) and peace. This dichotomy hinders both appreciation for and accuracy in locating its sources. The chapter by Mauriello and Marandi examines the recreation/reconciliation response consisting of the integration of western elements in Islamic theory (acculturation) and the Islamization of western concepts (hybridization) due to interaction. They delve into Khomeini’s interpretation of state and society drawing on both Islamic and European components leading to the mustad’afun/mustakbirun(oppressed/oppressor) dyad which has been the paramount pillar in defining the foreign policy outlook of Hezbollah and Iran.

The second section of the book deals with concepts of justice, negotiation and diplomacy in Islamic thought. Faruk Yalvac’s chapter brings in Ibn Khaldun’s contribution to the discipline through his writings on cyclical transitions and change at the international level of analysis. Yalvac focuses on the comparison between the realist school of thought that alludes to structural a-historicity and the permanence of anarchy as a condition, and Khaldun’s analyses of change and progress that incorporates a historical understanding of social structures and the interactive multiplicity of different political units. Al-Dawoody’s chapter addresses the criticism levied against Islam as being a violent religion. He draws on Abu Zahra’s universal humanism paradigm by focusing on the abode of peace and treaty making (Dar al-Sulh or Dar al- ‘Ahd), human dignity, forbearance, cooperation, liberty, reciprocity, friendship and virtue that entail lessons that can be learnt by International Relations scholars. The chapter compares this approach to Huntington’s ‘clash of civilizations’ thesis and provides an analysis of these two approaches in dealing with contemporary strands of violent jihadi terrorism. Abdelkader’s chapter addresses the striking similarities between the concepts used in western and Islamic theory by comparing St. Thomas Aquinas’s notion of ‘common good’ with al-Shatibi’s ‘public welfare.’ She asserts that the dichotomy between reason and faith that emerged in the enlightenment period in Europe does not hold ground in non-European societies because of historical differences and the role religion plays in these societies. The church-state binary central to western liberal thought allows little room for variation and indigenous understanding of democracy and its functioning in various parts of the world. The last section provides an insightful analysis of governance in the Muslim world and the lessons that can be extrapolated to International Relations. It provides a detailed analysis of how nation-states in the Muslim world have reconfigured and adapted to the Westphalian state system. Drawing on the teachings of three distinct Islamic scholars, Sayyid Qutub, Yusuf al Qaradawi and Adullah Ahmed Badawi, the contributors in the last section seek to apply their writings and concepts to navigate the relationships between the Muslim and non-Muslim world.

Scholarly contribution to the non-western approaches to IR emphasize the selective amnesia toward the interactions between the west and the rest of the world that led to the development of IR theory. IR theory fails to take into cognizance the global distribution of its subjects of analysis along with their involvement in contributing to a heterogeneous and rich discipline. There is a need to move beyond the procrustean knowledge production ossified by the mainstream theories in IR to move towards rearticulating the subjectivities and diverse subjectivities that compose the ‘international.’ Given the increasing polarization between ‘Islam’ and ‘the West,’ this book offers IR a chance to engage in a constructive dialogue with Islamic traditions, in order to better understand global politics. It will make excellent reading for anyone interested in the interplay between politics and Islam and would be particularly useful for undergraduate and graduate courses on Islam, secularism, modernity and Middle Eastern politics. 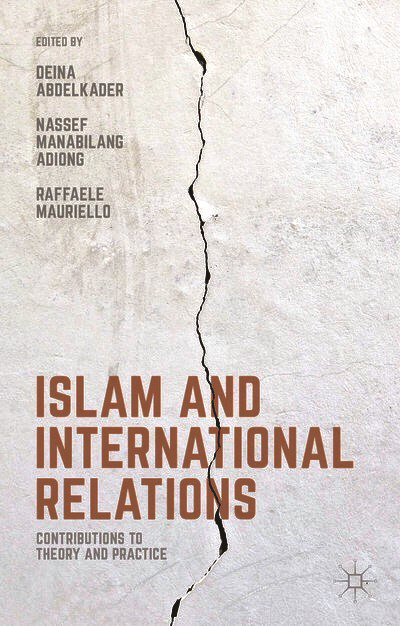