Islam and the Foundations of Political Power

Ali Abdel Razeks short treatise al-Islam wa-‘usul al-hukm, originally published in Egypt, in 1925, contributed to a debate that still remains at the heart of political discourse in the Islamic world. The subject, essentially, the doctrinal status of politics in Islam, was all the more pertinent given the abolishment of the caliphate by Kemal Atatürk the preceding year; and with it an institution that had remained in existence since death of the Prophet, thirteen centuries previous. Given a new and contentious attempt to resurrect the caliphate in the Middle East, the work is especially relevant again today.

Ali Abdel Razeks short treatise al-Islam wa-‘usul al-hukm, originally published in Egypt, in 1925, contributed to a debate that still remains at the heart of political discourse in the Islamic world. The subject, essentially, the doctrinal status of politics in Islam, was all the more pertinent given the abolishment of the caliphate by Kemal Atatürk the preceding year; and with it an institution that had remained in existence since death of the Prophet, thirteen centuries previous. Given a new and contentious attempt to resurrect the caliphate in the Middle East, the work is especially relevant again today.
Islam and the Foundations of Political Power comes as the second instalment of the “In Translation” series of Edinburgh University Press, “Modern Muslim Thinkers,” edited by Abdou Filali-Ansary and published in association with The Aga Khan University. The clarity and charm of the English indicates the stylistic success of the translators, Maryam Loutfi and Aziz Esmail, who worked with the aid of the editor. The precise influence of al-Islam is a matter of contention, but the work is undoubtedly amongst the most important of the early twentieth century for Islamic political thought, making this translation, the first into English, an important work.

The book represents a systematic and traditional scholarly work attacking the old and commonly held belief that the establishment and maintenance of the caliphate is part of a religious creed. Unfortunately for the author, the provocative and novel nature of the work did not go ignored, and very quickly unfavorable responses appeared from other scholars (‘ulama) on behalf of Sunni orthodoxy. Almost just as swiftly, Abdel Rezak was called before an al-Azhar disciplinary committee, had his title of ‘alim revoked, and was barred from working in education and the judiciary.

The introduction neatly describes the political context of Egypt at the time and the currents Abdel Razek was working against, making it clear that the government had a hand in his harsh treatment. There is also a short tribute from the author’s grandson, which delivers a personal account of the author’s religious sincerity and repudiates some of the cruder objections made towards him.

The book is made up of nine chapters divided evenly into three books. Each of the chapters is formed of numbered sections, with the titles to each section listed at the beginning. Had the editor chosen to have them respectively included at the head of each section, the reader would have been spared the trouble of having to turn back to start of the chapter to learn the name of the section he or she is reading. Alternately, merely numbering the section titles where they are listed would have been helpful. Contrary to the editor’s suggestion, comparison of Islam to Wittgenstein’s Tractatus seems far-fetched, but the numbered presentation leaves the reader with an appreciation for the steady build-up of Abdel Razek’s arguments.

The first book is historical in character. Chapter one presents an etymological study of the term ‘caliphate’ and an investigation into the authority the office has been ascribed over time, while chapter two evaluates the evidence and arguments made for and against the religious authority of the caliphate. The next chapter, “The Caliphate form the Social Point of View,” considers various political, social, and intellectual aspects of Islamic history in drawing attention to the problems associated with the institution and an age-long need for a rethinking of government in Islam. Book two has a more theoretical direction involving conceptual analyses of power and its embodiment in a state, though chapter four extends the historical considerations, focusing on government during time of the Prophet. Five and six involve accounts that dissect the political from the religious in connection to ‘prophethood’ and revelation respectively. The final book, “The Caliphate and the Government throughout History,” builds on these distinctions, while returning to developments during early Islam. Chapter seven examines pre-Islamic bonds within the nascent Muslim community; eight follows this into the development of “The Arab State,” while nine concludes the book by closing in on the initial history of the caliphate in relation to the companion Abu Bakr, and argues for its secular status by revealing the nature of the political dynamics behind its inception and development.

There are some evaluative points about the Abdel Razek’s work well worthy of consideration, especially to a new audience. Throughout, he approaches his subject from different angles without becoming repetitive; the strength of the arguments appearing accumulative as well as deductive. At the same time, the three books that make up the treatise appear increasingly controversial, though the insight of his observations displays consistency. The first book, where Abdel Razek attempts to undermine the belief that the caliphate has religious foundation, is perhaps the most difficult to assess, since his claim depends on the evidence (or lack of it) that can be found in the Quran and hadith. Nevertheless, the reasoning behind his thinking is clear. For example, at the end of chapter two, where (for the sake of argument) he provisionally admits the binding status of political obedience to an imam, he questions the status of such a relationship itself using an analogy to slavery: “… God talks to us about slavery. He exhorts us to set slaves free, to treat them well … However, this does not imply that slavery is a religious obligation, or that it is desirable.” (p. 41)

Until the latter part of the book, it is not clear whether Abdel Razek sees the problems he identifies with the caliphate as merely the result of historical circumstance (which, if so, would allow for the possibility of some future positive arrangement). The reader finds, however, that he sees the problems as virtually inherent to the institution, and calls Muslims to govern themselves “on the basis of past constructions of human reason, of systems whose sturdiness has stood the test of time, which the experience of nations has shown to be effective.” (p. 118) Whether or not the author envisages any religious direction at all in the political arrangements he suggests for Muslims is not clear.

Ultimately, though, Abdel Razek presents a set of interrelated claims that strictly separate politics and religion: the Prophet neither established what would today be recognized as a proper state nor was it his mission to do so; the caliphate is not obligatory for Islam but rather an innovation; and it is intrinsically a poor form of government which Muslims would do well to give up. Unfortunately, the last claim leads him to an unattractive reading of the Caliphate immediately after the passing of the Prophet. This includes the reign of Abu Bakr in particular, and the wars of apostasy (ch. 9), which have key doctrinal significance for Sunni Islam.

More broadly, however, the work can be seen as a challenge to narrow minded (and culturally or historically biased) opinions about the arrangements of government legitimately available in Islam – acting as a continuing invitation to reconsider traditional concepts in today’s world – and attacks abuses of the authority of religion for political purposes. It also indirectly treats a wider issue regarding the main fault line in Islam. Just as the caliphate has religious significance for the Sunnis, on the other side, the imamate has religious significance for the Shia. Abdel Razek, of course, opposes both views, but in a way that suggests theoretical reconciliation. 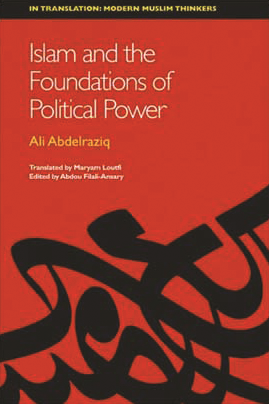