This work’s title Islamic Literature in Contemporary Turkey From Epic to Novel might give some readers the impression that this book is about different genres of Islamic literature available in Turkey today. It is not. Readers familiar with Bakhtin’s essay, “The Epic and the Novel: Towards a Methodology for the Study of the Novel” will be better prepared for what is in this book.

This work’s title Islamic Literature in Contemporary Turkey From Epic to Novel might give some readers the impression that this book is about different genres of Islamic literature available in Turkey today. It is not. Readers familiar with Bakhtin’s essay, “The Epic and the Novel: Towards a Methodology for the Study of the Novel” will be better prepared for what is in this book. Çayır investigates Islamism and the changing compositions of Islamic identities in Turkey through a study of the Islamic literary fictions of the 1980s and 1990s. He explores the political and sociological processes of identity construction in the context of Turkey in that period. Instead of opting for breadth, the author examines Islamic novels in depth by focusing on two ‘salvation novels’ of the 1980s, Müslüman Kadının Adı Var and Boşluk, and two ‘selfreflexive novels’ of the 1990s, Halkaların Ezgisi and Yağmurdan Sonra, which have canonical status in Muslim circles and because they are the prototypes for the narrative structure for each time period.

There is an explicit gender perspective to the author’s analysis. Each of the two sets includes male and female novelists. Çayır’s careful study argues that the salvation novel as a genre represents a renewed interrogation of the secular narratives of modernization through a literary medium (p.88) The author effectively illustrates that the selfreflexive and self-exposing novels of the 1990s deconstruct the narratives of salvation novels and of collective Islamism of the 1980s. In the salvation novels of the 1980s, Islam is presented as the source of a value system. In these novels, “strong and stable” Muslim characters engage in a competitive dialogue with “degenerate” westernized characters. The westernized characters discover solution to their problems in Islam. (p.34) Male characters only need announce that “they believe” in order to transform into Muslim subjects. Female characters must also don the headscarf in order to become Muslim subjects. (p.50) In Halkaların Ezgisi, “A self-exposing” novel published in 1997, a woman writer who adopts the headscarf in the 1980s unveils herself a few years later. (p.116) The headscarf that she is required to wear by her Islamist circles becomes constraining when she is in public. She is no longer seen as an individual. Islamists and secularists have assumptions about how women wearing headscarves should behave in public and feel free to tell her so. She finds it unjust that men can be Islamists without being a symbol.

This work is a well-researched, articulate and precise work that adds yet another layer to a sophisticated academic discourse on Turkish identity. Islamic Literature in Contemporary Turkey From Epic to Novel demonstrates that Islamic identity is a “work in progress, a project,” neither monolithic, nor static.

In addition to an introduction and a conclusion, the book is divided into four chapters. Chapter one “The Turkish Literary Field: A Space Of Struggle Over Islam, Secularism, Modernity” situates Islamic literature within the field of Turkish literature while relating the emerging salvation novels to the context of the 1980s. It addresses the issue of literary translation and other pertinent questions. The author is refreshingly precise. He defines his terms so there is never any ambiguity about his interpretation of terms or “isms.” Chapter two, “Salvation Novels of the 1980s: The Islamic Ideal for a Total Islamization of Society” examines the two pertinent salvation novels narrative structure, focus on nature of the Islamic messages, on the representation of Islamic and secular identities, and the gender dimension of the novels. Çayır argues that these novels are indicative of a collective and epic Islamism of the 1980s, the dominant strand of Islamist politics. Chapter three, “The Concrete Performance of Salvation Novels on the Path to Collective and Epic Islamism,” provides a more general understanding of salvation novels and relates them to non-literary Islamic writings of the 1980s. This chapter reveals how these novels provided Islamists with a repertoire of action and emotion that paved the way for the emergence of assertive and collective Islamic subjectivities. Chapter four examines the more self-reflexive and self-doubting narratives of the 1990s. Çayır reads Halkaların Ezgisi and Yağmurdan Sonra in the socio-political context of 1990s. He links the rise of the Islamic middle classes, the incorporation of Islamic actors into commercial and cultural life, to the emergence of self-critical Islamic voices over the excesses of Islamist politics. Inner conflicts of Islamic characters in the novels of the 1990s challenge the collective Islamic definitions of the previous decade. Islamic Literature in Contemporary Turkey From Epic to Novel through its study of changing narratives brings to light two coexisting and conflicting strands of Islamism. Çayır’s work makes use of literature for the purposes of sociology and political science. The epic plays a role in that the salvation narratives of the 1980s were characterized by their “epic discourse in a Bakhtinian sense.” (p.156) I found it ironic that a work about a literature that repeatedly asks its readers not to “imitate Europeans,” (p.11) a work where again the literature examined sees itself as a mode of self-defense against western values and norms, (p.22) is replete with literary theory that originates in the West. Theoretical frames can be very useful tools in analyzing materials but they should not become the dominant element. The texts themselves and Çayır’s analysis of them in the Turkish context is fascinating. The intertextual confrontation between the novels of the 1980s and 1990s is both remarkable and revealing. This important work should be of interest to scholars of Turkish Studies, Middle Eastern Studies, Sociology but also to anyone interested in Islamist movements and the processes of identity construction. 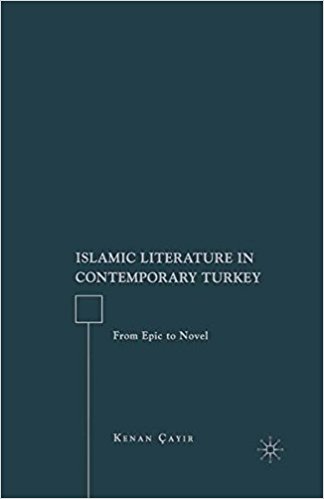