Late Ottoman intellectual history, especially the nineteenth century, was seen by Bernard Lewis (in his The Emergence of Modern Turkey, 1961) and Niyazi Berkes (in his Aristotelian teleological work The Development of Secularism in Modern Turkey, 1964) as a “natural evolution” towards a “new” Republican Turkey leading up to the modernization/secularization of the country. Accordingly, political scientists and Orientalists in Europe and North America have commonly presented a history of Islamism outside of Ottoman experience, starting with the founder of the Muslim Brotherhood Hasan al-Banna of Egypt (d. 1949) in the early twentieth century, and respectively, Islamic modernism beginning in Egypt with Muhammad Abduh (d. 1905) during the nineteenth century.

Late Ottoman intellectual history, especially the nineteenth century, was seen by Bernard Lewis (in his The Emergence of Modern Turkey, 1961) and Niyazi Berkes (in his Aristotelian teleological work The Development of Secularism in Modern Turkey, 1964) as a “natural evolution” towards a “new” Republican Turkey leading up to the modernization/secularization of the country. Accordingly, political scientists and Orientalists in Europe and North America have commonly presented a history of Islamism outside of Ottoman experience, starting with the founder of the Muslim Brotherhood Hasan al-Banna of Egypt (d. 1949) in the early twentieth century, and respectively, Islamic modernism beginning in Egypt with Muhammad Abduh (d. 1905) during the nineteenth century. European and North American academics, including Brian Silverstein, Amit Bein, and Susan Gunasti among others, have only very recently turned their attention to the late Ottoman ulema and Islamist intellectuals, mainly in the wake of AK Party’s success in the post-Kemalist/secular Turkey. However, up until now, there was no reliable comprehensive work on late nineteenth century Ottoman/Turkish Islamist thought in English. It is in this context that Ahmet Şeyhun’s work Islamist Thinkers in the Late Ottoman Empire and Early Turkish Republic proves to be a significant contribution to a vital but long-neglected chapter in the history of Islamism.

Şeyhun sees these Young Ottoman thinkers, unlike their revivalist Salafi or hardcore Westernist precursors (e.g., Wahhabi movement and Abdullah Cevdet), as complementing European, especially French, socio-political humanist ideals within the context of their own indigenous Islamic discourse. The most important of these nineteenth century Young Ottoman thinkers, the author maintains, were Namık Kemal (1840-1888), Ziya Paşa (1825-1880), and Ali Suavi (1839-1878). Namık Kemal, who became a large influence for the Islamists of the Second Constitutional Period (meşrutiyet) between 1908 and 1920, was an advocate of liberal political principles. Şeyhun presents in detail Kemal’s argument which maintains that the Ottoman Empire could only recover from its decline through a constitutional regime, as the Tanzimat reforms were not sufficient for the constitutional state (hükûmet-i meşrûta). Kemal’s explanation of the hükûmet-i meşrûta through two famous Qur’anic verses (3:153 and 42:38) was to legitimize the constitutional government in the nineteenth century: wa shawirhum fi’l-amr (and seek their counsel in all affairs) and wa amruhum shura baynahum (whose affairs are settled by mutual consultation). Şeyhun claims that Islamic modernism for Kemal, therefore, was a “sacred idea resulting from combination of various noble concepts and principles such as the people, liberty, brotherhood, sovereignty, respect for one’s ancestors, love of family and childhood memories” (p. 6). Although Kemal had strong ties to his Islamic heritage and Ottoman/Turkish national identity, he was not exclusive of non-Muslims, promoting ethnic plurality within the Ottoman Empire. Kemal did not understand Islam to be the only glue which held together the Ottoman nation and was arguably the first Muslim in modern Islamic history to advocate a parliamentary regime in 1860s. For Şeyhun, this is where Islamic modernism and Islamism start their histories by responding to Kemal’s provocative question: Should Islam and Qur’an be the only or the most dominant glue underpinning the Ottoman state?

To answer this question, Şeyhun examines Ziya Paşa and Ali Suavi’s responses. The more conservative Ziya Paşa took caution in his approach to the concept of liberty. While he advocated a constitutional government, Ziya Paşa defended the imperial prerogatives of the Sultan. He understood the decline of the Empire to be a result of limiting the sultan’s power over state affairs. Ali Suavi, who was even more conventional than Ziya Paşa, was an advocate of the sovereignty of God. For Suavi, the popular sovereignty that Kemal promoted was a ridiculous idea, arguing that no civilization could possibly replace the sovereignty of God with the persona of the Sultan. These thinkers found residence with the Sultan Abdülhamid II who overthrew Sultan Abdülaziz in 1876 to establish a constitutional regime. The Sultan’s controversial pan-Islamic policy, which aimed to unify Ottoman-Muslims and to restore stability to the Empire, was never fully realized. The re-establishment of the first Constitution of 1876 in 1908 resulted in further political conflicts within Ottoman society. Protests rose mainly among Islamist (pro-Hamidian, anti-constitutionalist groups) which concerned the anti-Hamidian movement, the Young Turks, causing the government to arrest the organizers of the demonstrations.

Şeyhun sees the emergence of political Islamism as a response to the collapse of the so-called “Hamidian autocracy” and the declaration of the constitution on July 23, 1908. The book places the Ottoman Islamist intellectuals of the late nineteenth century into two competing groups; first, conservative-traditionalists; and second, modernists. These groups consolidated during this time and spread their viewpoints through different strains of journals, newspapers and pamphlets. The Islamist thinkers of the Second Constitutional Period believed that their rulers were very wrong in their belief that the adoption of the European laws and institutions would stop the decline of the Ottoman Empire and ensure its welfare and progress. Because of the social and cultural distances of these institutions, Şeyhun argues, Islamists believed that the adoption of Western standards would not benefit but instead harm the Ottoman state. These ideas were first voiced by Young Ottoman thinkers Namık Kemal, Ziya Paşa and Ali Suavi in their critique of the Tanzimat reforms. Like their predecessors, the Islamists of the second Constitutional Period sought to return to the pristine principles of Islam to cure the ills the Ottoman Empire faced in the twentieth century. For them, Islam was a religion that contained within it the guiding principles for an ideal society; they understood that the precepts of the Qur’an were rational and it had to be interpreted according to the demands of modernity. Islam was a revolutionary religion in that it advocated a society where everyone was equal under the law and fought against the economic class struggle.

The ideas these Ottoman intellectuals yielded constituted the blueprint for the social/religious movements, parties and Islamist figures that have remained important political players in the post-colonial Muslim societies. The writings of these Islamist intellectuals, which are covered in detail throughout the chapters of Şeyhun’s book, are not only essential for students studying Turkey but also for scholars studying the origins of political Islam in modern Middle East. 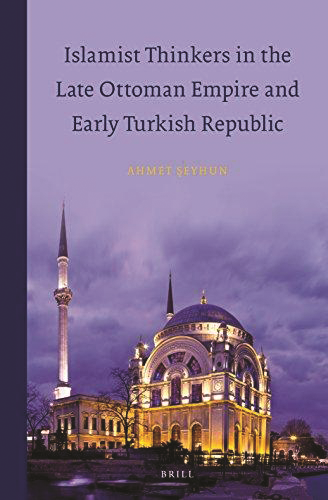