Labour Migration from Turkey to Western Europe is a detailed multidisciplinary study of the labor migration from Turkey to the West during the official recruitment period between 1960 and 1974. The book endeavors to that make use of all available sources in four languages and draws on both historiography and social science research in the field.

Labour Migration from Turkey to Western Europe is a detailed multidisciplinary study of the labor migration from Turkey to the West during the official recruitment period between 1960 and 1974. The book endeavors to that make use of all available sources in four languages and draws on both historiography and social science research in the field. The 221-page book consists of six chapters. Following the introduction, it first looks at the causes of migration pressure in chapter two. Chapters three and four subsequently analyze the push and pull processes. Chapter three is titled “The Migration Process: Aspects Related to the Sending Country” and the chapter four is “The Migration Process: Aspects Related to the Receiving Country”. Before the conclusion, the book devotes 35 pages to analyzing the migrants and their characteristics in chapter five. It has also an extensive bibliography listing primary as well as secondary sources in four languages, which will be useful for other researchers in the field.

The book is an attempt to tackle misperceptions and erroneous assessments of the studies, especially of the 1960s and 1970s, that stemmed from either a lack of available hard evidence or a narrowness of methodology. Thus, this book critically evaluates assessments of the previous research. How the Turkish labor migration came unto the demand side’s agenda and how it developed are evaluated by taking into the account major variables in the process. Country-tocountry variations in the sectors where foreign workers were employed are also given due attention.

In chapter two, the book addresses causes of migration pressure—the push factors—in the light of a critical discussion of the previous studies on the subject. The chapter details economic and industrial growth rates, wages, and distribution of income during the migration period. By evaluating the characteristics of the labor market, the forms of unemployment, registered job seekers, unfilled job vacancies, and real wages, the chapter argues that the unemployment argument is only helpful to a limited extent. The chapter looks also at the socio-economic transformations taking place in Turkey when analyzing the push factors. In conclusion, the chapter argues that four additional factors should be taken into account when analyzing the push process.

Chapter three addresses the role of the sending state and tries to explain why the state’s role was important in the process; on which grounds sending workers was justified; how the nature of the migration was defined; and the initial system of sending workers and amendments made in the system. The chapter then analyses the attitudes of the Turkish people towards migration and characteristics of the labor outflow. The chapter finally conceptualizes the role played by social networks.

How and under what circumstances Turkish labor migration to the West was initiated and developed is the dealt with in chapter four. This chapter looks at the state of international migration in the post-war years; the structure of registered unemployed and unfilled vacancies in each of the receiving countries; their migrant employment policies; and the position of Southern European countries on sending laborers abroad. The chapter also looks at the sectors that Turks were employed in and shows that foreign policy or historical reasons did not play direct roles in Germany’s preference for Turkish workers.

Chapter five analyses the migrants. It first of all critically evaluates the Turkish official figures and statistics and then details the geographical origins of the migrants. The chapter also looks at employment situation of migrants before going abroad. The chapter finally evaluates the levels of qualifications of the migrants before migrating to the West. In this context, the chapter highlights the concept of “being skilled” by providing the proportional number of skilled workers who went abroad.

The book shows that the claim that the main justification for sending laborers abroad was to alleviate unemployment in Turkey is wrong. The state’s justification was based on the modernization and industrialization of the country, the rationale being that unskilled and rural people would gain skills that were needed in Turkey. That is why Turkish officials tried to institute measures to prevent skilled workers from migrating. In addition, migrants would contribute to economy by sending their hard currency to Turkey. The book challenges the misperception of Turkish migrants as an “unskilled and rural populace who mainly originated from central and eastern Anatolia” and shows that that was an imagined construction as far as the majority of migrants were concerned.

Turkey is a candidate country to the European Union and is having accession talks. One of the crucial issues that occupy the minds of Europeans is a possible Turkish labor mass flow in several millions to the Western European cities. The findings of the book suggest that these fears could be groundless and based on invalid assumptions and thus the issue should be analyzed more carefully in the light of scientific data and evidence. In this context, this book is an important and very timely contribution that will help academics and policy makers in their future forecasts and evaluations. 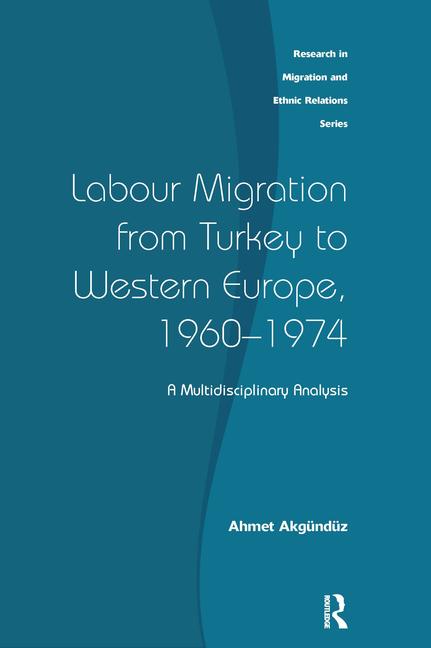