Studies on late Ottoman society continue to be inviting for historians in many aspects. This period is not only important for historical research into the Ottoman world but also necessary for a better understanding of modern Turkey.

Studies on late Ottoman society continue to be inviting for historians in many aspects. This period is not only important for historical research into the Ottoman world but also necessary for a better understanding of modern Turkey. This also can be extended to the Islamic world, including many Middle Eastern countries together with the Balkans, North Africa, and the Caucasus regions. Özdalga has made a valuable contribution with this comprehen-sive volume on the intellectual legacy of the period.

The book is a result of a conference titled “The Ottoman Intellectual Heritage,” which was held at the Swedish Research Institute in Istanbul on 15-17 March 2001. It included an in-troduction by Elisabeth Özdalga and ten essays written by eminent experts of different aspects of the subject. The book deals with a period where radical political, social, economic, and intellectual changes and transformations had been realized in the Ottoman society. It was also a time where European expansionism and modernization became influential throughout Ottoman lands. The attitude of Ottoman intellectuals against such developments was determined based on their political, social, and economic positions. Their religious or ethnic identities were also characterized the way they reacted towards such developments.

Starting with Ottoman modernization, in her introduction, Özdalga emphasizes that modernization, which started with the Tanzimat reforms gave way to the emergence of a new Ottoman intellectual. According to her, modern intellectuals became bearers of nationalist ideologies and they were independent of state, tribal relationships, and institutionalized religion. However, they also had their opponents, including Islamists and Ottomanists. Despite the ignorance of Turkish historians, modern Turkey was a result of this intellectual heritage and she emphasizes, “Late Ottoman society was a social order where a wide variety of ideas and streams of thought competed.” The aim of the book she states is “to illuminate along what trajectories Turkish intellectuals have followed the path to modern society.”

In his article, Erik-Jan Zürcher analyses the ideological roots of the new Turkish Republic. Six main principles of Kemalism were analyzed in the light of Ottoman origins in relation with the ideology of Young Turks. According to Zürcher, Kemalism was largely influenced by French positivism. The main intellectual figures of the Republican period, such as Ahmed Rıza, Ziya Gökalp and Abdullah Cevdet, were discussed and the impact of positivism on Turkish politics was explained in this chapter.

In the second chapter, Şükrü Hanioğlu discussed the influence of French and German mate-rialism on late Ottoman intellectuals. Hanioğlu tries to discover how late Ottomans intellectuals, such as Beşir Fuad, Abdullah Cevdet and Baha Tevfik, were influenced by materialism and analyzes the impact upon them of religion, philosophy, art and literature.

Christoph Neumann wrote a chapter on Ahmed Cevdet Pasha as an important figure of Tanzimat period. He was a statesman, grand vizier, historian as well as a legist and he represented the radical change of Ottoman intellectuals during the 19th century. Neumann concluded that Cevdet Pasha’s concept of state has had an important bearing on the political culture of modern Turkey.

Elizabeth Frierson analyzed the place of women in the Ottoman society in a period of change and transition. She used a magazine for women entitled Hanımlara Mahsus Gazete and pub-lished between 1895-1909, for a period of fourteen years. This chapter gives us information about the status of women, their intellectual situations, and the development of feminist ideas within the period.

İsmail Kara, as an important expert of the ulama in late Ottoman and the early Republican period, analyzed the position of the ulama against the new ideas and radical changes of the time. He used many publications together with rich illustrative examples and analyzed the general transformations, which took place in their world-view. He argued that while a part of the ulama continued under the influence of ‘medreses’ and remained unchanged an impor-tant part of them changed their basic political conceptions, including the caliphate and played a central role in the unfolding ideological and political strife.

Political use of Islamic identity was an important policy tool and had an important role in the reign of Abdülhamid II. Adeeb Khalid analyzed pan-Islamism ideas as a tool to keep Mus-lims under the authority of the Khalif against western colonialism. He distinguished three different forms of pan-Islamism: religious fanaticism, Ottoman state policy, and a new form of solidarity to keep Muslim elites together. Khalid pays particular attention to the last form as public pan-Islamism, which implied a broader, more complex structure built on the contributions of non-Ottoman Muslims of Russia, Central Asia, and India.

In the following chapter, Johann Strauss had a survey of publications authorized by the Ministry of Public Education based on the information in Ottoman statistical yearbooks (‘sal-name’). The survey included publications in Turkish, Arabic, Persian, and in the languages of non-Muslims such as Greeks, Armenians, Bulgarians together with European languages in-cluding French, German, Italian, and English. Strauss analyzed main issues in order to understand the character of cultural life in Ottoman society within the period. He argues that majority of the press was centered in Istanbul and run by non-Muslims. It had a multicultural characteristic and this diversity was the characteristics of the Ottoman intellectual heritage.

Akşin Somel in the chapter on Christian community schools dealt with the changes that took place in the Christian educational institutions during the Ottoman reform period. Christian schools together with the missionary schools were very important for the penetration of the European ideas of nationalist thought among non-Muslim subjects of the Ottoman State. Somel emphasized the role of the Christian community schools in weakening the multi-ethnic social fabric of the Ottoman State and politicizing ethnic and religious groups through spread of nationalism and other modern ideologies.

While Kara analyzed the ulama of the capital, Jakob Skovgaard-Peterson noticed another aspect of the ulama. He searched for the local muftis in Damascus and Beirut as regional religious leaders. The classical functions of local muftis discussed and the changes in their functions during the modernization period were pointed out.

In the last chapter of the book, Nathalie Clayer surveyed Ottoman civil servants of Albanian origin educated in the Mekteb-i Mülkiye. Clayer analyzed the story of these elite groups, which were Muslims but had a different ethnicity, during the Hamidian rule in relation to Albanian national independence and its aftermath. She also analyzed the Ottoman intellectual capital, which was transferred to the newly independent Balkan states and played an important role in the shaping of the Balkans’ political and intellectual life. Clayer also added a detailed appendix containing some biographical notes of the surveyed Albanians.

The book is a good example of the interest in the roots of Turkish intellectual life. It shows the rich sources of Ottoman heritage and draws attention to the ongoing development of alternative, original perspectives on Turkish and Ottoman intellectual history. It also reveals to us that there are many fields where further research can still be done to enhance the understanding of the Ottoman modernization period as well as the fundamentals of modern Turkey. 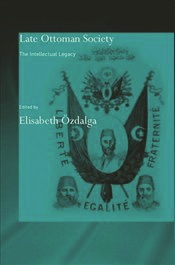