Lineages of Revolt Issues of Contemporary Capitalism in the Middle East

The Arab spring has wakened enormous interest in the political economy of the Middle East with analysis pouring from a wide spectrum of schools of thought; however, Hanieh disparages most of the analysis as being superficial and focusing on the surface appearance of poverty and inequality rather than engaging with the nature of capitalism as a systematic totality that penetrates every aspect of social life. Hanieh, therefore, feels compelled to throw his hat in the ring and provide us with his own analysis of the Arab spring through the lens of classic Marxist theory.

The Arab spring has wakened enormous interest in the political economy of the Middle East with analysis pouring from a wide spectrum of schools of thought; however, Hanieh disparages most of the analysis as being superficial and focusing on the surface appearance of poverty and inequality rather than engaging with the nature of capitalism as a systematic totality that penetrates every aspect of social life. Hanieh, therefore, feels compelled to throw his hat in the ring and provide us with his own analysis of the Arab spring through the lens of classic Marxist theory.
By utilizing the notion of class, Hanieh attempts to explore the aspects of the intertwined development of class and state in the Middle East, tracing how different classes originated, what their accumulation is based around, how this shifted over time and the ways in which the process of class formation links to the nature and changing attribute of the state. Throughout the book the concepts of: internationalization of class and state, imperialism, and neoliberalism are regularly deployed. According to the book, the internationalizing of class and state in the Middle East has rendered the national state apparatus indispensable in managing the domestic ‘capital order’ in a manner that contributes to the managing of the international ‘capitalist order.’ Imperialism is not a feature of colonial age Hanieh reminds us, but an ongoing and present process utilizing financial instruments, such as debt and foreign aid, taking place in interaction with indigenous social and political forces with the ultimate goal of reconstituting patterns of state and class in such a way that allows the penetration of neoliberal reforms. Neoliberalism, which is much more than simply ‘free market’ economic policies, in turn, represent a radical restructuring of class relations that act to facilitate and reinforce the region’s domination by external powers. By utilizing Marxist theory, class notion, and the concepts just described Hanieh implores his readers not to view the Arab spring as a struggle between authoritarian states and people’s yearning for liberty (political and economic), rather to view it as an uprising of people against ‘free market’ policies.

Hanieh’s analysis is seriously flawed; the source of this flawed analysis lies in his reliance on Eurocentric theories and concepts to explain the major transformations in the Middle East leading to the Arab spring without modifying these theories and concepts to fit the social and historic accumulation of the Arab people and the realities of the Middle East. In the Arab world, the political phenomenon finds its motives and drivers in the so-called ‘political subconscious,’ as described by Mohammed Abed al-Jabiri in his masterpiece “The Arab Political Reason.” The Arab political subconscious is formed by social relations that are tribal and sectarian both in nature and character. These tribal and sectarian relations occupy the center stage in the Arab political theater, whereas relations of production and economics play a partial and secondary role in society. How can classical Marxist theory and the notion of class explain the revolt in a country like Libya where tribal relations are central to the dynamics of society or a country like Yemen where tribal and sectarian realities dominate every aspect of life or a country like Jordan where the loyalty of east-Jordanian tribes to the royal family is the decisive factor in politics?

Hanieh’s analysis is also devoid of any mention of the impact that social imagination has on social and political behavior. Social imagination determines how people and nations perceive themselves, how they perceive their just place among the nations of earth, and how they perceive others. The Arab people have a collective social imagination full of glories, heroism, great conquests, and leadership. A common man on the Arab street who considers himself the rightful heir of the great empires of the Umayyad, Abbasid, and Ottoman and whose imagination has been shaped by the legends of Umar bin Khattab, Khalid bin Waleed, and Mehmet the Conqueror can only feel deep resentment towards ruling Arab regimes characterized by weakness and total submission to western countries.

Yet, the most serious flaw in Hanieh’s analysis is his total discount of ideology and its role in bringing about the Arab spring. Hanieh fails to mention the impact of ideology and the ideals put forward by political Islamic movements and the resonance of these ideals in the hearts and minds of Arab masses regardless of their class. The importance of ideology and religion were not absent from the mind of one of the most admired Marxist thinkers, Régis Debray, who described in his work “Critique of Political Reason” the mechanism through which ideology and religion mobilize historical subjects and shape political movements through the release of affective charges of belonging and closure tended by bodies of functionaries who maintain its continuity and transmit its doctrines. Hanieh’s analysis would have been much meaningful if he had taken into account the reformist critique of Marxist materialism and its eventual formation around a lucid set of political and ideological principles.

The analysis presented in the book suffers from a selective reading of events. The reader is left with the impression that Hanieh has a pre-determined opinion and that events are selected to promote that opinion rather than analyzing events within context and in their totality. The Muslim Brotherhood withdrawal from a certain demonstration during the Egyptian revolt or the leftists organization of certain activities during the Tunisian revolt are used to assert that leftist and labor movements provided the social force needed to fuel the Arab spring while the Muslim Brotherhood is painted as a collaborator with authoritarian regimes and even part of the counter-revolution. He puts forward this thesis in spite of the limited penetration of leftist and labor movements of the middle class and rural Arabian societies. Moreover, the Muslim brotherhood throughout the decades has paid the price of its political activism at the hands of the authoritarian regimes of the region.

All criticism aside, the book does contain certain valuable insights. One of the main insights comes when discussing ‘Gulf Capital’ and how the internationalization of the Gulf Cooperation Council (GCC) has transformed the political region, becoming internalized in the class structure of neighboring states. In the case of GCC, Hanieh skillfully draws upon extensive empirical evidence to make the case that any reversal of the patterns of neoliberal development in the Middle East requires challenging capitalism in the Gulf itself. Hanieh is also spot on when cautioning that the Palestinian issue should not be viewed as only a “humanitarian issue” that entails the violation of Palestinian rights and enormous suffering; rather it should be studied through Palestine’s connection to the wider region and its articulation with forms of imperialist power.

The reader who looks to this book to provide him with a deep understanding of the transformations leading to the Arab spring will be disappointed. Nevertheless, the reader can find consolation in the key insights the book provides. Finally, after more than three years since the start of the Arab spring we can only agree with Hanieh assessment that the causes for the Arab spring are still there waiting to be addressed. 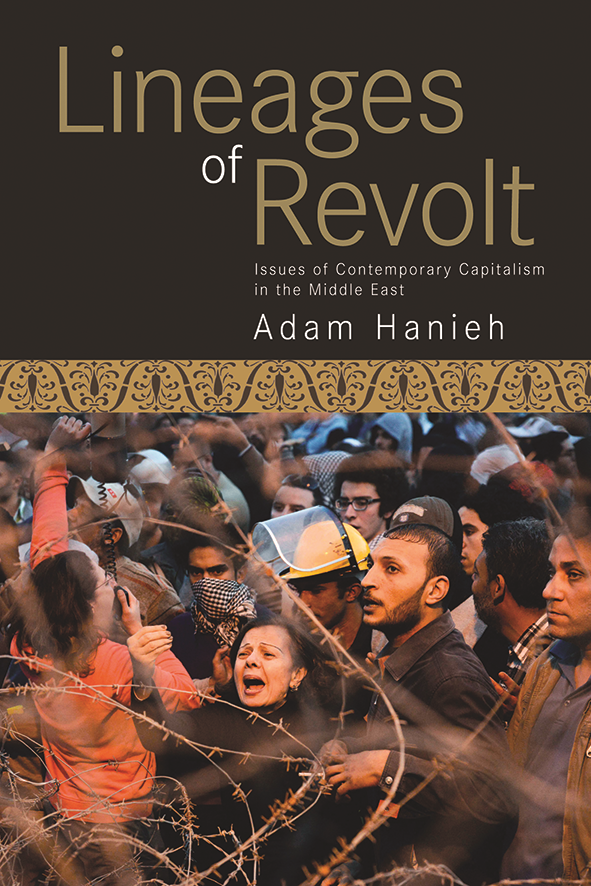