The author uses case studies from three different, but relevant, countries: the United Kingdom (UK), Turkey, and Pakistan. The purpose of the book is to analyze the conflict between the assumptions of modern legal systems and the plural legal realities.

Actually, these three countries is a good selection. The UK is a Western state that has many religious minority communities in which Muslims occupy the greatest ratio. Currently, 3.1% of the population of the UK is Muslim. The Muslim population of the UK mainly comes from the Commonwealth countries (namely India, Bangladesh, and Pakistan), the Middle East and North African countries. These Muslim immigrant groups are generally from the upper middle classes and intellectuals, and undergraduate and graduate students of home countries. As the author says, in Britain, the Muslim minority has not abandoned its adherence to customary and religious laws and has developed new forms of traditional values. Consequently, Muslim groups in the UK, while on the one hand seem to go along well with the official set of laws, on the other hand try to apply traditional Islamic customs and principles in their daily life.

Turkey is a unique case as it is a modern secular state with no official state religion, although Muslims, the main religious group, officially account for 98% of the population. As Huntington claims, it as a torn country between the East and the West. Although many of the its Muslim population will not give up certain religious principles and customs, enormous and powerful parts of the political elites (including civil bureaucracy, military bureaucracy, politicians and intellectuals) insist on the adoption of Western social and cultural values. However, the general population of Turkey opposes this policy, since these elites try to impose only social and cultural values, but not democratic ones, which the country actually needs.

Pakistan, on the other hand, is a modern Islamic state with a population 97% Muslim, where the government is an officially Islamic one and it has introduced several judicial reforms on different social issues such as Muslim family law. However, these reform attempts are not welcome by the general public because these judicial reforms are far away from meeting the real needs of a modern Muslim society. Therefore, society prefers to develop its own unofficial Muslim laws.

The author claims that Muslim people in these countries have developed their own legal systems that are different from the states’ official legal systems. Muslim people in these countries have applied interesting methods in order to solve their particular issues since they react against the frameworks of the official legal systems and do no want to move away from Muslim laws and their strong traditions. Sometimes even certain traditional values are more important than secular principles but even religious ones as well. In Turkey, for instance, the proverb “sometimes custom is more important than Quranic verses” (Bazen, adet ayetten önemlidir) is a clear example of this. Therefore, for example, some couples do not get divorced because of the reaction of their families and society, although religious and official laws permits it. Hence, they may even live separately, but they hide it from the society. Or, a common case in Turkey, since the judicial system legally prohibits polygamy, some people prefer imam nikahı (an unofficial, religious marriage ceremony) for the second wife and sometimes hide this marriage from their first wives and society.

The author implies that legal plurality is unavoidable because of the definition of the term of “law” which embraces three areas: the state, society, and religion. It is quite normal that these areas compete and interact with each other. Moreover, the author claims that Muslim laws cover a legal pluralism within itself with well-developed hermeneutical techniques.

The plurality of Muslim laws is firstly due to the main schools of laws (Madhabs), and along with these four great schools (Hanafee, Shaafi’ee, Hambelee, Maalikee), other small sects all have somewhat different views on the non-fundamental principles and practices of Islam. The second reason for plurality, according to the author, is the differences between the written and customary rules of Islam. These don’t always completely coincide with each other. The third reason for plurality is the differences between official Islam and folk Islam which means that the understanding of Islamic rules and principles is rather different between the population and official institutions. This fact can be clearly identified in Turkey where large numbers of Muslims do not believe or follow the official view of Islam. For example, in Turkey, the government once obliged people to donate the leather from the sacrificial animal during the Eid ul-Adha only to the Turkish Aeronautical Association. However, people refused and continued to donate the leather, an enormous source of financial income, to the traditional institutions and to Muslim NGOs, such as mosques, orphanages, and tareekat (religious sect) associations.

It is clear that the author has referred to an enormous list of literature written on this issues and he has presented the main points of discussion about the subject matters. Therefore, this book is a significant contribution for researchers and academics who study legal plurality and alternative applications of the official legal systems. 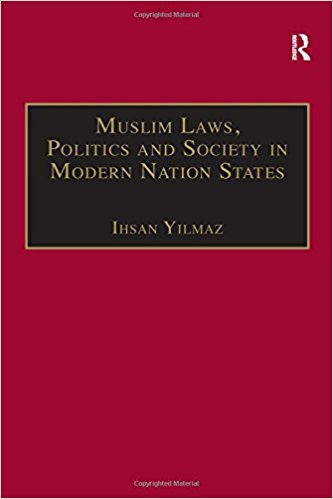