Muslims and Jews in France: History of a Conflict

The Israeli-Palestinian conflict has been, to a certain extent, shaping not just the relations between Israel and Muslim-majority countries but also the nature of the relationship between Jews and Muslims in the diaspora. In fact, many people tend to see the Israeli-Palestinian conflict as the only noteworthy factor that forms Jewish-Muslim relations in the diaspora –thanks to the Western media that have been relentlessly selling this narrative of conflict.

The Israeli-Palestinian conflict has been, to a certain extent, shaping not just the relations between Israel and Muslim-majority countries but also the nature of the relationship between Jews and Muslims in the diaspora. In fact, many people tend to see the Israeli-Palestinian conflict as the only noteworthy factor that forms Jewish-Muslim relations in the diaspora –thanks to the Western media that have been relentlessly selling this narrative of conflict. In Muslims and Jews in France: History of a Conflict, Maud S. Mandel, however, challenges this false conception and narrative through arguing that both the Israeli-Palestinian conflict and all the other conflicts in the Middle East have been shadowing local parameters and factors that might have been playing a substantial role in the formation and maintaining of Jewish-Muslim interactions and relations in the world. She focuses on the history of the Jewish-Muslim conflict in France, and vigorously demonstrates that there are local/national issues and dynamics, including colonial legacies, post-colonial minority policies, anti-racism alliances, and so forth, that shaped the Jewish-Muslim relations in France from the early 1940s until 2000s, in addition to the conflicts in Middle East and the Israeli-Palestinian issue per se. Muslims and Jews in France is a well-studied, nuanced and compelling book, which will soon become one of the seminal works in the studies of Jewish-Muslim relations in France.

Proceeding from the central claim of the book that in order to understand Jewish-Muslim relations in France one must consider both the Arab-Israel conflict and local-national contexts in post-colonial France, Mandel contends that an exclusive focus on the former is misleading. For instance, she argues, one of the local factors that shaped Jewish-Muslim relations in France is their asymmetrical integration patterns. According to Mandel, during the 1950s and 1960s Jews were more advantaged than Muslims in respect to accessing resources and means, including immediate assistance in arrival, housing, education, and so on, because of two main reasons: the presence of an established Jewish community and continuing legacy of colonial inequalities. Although both Jewish and Muslim people faced bitter discrimination in France, Jews received more of an institutional welcome than Muslims. Acquisition of French nationality was much easier for Jews than Muslims, which then influenced both communities’ integration measures. Mandel also notes that the pro-Jewish stance of the mayor of Marseille played an enormous role in favor of Jews, and created a considerable disturbance within the Muslim community. In summary, Mandel rightfully contends, asymmetrical integration patters of Jewish and Muslim communities was one of the local/national elements that played a significant role in their interactions.

Undoubtedly, the establishment of the Israeli state was tremendously significant with respect to the Jewish-Muslim relations in France, as Mandel unpacks the subject in chapter one. She claims that it was a considerable moment not only because of the transnational solidarity of Muslims with Palestinians, but also the French state’s pro-Israeli stance. Though, she crucially concludes, the “Muslim-Jewish conflict around the Palestine issue was rare” (p. 19); instead, the Israeli-Palestinian issue had become a way for both “Muslim and Jew activists to claim their political legitimacy in France” (p. 21). Mandel, in chapter two, argues that the role of the decolonization processes in North Africa and migration of Muslims and Jews towards France in the formation of Jewish-Muslim relations in France cannot be underestimated. During the decolonization process, the Jewish populations of Muslim nations, who migrated to Israel, were perceived as disloyal to their birth nations by Arab nationalists. Likewise, local Jews in North Africa felt insecure because of Arab nationalists, as they generally supported the French colonial rule, which eventually reinforced the polarization of the two communities. As a result, both Jewish and Muslim nationalist activist groups, Mandel argues, played a significant role in the emergence of new identities and in the construction of Jewish-Muslim relations in the diaspora.

Chapter three, on the other hand, is dedicated to understanding the post-colonial minority policies in France, in general, and adaptation processes of newcomers in Marseille, in particular, during the 1950s and 1960s. Although, it is argued, both communities faced unequal treatment, Muslims were more disadvantaged in terms of accessing a certain status in France, such as French citizenship. Chapter four shifts the focus towards the 1967 Arab-Israeli war and deals with its fall-out on Jewish-Muslim relations in France. A particular focus is placed on university students’ activities in campuses relating to foreign policy and the 1967 war. She examines how these activities influenced the daily interactions of Jews and Muslims. Illustratively, Mandel concludes that the 1967 war between Israel and Arab countries influenced the Muslim-Jewish daily relations in France less than the colonial past of the North Africa and France’s present attitudes towards minorities. The war, though, she adds, created more politically organized communities, hardened political discourses and narratives, and accordingly, the two communities competed to become a more important significant political actor than the other.

In chapter five, proceeding from the previous chapter, Mandel unpacks the 1968 student uprisings, and discusses how these uprisings impacted Jewish-Muslim relations in France. She argues that student uprisings not just fuelled the polarization between two communities, but also brought Jewish-Muslim relations into the center of national debates in France. Many commentators initially interpreted the riots as a natural expansion of the Israeli-Palestinian conflict; however, Mandel challenges this explanation and asserts that the causes of the riots “were more complex” (p. 100).
For Mandel, the tensions between Jews and Muslims in Belleville, Marseille, occurred due to “the combustible combination of leftist radicalism, massive strikes, postcolonial politics, and Middle Eastern tensions” (p. 104).
Finally, Mandel, throughout chapter six, deals with the rise and fall of Muslim-Jewish alliances during the 1980s. Anti-racism, she argues, was the main basis of the Muslim-Jewish alliance in the 1980s. Mandel believes that this alliance occurred because of two factors: (1) the new local-born generations, and (2) France’s recognition of cultural and linguistic diversity as a part of a multiculturalism experiment, which enabled the Jewish and Muslim populations of France to develop a new type of political rhetoric and led them to express communal politics (p. 125).

According to Mandel, a new political culture emerged during the 1980s, and there were two competing approaches, particularism and pluriculturalism, towards the participation of ethno-religious diversity in France. She interprets the emergence of these two approaches, and implementation of the latter as a part of a multiculturalism experiment, though interestingly she locates pluriculturalism opposite to multiculturalism and integration. Nevertheless, and this should be underlined, Mandel fails to clarify what she understands by “multiculturalism.” It remains ambiguous, since many scholars of multiculturalism have argued that multiculturalism was never experienced in France. The 1989 “foulard controversy” is one of the most salient examples that clearly indicates that France did not recognize (and still doesn’t recognize) cultural-religious differences, rather “French republicanism” has always aimed to assimilate its difference via implementing a citizenship policy based on jus soli.

Overall, Mandel successfully traces the local and national origins of the ambivalent relations of Jews and Muslims in France; and she vigorously demonstrates that the Israeli-Palestinian conflict is not the only factor that shapes their relations. Muslims and Jews in France is a significant contribution, I would recommend the book to those who are interested in contemporary French history and politics, in general, Muslim-Jewish relations, in particular. 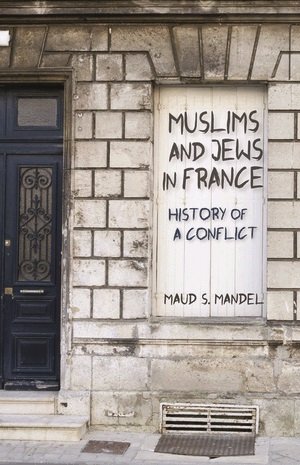