Non-State Challenges in a Re-Ordered World: The Jackals of Westphalia

The world felt the shock of various types of non-state actors (NSAs) such as the ETA, IRA and PKK, with their ethnic, separatist, leftist ideology, as they carried out terrorist attacks against nation-states in Europe and beyond in the 1970s and 1980s. However, recently, NSAs exerting regional and global influence and coming from under-developed regions like the Middle East and Central Africa have become widespread.

The world felt the shock of various types of non-state actors (NSAs) such as the ETA, IRA and PKK, with their ethnic, separatist, leftist ideology, as they carried out terrorist attacks against nation-states in Europe and beyond in the 1970s and 1980s. However, recently, NSAs exerting regional and global influence and coming from under-developed regions like the Middle East and Central Africa have become widespread. It is a fact that NSAs follow diverse ideologies. In some cases, their ideologies are antagonistic to each other, but they have common patterns: they act as an alternative forms of hegemonic power that ideologically, geographically, and economically agitate and expostulate against states, which have been the legal and legitimate forms of hegemonic power since the constitution of the Westphalian system.

NSAs are not new phenomena; they come in various types and have a history as old as that of national states. Moreover, the history of states has contains an abundance of events involving non-state insurgents since the dawn of the Westphalian system. NSAs exist in developed countries as well as undeveloped countries and they economically and ideologically resist and oppose states. Although the term NSA is mostly used to refer to illegal political organizations and/or terrorists organizations, some NSAs are legal organizations such as private companies that aspire to influence the domestic and foreign policies of states for their own interests. Non-State Challenges in a Re-Ordered World, edited by Stefano Ruzza, Anja P. Jakobi and Charles Geisler, presents NSAs’ impact on various regions and examines the ways in which, despite little attention by mainstream media, they nonetheless manage to undermine state legitimacy as well as popular political organizations.

The book has three parts and thirteen chapters including an Introduction and Conclusion. Each part has several articles that emphasize different political notions and geographies. The introduction, written by Stefano Ruzza and Charles Geisler, first speaks about the evolution of the concept of the Westphalian system, then focuses on the legitimate tools of states by utilizing the writings of Weber, Hobbes, Tilly etc. The authors indicate that states take their power from their legitimacy, which also condones for them the use of violence. On the other hand, the main goal of an NSA is to undermine state legitimacy and to transform the weaknesses of the states into seedbeds for establishing their own social order. In this context, by pointing out Western states’ early period filled with conflict, the authors’ main questions are, “What role do criminal and violent non-state actors play in transforming a Westphalian State-centered order?” and “Will the future of non-state violence invite a new medievalism?” (p. 3).

The four articles in the first part, “Challenging the State,” investigate the legitimacy of states from different perspectives. Acknowledging that the legitimacy of each state has different features, the authors highlight that the Westphalian state-centered system has changed both economically and judicially, and that its new version has several problems. The main outcome of this process is that NSAs have become an alternative form of power by creating regional sub-systems that are under their own control, and beginning to gain legitimacy and territorial power. As an example, in the first, third and fifth chapters of the first part, the authors claim that trade and state have intertwined and that states have lost control over the liquidity of money due to economic crises. In the last stage of this process, the states and Western democracy have turned into private companies; NSAs, by targeting the ties between the states and their economies (p. 25), and creating new family identity (pp. 28-29), may produce novice systems (p. 21). On the other hand, private companies could become states within states which pursue only their own interests, an eventuality which the authors term, “an organ as alternative for states.” Similarly, in the second chapter of this part, the author focuses on the ties between a state’s judicial system and the proportion of the state’s budget allocated for the judicial system. The author provides very interesting numbers and tables (pp. 38-40) showing that twenty countries allocate a low proportion of their budget for their judicial system because of “transaction costs” (p. 34). For instance, a very low proportion of citizens in Afghanistan and Mexico make use of state’s judicial mechanisms (pp. 35-36) because the system has failed to resolve social problems.

The articles in the second part, entitled “Defending the State,” primarily focus on security policies and the capacities of states. Believing that the existence of NSAs derives from states’ unsuccessful security policies, the authors compare states and NSAs in terms of their capacity for violence and deduce that NSAs may appear (or grow stronger) in regions where the democratic rule of law and legal economy do not work successfully, such as Latin America or Africa. For example, in the first chapter of the second part, pointing out that states have to fight with multiple groups, the author claims that the reason for the emergence of mafia groups is the absence of adequate opposition to them (pp. 89-92). By examining “conflict resolution” in international relations, the authors infer that even the states that can suppress NSAs (or compromise with them), have to consider the post-conflict period. Because, according to the author, what is essential for states is restoring order militarily, economically and socially. Otherwise, NSAs continue to control the region (pp. 96-99). As an auxiliary example, in second and third chapters of this part, the authors highlight that drug and human trafficking organizations are well equipped with weapons, and that they have various tactics and methods. That is why the methods used by the states’ security forces are sometimes inadequate (pp. 105-106 and 129).

The last part, “Changing the State,” has two main themes: Liberalism and War. The first two chapters of this part argue that liberalism and neo-liberalism contribute to the strengthening of NSAs in regions where the liberal economy has grown since 1989, as in Eastern Europe and El-Salvador, Honduras, and Guatemala, where neo-liberal economic policies are applied by governments. The authors claim that the transition to a liberal economy and neo-liberal implications in Eastern Europe have caused a reduction in the role of states and an increase in the “social disruptive processes of unemployment and migration” (p. 158). This conundrum has launched a new process that leads to a “crime economy” (p. 158). Finally, although mafia organizations and private security companies have different structures, both can become a state within a state.

Overall, the book stresses that NSAs exist not only in undeveloped regions like the Middle East or Central Africa but, as the authors state, developed countries also have to confront the nature of NSAs. In some cases and more interestingly, NSAs might use legal means to undermine the state, as in the case of private companies, and finally they can act as hegemonic prepotent powers that have their own rules and the ability to force state institutions to take decisions in favor of their own interests. In some cases, as the authors caution, they can be more powerful than states. The last stage of this system of evolution shows that states may not be as powerful as we expect, even in legal platforms. All in all, the book has very interesting information for scholars working on the evolution of modern state and of NSAs. It presents new approaches on the ‘new’ relations between non-state actors and modern state to understand the conflict between them. 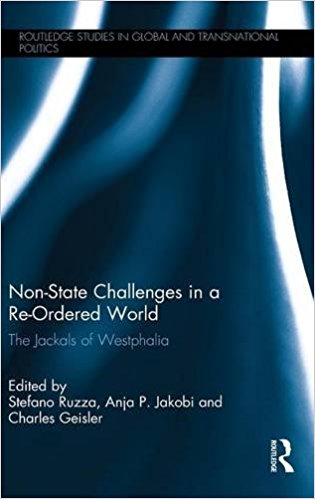 Architectures of Violence: The Command Structures of Modern Mass Atrocities, from Yugoslavia to Syria