By effectively defining the war on terror rhetoric, this heritage of Bush to Obama becomes the rhetorical lynchpin for the American foreign policy and everyday life in the post-9/11 era. Although various studies have analyzed U.S. foreign policy, studies on the rhetoric of the war on terror seem to remain limited. This book, that is a useful reference, serves scholars of U.S. foreign and security policy, Middle East studies, and terrorism.

By effectively defining the war on terror rhetoric, this heritage of Bush to Obama becomes the rhetorical lynchpin for the American foreign policy and everyday life in the post-9/11 era. Although various studies have analyzed U.S. foreign policy, studies on the rhetoric of the war on terror seem to remain limited. This book, that is a useful reference, serves scholars of U.S. foreign and security policy, Middle East studies, and terrorism. Besides the editors’ introduction and conclusion, this book consists of ten substantive chapters, each tackling what the authors identify as the implementation of counter-terrorism policies under the Obama Administration.

In chapter one, Trevor McCrisken claims that Obama’ foreign policy is compatible with the election rhetoric but expecting wholesale change in counter-terrorism policy is also unrealistic. The author illustrates differences in discourse and action in three accounts: First is the high expectation from the audiences and their misreading Obama’s discourse on the “change.” Second, Obama actually adopted a counterterrorism strategy that is inherited from Bush, called the ‘Late-Bush Era’ by the author. Finally, Obama’s emphasis on values and morality has been questioned with the increased drone attacks policy. In chapter two, the author evaluates the questions “Is the U.S. in decline?” and “Are we witnessing the rise of the rest?” Drawing on the theory of Paul Kennedy as to “imperial overstretch,” the author shows America’s shrinking resource allocation for national security policies with figures, but he also strongly emphasizes that the United States enjoys an indisputable diplomatic power. The U.S. still possesses a preponderance of power, which leaves a margin for making mistakes (p. 53). Another mistake in the Middle East would be more risky; hence, Obama adopted a more prudent approach, which was seen in the Libya intervention and in his approach of refusing to overthrow the Syrian Government. In chapter three, Nicholas Kitchen focuses in detail on the increasing U.S. federal deficits since the Bush Administration. Retrieving the ideas of Susan Strange, Kitchen argues that the U.S. deficit under Obama was an indication not of weakness, but of American power.

In chapter four, the author claims that in foreign policy, dropping the war on terror rhetoric from the official language, but further expanding the scope of Afghanistan and Pakistan operations; in the domestic sphere, using an inherited foreign policy team, applications and agencies give the impression that Obama pursues “tactical refocusing and repackaging”(p. 77). The author accounts for the continuity: Long-standing bipartisan foreign policy and public consensus on issues of national security; bureaucratic inertia; the desire to prolong presidential authority; and having a similar perspective to his predecessor, as claimed by McCrisken in chapter one. What is important in this chapter is that the author demonstrates quite well the ways in which the war on terror has been institutionalized in counterterrorism practices, and has become a powerful discourse; and how this rhetoric has been embedded into political, cultural and economic aspects of American society in many ways.

In chapter five, the author particularly underlines that the ‘war’ cannot be waged against abstract enemies; in line with this idea, Obama clarified whom the enemy was and focused on concrete and specific network, i.e. al-Qaeda. In chapter six, the author asks a significant question: “Why the war on terror discourse became dominant?” In answer to this question, the author evaluates the discursive power of the war on terror through the investigation of the affective power of this discourse, the role of emotion, desire and language that are intertwined with social constructions, which is explained through Lacanian theory.

The seventh chapter explores the use of soft power instruments and achieving integration of defense, development and diplomacy, so-called 3D Approach, that make Obama’s term different from previous administrations. The author examines Obama’s approach to the Arab Spring, particularly those in Tunisia and Egypt, and questions the ‘Obama Doctrine’ and its duration, we have not seen in other parts of the book. As Obama tried to climb out of the inherited challenges in Iraq, Afghanistan and Pakistan, he was faced with a more problematic one and allowed himself to become involved in a third over Libya (p. 133). Although the Libyan case brought a successful conclusion, the Syrian crisis justifies the claim of U.S. decline and its systemic constraint.

In chapter eight, Wali Aslam examines U.S. foreign policy in three accounts. First, the author states that unlike Bush, Obama looks at Afghanistan and Pakistan through the perspective of one theatre and one big challenge for U.S. policy (p. 141). In Afghanistan, Obama adopted a new approach that is to cope with the civil-military imbalance; to strengthen the democratic setup in Pakistan; and to establish a stable relationship between the U.S. and Pakistan. His second policy was conducting independent surveillance activities to disrupt terrorist networks in Afghanistan. The author shows how the U.S. failed to establish an intelligence network in Pakistan and encounter obstacles by detailing the Davis Incident. The third pillar is the controversial U.S. drone strikes that caused serious problems in terms of societal perspective and relations between the two countries. In chapter nine, Andrew Futter keeps his focus on the nuclear strategy of the U.S. The author believes that there was a shift in U.S. nuclear thinking away from primacy towards sufficiency. Obama sought to reverse Bush’ policies towards nuclear weapons and pioneered the Global Zero Initiative that is dedicated to the elimination of nuclear weapons.

The final chapter is centered on social scientific debates on the nature of time and; applying insight from these discussions to the understandings of Obama’s foreign policy. The author gives an overview of approaches to the notions of time by emphasizing the importance of social interactions and the consequences of these reproductions for society. One of the most obvious ways in which this happens is via the re/telling of stories about events (p. 179), i.e. narration, which has two integral aspects: The selection process and emplotment. The former provides more understanding on any story’s articulation, facilitating and justifying specific foreign policy responses such as Afghanistan and Iraq as seen in the pervasive narrative construction of 9/11 events. The latter gives us the directionality that is important for the construction and persistence of the war on terror rhetoric.

Overall, the book is highly relevant for providing a good theoretical framework on the war on terror. Though the effects and repercussions of the war on terror on both American civil society and U.S. domestic and foreign policy are taken up comprehensively, reading this book one comes across repetitions of the same subjects that arouse some questions about the totality of the book. Moreover, it does not give insights on how regional players and their role affect the U.S.-led war on terror strategy and how we can understand change and continuity in Barack Obama’s second presidential term. Furthermore, as the 2014 edition of this book, it lacks the discussion of Arab Spring and the response of the U.S. and its allies to support “change” in the Arab world. The overall discussion of the book revolves mostly around Obama’s rhetoric during his first presidential term. In conclusion, this is an exhaustive and theoretically rich work that will attract researchers interested in learning more about the role of the war on terror rhetoric in the U.S. foreign policy. 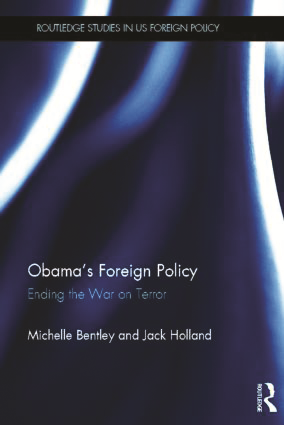