Peace in Turkey 2023, published in 2013, adds to the discussions on conflict transformation and human security by focusing on the case of the Kurdish conflict in Turkey from the perspective of “scenario building.” As Tim Jacoby and Alparslan Özerdem underline in the introduction of their book, politics in Turkey are marked by conflicting trends that point to an uncertain future, especially with regard to the Kurdish issue.

Peace in Turkey 2023, published in 2013, adds to the discussions on conflict transformation and human security by focusing on the case of the Kurdish conflict in Turkey from the perspective of “scenario building.” As Tim Jacoby and Alparslan Özerdem underline in the introduction of their book, politics in Turkey are marked by conflicting trends that point to an uncertain future, especially with regard to the Kurdish issue. The question of what Turkey will look like in the centenary of the establishment of the Turkish Republic is undoubtedly central, considering that the peace process has come to a halt. In a timely manner, the book adopts a unique approach to the Kurdish conflict based on “scenario-building,” which prompts us to think about future scenarios of the Kurdish issue in Turkey. The authors carefully underline that scenario building is “a method of stretching peoples’ perceptions and ideas about what the future may be like” (p. 12). In this respect, scenario building is not a tool for predicting the future, but rather an approach for imagining the future and thinking more deeply about the current situation.

One of the book’s most important contributions is that it provides brief and refined analyses of four cases of international conflict resolution processes. The second chapter is devoted to these cases, which are: Sri Lanka; Aceh, Indonesia; Northern Ireland, the United Kingdom; and Basque, Spain. In my opinion, the importance of providing a brief overview of these international cases is twofold: First, it provides a basis for a comparative analysis of these cases with the Kurdish rebellion in Turkey. Secondly, it is informative for the reader since these four cases are frequently cited in everyday discussions on the peace process in Turkey. After examining the international conflict resolution processes in the cases cited above, the third chapter is devoted to the Kurdish rebellion. The authors here provide the historical background of the conflict starting from the Ottoman era, and then continue on to the formation of parliamentary action since the early 1990s.

The gist of the book lies in the fourth and fifth chapters, which present a best case and a worst case scenario for the Turkey of 2023. The best case scenario offers a picture of Turkey in which sustainable peace has been institutionalized. In this scenario, the Prime Minister of Turkey is a Kurdish woman named Sevin Xewn and Turkey, as a “new republic” (p. 91), is depicted as having developed into a prosperous country socioeconomically. Furthermore, Turkey now boasts a participatory and liberal constitution that contains an ethnicity-neutral understanding of citizenship, and which formed the basis for successful disarmament, demobilization, and reintegration of the PKK militias. The worst case scenario, depicted in chapter five, is the opposite reflection. In this scenario Turkey is depicted as “the sick man of Europe” (p. 105) with its Prime Minister Vural Masumiyet in a press release trying to make acceptable to the Turkish public the economic package of the IMF. The worst case scenario is replete with small details that are in themselves very telling about the difficult conditions in which Turkey finds herself in 2023: the headline of ‘100,000th civilian victim’ in a newspaper (p. 111), the assassination of a newspaper editor (p. 111), a new dress code imposing the headscarf (p. 113), and a new decree on “The Voluntary Conversion of Alevis” (p. 113). The rise of the xenophobic right and of conservatism is the main characteristic of Turkey in this scenario.

While at a first glance the two scenarios may be regarded as simplistic and easy to imagine, they actually provide a fruitful exercise for a method of outlining possible paths towards peace. However, one main point of criticism is that these scenarios have not been integrated in a thoughtful manner with the international cases of conflict resolution analyzed in the second chapter. The reader would expect to see how the best and worst case scenarios projected on Turkey could be informed by developments in other cases of conflict resolution. Furthermore, the scenario-building chapters on Turkey stand also independent from the discussions of conflict transformation and human security that follow in chapter six. Here, an integrated analysis of these scenarios and the following discussion on the main concepts of the book is missing.

Chapter six explores possible ways of establishing sustainable peace in Turkey by 2023 (p. 122) by focusing on the concept of human security. Here, the authors analyze the Turkish case under the three basic principles of human security: freedom from fear, freedom from want, and freedom to live in dignity. Freedom from fear encompasses conflict resolution, de-securitization, and democratization. The resolution of the Kurdish conflict is first and foremost an issue of freedom from fear, which could be accomplished in part by moving to a de-securitized understanding of the Kurdish issue. Freedom from want encompasses just development, equality, and redistribution. From this viewpoint, freedom from want is closely associated with addressing the economic aspects of conflict and erasing inequalities. As the authors note, “peace needs to be translated into benefits for the day-to-day life of people” (p. 128). Freedom to live in dignity encompasses social justice and reconciliation. According to the authors, being able to live in dignity has two facets: first, the person’s social and cultural identities must be respected by law, and second, state structures and institutions should allow for the individual to achieve his/her goals and aspirations in life (p. 132). Here, the main issue is the move from “negative peace” –widely defined as the absence of conflict– to “positive peace,” where the root causes of conflict have been addressed.

Considering that, “writing scenarios has considerable potential not just to speculate about the future, but also to shape it” (p. 15), and that, “in order to achieve something, it is important first to imagine what this might look like” (p. 100), Peace in Turkey 2023 offers a valuable exercise into not only imagining the future but also into thinking about the current situation in Turkey while imagining the future in its best and worst manifestation. Real life developments in Turkey since the publication of this book in 2013, with their recurring cycles of conflict since 2015, unfortunately seem to push towards a kind of worst case scenario. At this point, the book is valuable in that it provides considerations on conflict transformation that deal with the root causes of the conflict and of human security that will open the door for freedom from want and fear, and freedom to live in dignity, all crucial for the establishment of positive peace in Turkey. Therefore, the book is highly recommended as useful not only for conflict resolution scholars but also for readers who are interested in exploring possible pathways to peace in Turkey. 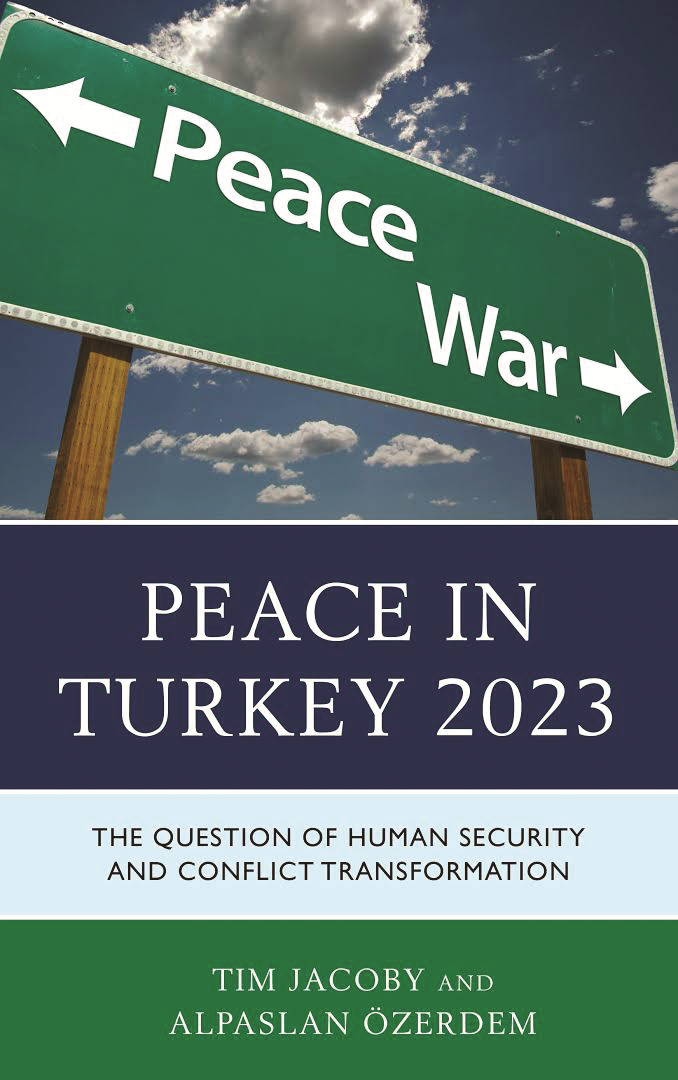