Polarized and Demobilized:Legacies of Authoritarianism in Palestine

The book reveals some basic and unique reasons for the Israel-Palestinian Conflict stemming from the Palestinian side, namely polarization and demobilization. Such exclusive findings must be read by people of concern. Thus, I highly recommend El Kurd’s precious book to readers.

The Israeli-Palestinian conflict is a century-old dispute that has culminated in a sovereign Israeli state and an occupied Palestinian state that is still struggling to gain its sovereignty. After the Israeli-Palestinian War right after the UN decision to partition Palestine into two states in 1948, Palestinians in the historic remainder of Palestine -the West Bank and Gaza- lived under the rule of Jordan and Egypt respectively until 1967. When Israel occupied the Sinai Peninsula (Egypt), Golan Heights (Syria), the Shebaa Farms (Lebanon), and more importantly the West Bank and Gaza after the Six-Day War, the people of Palestine forcibly came under the rule of Israeli military occupation. With the foundation of the Palestinian Authority (PA) after the Oslo Accords in 1994, Palestinians gained autonomy entirely or partially in territories called Areas A, B, and C, expecting this to be the first step toward being proclaimed a sovereign state in 1999. While that expectation did not come true due to Israel’s rejection, the Oslo Accords became a milestone for the attitudes of the Palestinians in terms of resistance to the occupation.

Dana El Kurd, a Palestinian scholar, analyzes and theorizes how the support of international actors damaged democracy, pacified civil society, and made the PA authoritarian in her book, titled Polarized and Demobilized: Legacies of Authoritarianism in Palestine. The book has five chapters. While the first chapter elucidates the study’s theoretical framework, the following three chapters encompass empirical analyses generated from qualitative and quantitative research, followed by a final chapter comparing the case of Palestine with those of Bahrain and Iraqi Kurdistan.

In the first chapter, El Kurd first presents her definitions of demobilization and international involvement and then focuses on the U.S. intervention in Palestinian politics. El Kurd argues that the U.S. uses aid as a carrot and stick against the PA and adds that America donated $8 billion between 1993 and the time of writing. Given the U.S. interference in the PA, she suggests several hypotheses. First, she asserts that international involvement leads to a divergence between elite and public preferences, as foreign powers (patrons) ally with authoritarian regimes at the expense of democracy. Complementary to the first hypothesis, she argues secondly that people have divergent preferences for democracy and accountability that correlate to their (non-)affiliation with the regime. Their degree of affiliation affects polarization and demobilization as well. As she explains in the following chapters, those Palestinians close to the PA, and the PA itself, practice exclusionary behaviors against critics of the government. As for the third and the fourth hypotheses, she argues that authoritarian strategies such as cooptation and repression generate polarization that causes stagnation in political mobilization. Although El Kurd bases her views on U.S. involvement to narrow the subject, her decision not to mention the interference of Arab countries such as Saudi Arabia, the UAE, and Egypt can be regarded as a deficiency of the book.

In Chapter 2 (and in subsequent chapters), El Kurd switches to empirical analysis by laying down the results of her survey conducted with 35 police officers and 1,270 ordinary people. Based on her survey, she contends that those people supporting the PA are less likely to embrace democracy. In addition to Fatah members, El Kurd reveals that secular Palestinians also do not prefer democracy because of the Hamas experience. On the other hand, the majority of elites (bureaucrats) interviewed say that U.S. involvement in the PA’s policies is crucial, while few of them see the PA as a hostage of the U.S. Some elites argue that the U.S. aims to reorient the PA from focusing on the threat of Israeli occupation to focusing on internal opposition through training programs that are allegedly activities of indoctrination. She adds that as the PA is dependent on the U.S. in many respects, the former has to be more authoritarian to appease the latter.

Chapter 3 is the section where El Kurd elucidates polarization. Seeing the PA as an authoritarian government, she argues that the PA follows steps of other authoritarian regimes to create polarization through inclusionary cooptation and exclusionary repression. For example, the surveyed PA elites say that Hamas is a traitor group, having similarities with ISIS. She contends that such views and exclusionary attitudes have led to a decline in cooperation and social cohesion. As a result, she says, polarized people will not unite and mobilize against Israel. Further, El Kurd accuses the PA of being a subcontractor of repression for Israel, facilitating the job of the Israelis.

In Chapter 4, the author tries to verify her theory about the PA, which, she argues, is the main source of polarization and demobilization. Reminding readers that the majority of Palestinian people are under PA rule, El Kurd argues that mobilization is less prevalent in Area A, which is under the full control of the PA, more in Area B, which is under mixed control, and the most in Area C, which is outside the control of the PA. In other words, the more an area is under the control of the PA, the less mobilization of the people is possible, as the Fatah-controlled authority impedes any upheavals and protests by force or deprivation. El Kurd argues that since the majority of people in the West Bank live on salaries given by the PA, they avoid losing their revenues and prefer not to clash with the PA or resist any unfair treatment. But where there is no PA impediment, Palestinians got what they wanted from the Israelis, meaning that the PA is the agent of principals (the U.S. and Israel) to stop Palestinians from seeking their rights. She gives a few cases of success stories achieved just because there was no PA pressure on people.

In the final chapter, she compares the case of Palestine with that of Bahrain and Iraqi Kurdistan and concludes that the U.S. involvement in sovereign Bahrain and autonomous Kurdistan made them more authoritarian, as it did to the PA. However, while foreign intervention culminates in more authoritarianism in the Middle East, the situation of Bahrain and Kurdistan can hardly be compared to the PA, as none of them are under existential threat. Also, besides Bahrain and Kurdistan, many other countries such as Egypt, Turkey, and Iraq fit El Kurd’s theory that international involvement creates authoritarianism in states where there are factions with clashing interests.

Overall, El Kurd develops the formula that international involvement, or let’s say U.S. involvement, has made the PA dependent on the patron (the U.S.). This dependency forces the PA to silence opposition groups like Hamas. When those Palestinian groups do not accept the terms forced by patrons onto the PA, they are repressed. Repression causes polarization, which eventually results in demobilization. Since various factions see each other as traitors, they do not cooperate and mobilize against Israel. El Kurd’s argument that the PA is the main obstacle to the unity and mobilization of the Palestinians is quite valuable and deserves more attention. On the other hand, as a reminder, the foundation of the PA led to its demobilization as well. In the 1990s, it was claimed Yasser Arafat would have contributed more to Palestine, had he not replaced his military uniform with a suit. The book reveals some basic and unique reasons for the Israel-Palestinian Conflict stemming from the Palestinian side, namely polarization and demobilization. Such exclusive findings must be read by people of concern. Thus, I highly recommend El Kurd’s precious book to readers. 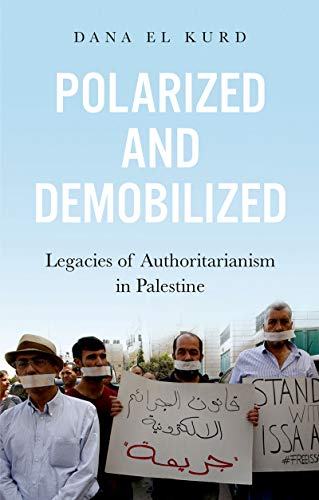