There is a growing literature on what political settlements are to be adopted in deeply divided (or post-conflict) societies and in protracted intra-state conflicts. These societies share the common characteristics of being divided by diverse ethnic lines based on opposing demands for security, power, status, and territory. The concept of consociationalism, which was introduced to political science by Arend Ljphart and first employed in the Netherlands in 1917, is a form of government that provides political stability in deeply divided societies through guaranteed group representation, power-sharing arrangements and functioning democratic institutions. The political settlements in divided societies and consociationalism together are increasingly becoming an autonomous subject of study. A burgeoning literature is emerging and political scientists are attempting to delineate and determine the main characteristics of this field.

There is a growing literature on what political settlements are to be adopted in deeply divided (or post-conflict) societies and in protracted intra-state conflicts. These societies share the common characteristics of being divided by diverse ethnic lines based on opposing demands for security, power, status, and territory. The concept of consociationalism, which was introduced to political science by Arend Ljphart and first employed in the Netherlands in 1917, is a form of government that provides political stability in deeply divided societies through guaranteed group representation, power-sharing arrangements and functioning democratic institutions. The political settlements in divided societies and consociationalism together are increasingly becoming an autonomous subject of study. A burgeoning literature is emerging and political scientists are attempting to delineate and determine the main characteristics of this field.

This book seeks to analyse the application of consociationalism to the Cyprus conflict and why elites in both the Greek and Turkish Cypriot societies have been unable or reluctant to overcome the division in Cyprus by adopting a power-sharing solution. Therefore, this book is a valuable source for filling a gap in the literature on the examination of the relationship between the consociational constitutional design and the Cyprus conflict. This book takes a rare up to date look at a subject, which is almost consumed by antagonistic literature. The Cyprus conflict has been dogged by an environment of mistrust created by both the Greek and Turkish sides, rendering an institutional power-sharing impossible thus far.

The concept of federalism has been the Turkish thesis since the collapse of the Republic of Cyprus in 1963 and consociationalism is a new, albeit underexplored, concept for Cyprus. Moreover, while the Turkish Cypriots are more prone to a powersharing solution among the divided Greek and Turkish societies, the Greek Cypriots are constantly denying that Cyprus is an island of divided societies. Consociational constitutional structures are designed to absorb and diffuse societal tensions within multi-ethnic societies. However, the author admitted in her book that this whole problem of attempting to bring the two ethnically, religiously, and linguistically distinct societies together under a consociational state can also be seen from a fairly different viewpoint, which is that the Greek and Turkish Cypriot communities operate in fact, independently from each other and each possess their own democratic political systems. This has been the case for more than 20 years!

Chapter 1 analyses the central tenets of and criticisms raised against consociational democratic theory, which is expected to foster a culture of consultation and cooperation between the elites of the divided Greek and Turkish Cypriot societies. The author also examines the perennial attempts to clarify the legal conflicts and limitations of the theory of consociationalism, as its major weakness is that it freezes ethnic divisions. It does so by building tightly-organised political structures around social institutions such as schools, universities, hospitals and newspapers, which do not reflect changes over time and therefore, lack flexibility in domestic affairs to prevent the potential for future violence.

Chapter 2 examines the history of the psychological role of ethno-nationalism in Cyprus from the perspective of the historical legacies left to both Greek and Turkish societies. These legacies have shaped the political elite and public attitudes, hindering the two communities respective resolve to find a political solution and therefore, have contributed to a power-sharing gridlock. Looking back at history, this chapter also draws on the insight of the historical conflict that has been institutionalised by the two societies separately from each other constitutionally. The institutionalisation of this historical conflict reflected in both the constitution of 1960 Republic of Cyprus and the 2004 Annan Plan.

Chapter 3 looks at the first attempt to implement a consociational democratic model in Cyprus through the establishment of the Republic of Cyprus in 1960. This part of the book examines the reasons why and how this approach failed because of the reluctance of Greek and Turkish political elites to enter into a power-sharing arrangement. This resulted in a traumatic consociational constitutional breakdown of the Republic. It has been argued that the main reason of the failure of consocationalism in the Republic of Cyprus in 1960 was based on the disillusionment of a considerable number of Greek Cypriots in the power-sharing arrangement with the numerically minority Turkish Cypriots. However, most Turkish Cypriots were felt vulnerable and became protective of their constitutional rights.

Chapter 4 analyses the 2004 consociational state proposed in the Annan Plan. The Plan would be the Constitutional basis for the United Cyprus Republic (UCR) and included concepts of proportionality, cross-community executive power-sharing, cultural autonomy, and veto rights. In this section of the book, the Annan Plan represents a represents a significant turning point for the Cypriotic elites, who are being forced by the public on the both sides of the island to co-operate and compromise. Public pressure on the Turkish Cypriot elite, supportive of the federal and consociational model, was effective. However, it was absent on the Greek Cypriot elites for a number of reasons. Turkish Cypriots voted in favour of (%65) the Annan Plan, while the Greek Cypriots voted against (%76) the same plan. Turkish Cypriots voted in favour of the plan since they were less concerned about becoming an anonymous minority in an unbalanced power-sharing decision-making mechanism of the UCR. But the Greek Cypriots found that accepting segmental division, proportionality and veto rights would render the UCR’s structure inflexible and dysfunctional.

Chapter 5 examines in detail elite relations on both sides. Both groups of elites seem to be trapped by their respective historical memories and used this rhetoric in the period when the 2004 Annan Plan was on the table. At the same time, the elites were looking for domestic incentives for compromise and co-operation to be able to reach a political settlement along consociational lines. This part of the book puts emphasis on the fact that public pressure on the Turkish Cypriot side was sufficient to create enough of an electoral incentive for co-operation and compromise, as the goal for Turkish Cypriots was to attain international political legitimacy and stabilise domestic institutions for the Turkish Cypriot state. Nevertheless, the writer remains convinced that the incentive to perpetuate the Cyprus conflict on the Greek Cypriot side is still greater than the incentive for reaching a consociational partnership state.

Chapter 6 addresses whether international actors have enough influence to encourage the Greek and Turkish Cypriot elites to overcome their communal barriers so they can reach a compromise and agree to adopt a consociational plan. The author concludes that in the case of Cyprus, the involvement of international actors such as the UN and the EU in the conflict has been counterproductive and their involvement has made the consociational plan a less feasible solution for constitutional engineers on the Turkish and Greek sides. The Achilles heel of the UN (UNSC Resolution 541) was that the Greek Cypriots are recognised as the sole representative of the Republic of Cyprus, while denying the Turkish Cypriots to have a formal status in their own state. This recognition limited the UN’s leverage over the Greek Cypriot elite. Moreover, the isolation of the Turkish Cypriots by the UN has denied them a legitimate voice as well as a power to counter balance the Greek Cypriots in the international fora. Likewise, the EU may have damaged any prospects for a resolution by shifting the balance of power in favour of the Greek Cypriots when the Republic of Cyprus unilaterally signed the EU accession treaty on 16 April 2003 without any involvement of the Turkish Cypriots. The decision of the EU to provide Greek Cypriots a legitimate status by giving them EU membership, as if they were the sole representative of the whole Cyprus, has undermined the EU’s leverage over the Greek Cypriot elites before the Annan plan was even put to a referendum. This is also a major reason for the deepening and continued intractability of the conflict.

Chapter 7 concentrates on the 2004 referendum as the mechanism for adoption of the proposed consociational state. This chapter provides two divergent case studies of the North and South of Cyprus. It demonstrates that the same issues triggered different responses by each community. Consequently, it explains the Annan Plan’s ultimate rejection. The author underlines that for Turkish Cypriots, the Annan Plan would provide a greater degree of transparency and democracy. However, the Greek Cypriots do not see the same positive gains from the Plan because for the past two generations the Greek Cypriot elites have told their community that such a solution would bring a return to the pre-1974 situation. In addition, the Greek Cypriot elites have made it clear to their constituencies that since they are now an EU member State, they are the dominant if not the sole representatives of the internationally recognised state of Cyprus.

The reviewer remains, however, sceptical about the longer-term consequences of what this book proposes. The author points out that a great number of changes needed for a consociational political settlement to be successfully adopted in Cyprus would only take place after both communities reach a broader societal and political level of maturity. Therefore, the main weakness of the book is that it does not attempt to offer an explanation on, nor explain how to create ‘new’ conditions which will facilitate the adoption of such a consociational constitutional model that will be the most likely structure of governance for a reunified Cyprus.

On the whole, it can be said that the book accurately reflects the specific aim of analysing political settlements between Cyprus’ two divided societies and the theory of consociationalism addressed in the corresponding chapters. This book is an attempt to find out why political elites in Cyprus are so unwilling to adopt a power-sharing solution, although it is technically not the only one form of consociationalism. The book presents new material for the wider debate regarding consociational constitutional design and peace plans in divided societies. 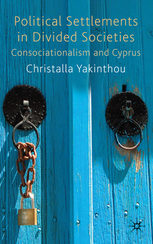 Heading Towards the Defining Moment in Cyprus: Public Opinion vs Realities on the Ground