Redeploying the State is a book about statehood, which can also be called state strength, capacity, or effectiveness. In order to address this topic, it takes as its subject a comparative study of Egypt and Mexico, particularly in the arenas of privatization and labor disputes.

Redeploying the State is a book about statehood, which can also be called state strength, capacity, or effectiveness. In order to address this topic, it takes as its subject a comparative study of Egypt and Mexico, particularly in the arenas of privatization and labor disputes. Hishaam Aidi asks why the Egyptian state was much less effective than the Mexican state in economic reforms, especially in regard to Mexico’s ability to overcome the labor movement’s opposition, despite the fact that Egypt was much more authoritarian and therefore had a more repressed labor movement than Mexico. While explaining this puzzle, Aidi implicitly refutes essentialism, which refers to certain “essences” of Islam, while explaining Muslim socio-political life. By comparing Muslim-majority Egypt with Catholicmajority Mexico, he rejects the so-called Muslim or Middle Eastern exceptionalism.

Aidi’s critique of the rentier state model is much more explicit. According to the rentier state perspective, a country that receives substantial external revenue does not extract extensive amounts of money from its own society through taxation. The lower ratio of taxation prevents a healthy state-society relationship and hinders democracy in such a country. For Aidi, this theory does not explain the higher level of authoritarianism and lower level of state effectiveness in Egypt in comparison to Mexico, because both states depend on external revenue and have low levels of taxation.

Instead of meta-theories, Aidi urges scholars to focus on each state’s own historical experiences, noting that these experiences create path dependencies in statelabor relations. In Egypt, since the Nasser period, the state has not allowed the emergence of independent political parties or labor unions. But the absence of these intermediary institutions has not empowered the state. On the contrary, the Egyptian state has remained unable to contain societal discontent, as was seen in the case of labor opposition to privatization. The state in Egypt has had to maintain patronage toward the workers and other social groups. The Egyptian state rulers have thus been concerned that without the constant allocation of public funding, jobs, and services to the citizens, the state would have failed to legitimize the political system and to prevent social unrest. In Mexico, in contrast, the existence of independent parties and labor unions have helped the state control the masses, including the workers, within the legitimate boundaries of the political system.

Some political scientists may criticize this insightful book for lacking a generalizable theoretical result, and providing only case-specific explanations. Although the book does not provide us with a generally applicable theory of causal relations, it includes several comparative insights with relevance beyond the two cases, insights about the political economies of authoritarian versus democratizing states, and their complex relations with social forces.

My main reservation is that Redeploying the State lacks a sufficient longitudinal analysis of the variations within the two cases. It portrays the two countries as if their state-society relations had remained unchanged for decades. That can be justified, however, by the book’s theoretical framework based on path-dependence and its emphasis on the historical continuity of two types of corporatism. Aidi argues that the state’s incorporation of labor movements into its bureaucracy during the state-building period made the Egyptian state less successful at political and economic reforms, whereas the attachment of labor movements to the ruling party in the founding of Mexico led to a more effective state. Redeploying the State is an important cross-continental analysis that is recommended to scholars of both the Middle East and Latin America. 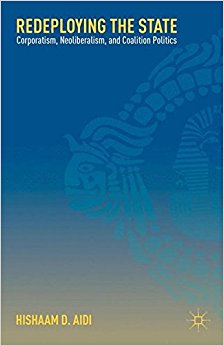 Sarkozy’s Policy in the Middle-East: A Break with the Past?