The authors respond to this puzzle from a rationalist-institutionalist perspective. In doing that, they focus on the strategic preferences of the political actors involved (namely political leaders, national parliaments, voters, Convention, delegates and governmental agents) as well as the procedures of Treaty revision that constrain their behaviour. They gather a wide data-set (including expert interviews) to delineate the preferences of these actors and their political strategies. The analysis of the data-set is conducted through sophisticated and innovative empirical methods including spatial modelling and game theory. The underlying argument of the book is that political reform is not necessarily achieved based on the lowest common denominator, but that one needs to take into account the interplay of interests through all stages of reform, including the European Convention, the referendums, and the inter-governmental bargaining that followed to understand how reform was finally achieved.

The analysis is conducted through seven complementary chapters where each focuses on a specific stage of the reform process. The first chapter by Tsebelis begins where the Treaty of Nice leaves off. It focuses on the differences between the Treaty of Nice and the Treaty of Lisbon in terms of facilitating decision making in the EU. Furthermore, it highlights that the constraining effects of the Nice provisions on collective decision, leaving left-wing EU leaders with little choice other than pushing for further institutional reform. In the second chapter, Proksch’s main forum of analysis is the European Convention, where he demonstrates how the Presidency of the Convention, and in particular, Giscard D’Estaing, the President of the Convention himself, positioned himself in the centre of the “conflict space,” which later helped him to galvanize he status quo position. After displaying the positions of the Convention Presidency and the Convention delegates, Tsebelis and Proksch in Chapter 3 explore the ways in which D’Estaing successfully removed the institutional constraints to turn the Convention into a success where compromise and agreement were finally achieved.

From this point onwards, the book turns to the national actors to evaluate their responses to the constitutional proposal. Chapter 4 by König and Finke draw out the positions of a diverse set of actors on a “two-dimensional reform space,” consisting of the scope of EU jurisdiction and institutional rules of the EU to be able to discern strategic behaviour in the following chapters. Accordingly, König and Finke in Chapter 5 take up the question of why eleven political leaders in the EU chose to go to referendum over an agreed text rather than opt for parliamentary ratification. As can be expected from a rationalist-institutionalist framework, the answer is found in the strategic interests of the political leaders, who took into consideration their gains from the revision of the Treaty of Nice and the potential support for treaty revision in their national parliaments. After the failed referendums in France and the Netherlands, however, reform friendly political elites chose a different path by delegating bargaining and compromise to their agents, who in some cases differed from the original positions of their national leaders. Konig and Finke in Chapter 6 importantly demonstrate how one should not take Andrew Moravcsik’s assumptions of “leaders efficiently bargaining over treaties” for granted in cases where they need to delegate powers to their delegates, who could side with the median voter in the member states rather than solely pursue the interests of the national leaders. Finally, in Chapter 7, König and Finke focus on the German strategy of offering modest concessions to those member states that were hesitant to ratify the Treaty instead of achieving minimal reform or restarting an EU-wide bargain, which contributed greatly to the successful outcome of the Treaty of Lisbon.

Overall, this is an excellent book for students of EU politics, particularly for those who want to understand EU Treaty change. The book would also be useful for students of political science in general concerning its up to date methods, which can also be rigorously applied in certain domestic settings. This does not mean that the book does not suffer from any weaknesses. For instance, while they point at the positive normative implications of having achieved institutional reform, in the sense that an EU that can make decisions more easily and effectively would help tackle its democratic deficit, they do not sufficiently problematize the ways in which “proceeding with ratification as if the rule for treaty change was a qualified majority, not unanimity” (p.194) hampers EU’s legitimacy further in the eyes of the electorate. In a similar vein, one can hardly dispute the fact that one of the main reasons that some political leaders opted for a referendum was the symbolic importance of the “Constitution” itself. It legitimizes the introduction, for example of a new EU Foreign Minister. Yet, these alternative explanations on “perceptions” and “symbolisms” would have required the authors to move slightly beyond rational-choice institutionalism, which the book is firmly anchored in. 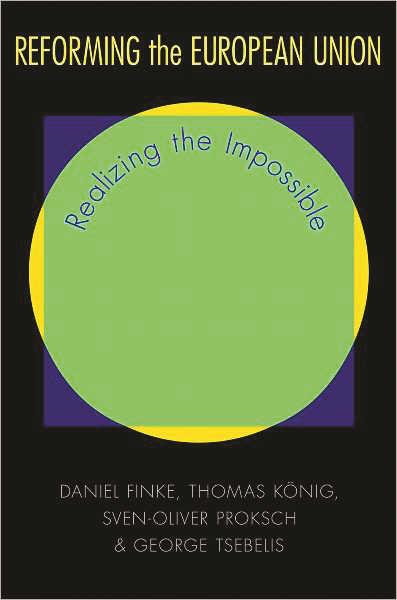