Regimes of Ethnicity and Nationhood in Germany, Russia, and Turkey

This is a path-breaking book that contributes to the literature on ethnicity and nationalism from various aspects. Conceptually, it develops a typology of three regimes of ethnicity—monoethnic, multiethnic, and antiethnic. The monoethnic regime, unlike the two other types, prioritizes one ethnic group in terms of citizenship and immigration.

This is a path-breaking book that contributes to the literature on ethnicity and nationalism from various aspects. Conceptually, it develops a typology of three regimes of ethnicity—monoethnic, multiethnic, and antiethnic. The monoethnic regime, unlike the two other types, prioritizes one ethnic group in terms of citizenship and immigration. The multiethnic regime differs from the two others by constitutionally recognizing multiple ethnic groups and even providing them territorial autonomies and some affirmative action policies. The antiethnic regime, in this regard, refuses to recognize a single or multiple ethnic identities as basis of state policy.

Empirically, the book examines three significant cases. Each of the cases is a typical example of one regime: Germany (monoethnic), Russia (multiethnic), and Turkey (antiethnic).[1] These cases are geographically, religiously, and politically very different but they are similar in terms of the dynamics of persistence and change in regimes of ethnicity. Although the three cases have preserved their main characteristics of regimes of ethnicity, they have also experienced substantial transformations in the last one and half decades. These changes have made their ethnicity regimes relatively more hybrid. Germany embraced a new citizenship law that allowed non-German ethnic groups to become citizens in 2000, Russia removed ethnic identifications in internal passports in 1997, and Turkey began broadcasting in non-Turkish languages in public TV in 2004.

According to Aktürk, such transformations are only possible if a counterelite develops a new discourse and gains hegemonic political power. In Germany, the new citizenship law became possible when the coalition government of the Social Democratic Party of Germany and the Green Party possessed hegemonic power with new multiculturalist/assimilationist, rather than mono-ethnic, discourses. In Turkey, the restrictions over the public usage of Kurdish and other languages were lifted due to the hegemonic power of the Justice and Development (AK) Party that had an Islamic multiculturalist discourse. In Russia, ethnic categories were removed from internal passports by the combination of Boris Yeltsin’s hegemonic power and his supporters’ liberal/assimilationist discourses. In each of the three cases, the counterelite received electoral and other kinds of support from ethnic minorities (i.e., Turkish immigrants in Germany, Jews in Russia, and Kurds in Turkey) while conducting reforms.

Aktürk explicitly criticizes the alternative arguments about the role of international factors in transforming ethnicity regimes in these three cases. He notes that neither international norms nor the European Union’s (EU) recommendations can explain these changes because reforms in the three cases do not mean a convergence to a more liberal regime. Moreover, he explains that timing of international impact and policy changes differ from each other.

In fact, Aktürk’s theoretical contribution is much broader than he elaborates. His argument implicitly takes on influential social scientific theories, such as modernization theory, essentialism, and rational choice. Aktürk’s argument stresses the importance of human agency and ideas (i.e., discourses). Thus, it challenges structuralist theories, including economy-oriented modernization theory and religiously-determined essentialism. It also means a challenge to rational choice theory that undermines the role of ideas in individual’s choices and behav-iors.

The readers of Insight Turkey may be specifically interested in the book’s analysis of the Turkish case. Its chapters on Turkey cover both historical background (based on archival data) and contemporary debates (through interviews). According to Aktürk, neither the EU membership process nor the PKK’s role is able to explain the recent “Kurdish opening” in Turkey. Instead, the author stresses that the reforms in Turkey’s policy toward ethnic identities can be best understood by analyzing the hegemonic power of the AK Party and its Islamic multiculturalist discourse, which can be traced back to Necmettin Erbakan’s challenge to Kemalist nationalism. Another counter-intuitive point in the book is its depiction of Turkey as antiethnic, rather than monoethnic, state. In other words, Aktürk emphasizes that the Turkish state, unlike its German counterpart, has not depended on a single ethnicity; instead, it has tried to create a common identity based on the assimilation of all ethnic groups.

I have very few and minor criticisms of this important and insightful book. The order of the three cases, for example, can be more consistent. The title orders them as Germany-Russia-Turkey, so does the introductory summary (pp. 28-41), whereas chapters are designed as Germany-Turkey-Russia, and the chronological order of reforms refers to Russia-Germany-Turkey (p. 261).

To sum up, Regimes of Ethnicity and Nationhood in Germany, Russia, and Turkey is a must read for students of ethnicity and nationalism. It is conceptually innovative, empirically rich, and theoretically inspiring. It is particularly timely for the case of Turkey where issues on ethnicity and nationhood are now at the center of public debates. 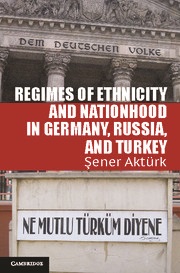