Religions of the Silk Road: Premodern Patterns of Globalization

To briefly mention some religions found along the Silk Road, we should first talk about Buddhism. Its beliefs spread from India to China by missionaries as early as the 2nd century BCE. During its journey along this trade route, various Buddhist schools evolved, artwork developed, and temples and sanctuaries were founded. Chinese Buddhist pilgrims began to travel to India, the birth place of Buddhism, a journey that only came to an end when Muslim armies occupied Central Asia in the 8th century.

Foltz stresses that religions in general are far from “monolithic” (p. 9), and thus some of the religions that were involved in the history of the Silk Road, and that are still known and practiced today (such as Judaism, Christianity, Islam, or Buddhism), cannot be imagined in history like we know them today as when facing foreign contexts, foreign cultures and other religious beliefs, all religious traditions adjust and become enriched, change their vocabulary, and incorporate foreign ideas. That Jesus has been referred to as the Mani Buddha (p. 84) is just one example of the enculturation of religious ideas that the author points to. In addition Foltz shows that today’s phenomenon of a “patchwork-religion”, often criticized by orthodox believers, is not a modern occurrence. The Mongol rulers especially were very open to any religious idea, as long as worshipping a certain god or prophet would help them reach their short-term objectives (p. 117). Maybe one could add to the title of the book the following sub-heading: “Premodern Patterns of Religious Pluralism”.

In his book, Foltz emphasizes how the Silk Road was a forum for the spreading of knowledge, ideas, culture and religion for over 3,000 years. He stresses that today’s foundations of globalization is based on the developments from many centuries ago from along the Silk Road, especially with its role in many religions’ birth, evolution and death. Some of these religions are still alive today, such as Buddhism, Judaism, Christianity and Islam, and some have disappeared. Directly or indirectly, the existence of a constant trade route helped to build relationships between religion and commerce as the Silk Road’s ideas reached even marginal areas in the West and the East.

In chapter four, “A Refuge to Heretics: Nestorians and Manichaeans on the Silk Road” (pp. 59- 84), Foltz provides valuable facts about the spread of Christianity through discussing two sects, Manichaeans and Nestorians, which are often neglected in historical accounts of Christendom. Many Christian theologians only refer to Manichaeans and Nestorians indirectly, when talking about St. Augustine of Hippo, who was attracted to Mani’s ideas before becoming an orthodox Christian, or the many church fathers who spoke about Nestorian ideas. The big influence those two groups had in Asia until the 15th century is well presented as well as their specific theology about the nature of Christ.

Foltz emphasizes three major reasons for the spread of Islam in Central Asia. The first reason is concerned with politics as “anyone contingent upon the government and have to accept its rules and customs rather than against it.” The second factor was economics as the region saw the “Muslim dominance of commercial activity.” After Islam spread on the Silk Road, it was easier to get in contact with other traders if you were a Muslim rather than a Buddhist. The third factor for the Islamization of the Silk Road was assimilation. The children who were born in mixed marriage family were raised as a Muslim according to Islamic law. In addition, Sufi shaykhs played an important role in the Islamization process as charismatic leaders, especially on the pastoral peoples. The spread of Islam continued with the Islamization of Turkic dynasties, such as the Qarakhanids, Ghaznavids and Seljuks, and Islam reached China through Muslim armies (when their soldiers settled in China and had their own families there) and were hired by the Tang emperor.

Foltz provides practical insights into how religion and trade have always been connected through many examples from sources; for example, when a Bulgar king was healed by a Muslim merchants and he then converted after that (p. 100). Another strength of Foltz’s work is his pointing out that the sociological and ideological process of self-definition and the formulation of identity markers in religions starts when they are “challenged by something they could conceivably be, but, for fear of losing their identity, must demonstrate they are not. (That is why belief systems in traditional societies often appear so frustratingly flexible and inclusive to modern, description-minded observers)” (p. 59). The Jewish identity formation process started under the Babylonian Exile but was concluded after Christianity started as a Jewish sect, and was defined in the Rabbinic tradition as a normative tool to define who and what is Jewish and who and what is not. It should be mentioned that the author has used a large variety of sources from different times, languages and cultures to prove his arguments on the religions of the Silk Road.

In conclusion, it can be said that religions, ideas, knowledge, as well as material goods were transported along the Silk Road for centuries. This transportation was done through language, the translation of holy texts, mixed marriages, war, the occupation of territories, and so on. As sovereignties changed hands, religion and trade inevitable changed hands too. However, Foltz’s conclusion about the financial market being today’s most wide-spread religion does not seem very convincing. There are various other things that are dominant phenomena in the world today which show liturgical aspects and order (for example, sports, music idols and so on). But all these phenomena do not completely substitute traditional religions in their purpose-creating, hope-providing and human-connecting powers.

I strongly recommend this book for those who are interested in the question of how religion and trade, religious inclusiveness and particularism have shaped inter-religious, inter-ethnic and international relations long before there was the modern idea of a globalized age. 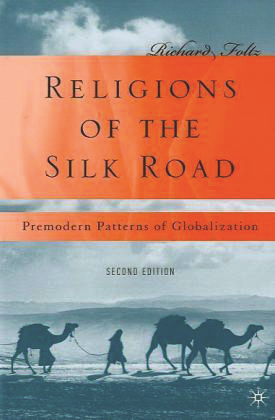 Archaeology of Religions, Cultures and Their Beliefs in Worldwide Context