William Dalrymple, famed British historian and writer, is widely considered as the leading modern scholar on South Asia and, especially, the British East India Company. His scholarly journey takes him north in his latest work, Return of a King: The Battle for Afghanistan, 1839-42, in which he narrates the events surrounding the first Anglo-Afghan War and details one of the largest strategic and diplomatic disasters in the East India Company’s history.

At its core, the novel is a sweeping epic that narrates the lives of Shah Shuja and Dost Mohammad Khan, intricately and inadvertently caught in the middle of the Great Game: the imperial rivalry between the Russian and British Empires as each vies for control of Central Asia. Dalrymple manages to deliver a humanizing account of the Afghan rulers, outlining their struggles and failures, the disintegration of the great Durrani Empire, and the subsequent emergence of the Sadozai-Barakzai rivalry (a poignant parallel to the larger Russo-Anglo rivalry) that stands as the central power struggle of the War. This period in history, in which the Afghans were no more than “mere pawns on the chessboard of western diplomacy, to be engaged or sacrificed at will,” is a brilliant echo of a modern Afghanistan, riddled with internal discord amid efforts to establish a stable unity against external intervention (p. 10). The book often reads more as a story than a historic narrative – colored by firsthand accounts from British and Russian intelligence officers and generals, and letters and journal entries penned by Afghan political figures and Western travelers – that paints vivid images of the beauty and humility of the Afghan people and countryside against the horrors of British occupation.

The book’s opening chapters examine the social and political climate of Afghanistan leading up to the 1839 War, from Shah Shuja Durrani’s fall and exile to the subsequent rise of Dost Mohammad Khan and the Barakzais. Alongside the emergence of Ranjit Singh’s Sikh Empire in Peshawar, Afghanistan quickly devolves into a land of tribal conflict and regional discord, ripe for interference from British and Russian forces, or the “Battle for Afghanistan.”

Much of the Anglo-Russo competition for Afghanistan emerges as a product of paranoia, through competing intelligence reports gathered by dashing Scotsman Alexander Burnes and Polish-turned-Russian-spy Ivan Viktorovitch Vitkevitch, two of the Great Game’s earliest players. Burnes and his brilliantly invaluable Indian secretary and counselor, Mohan Lal Kashmiri, advise London on the political and social climate of Central Asia and urge the British to support Dost Mohammad as Amir. Their counsel is ignored, however, against Major Claude Wade’s appeal to restore the Sadozais to the throne. The central chapters follow Britain’s efforts to ally with and reinstate the exiled Shah Shuja – headed by Sir William Macnaghten, Major-General William Elphinstone, and Lord Auckland – in the hopes of using him to unify and exert British influence over the region. The British army of 20,000 traverse across the Indus and through the Khyber Pass to Kabul, where they easily remove the Amir and proceed to occupy the region for the next two years. It becomes quickly apparent, however, that overconfidence, lack of regard for Afghan culture and society, and sheer tactical ignorance doom the British to a series of gross strategic errors. As such, it is the Shuja-led British revolt against Dost Mohammad that comprises the heart of the book, not for its political significance, but for its transformative and deeply profound effect on Afghan politics, society, and stability.

“‘I have seen this country, sacred to the harmony of hallowed solitude, desecrated by the rude intrusion of senseless stranger boors, vile in habits, infamous in vulgar tastes, callous leaders in the sanguinary march of heedless conquests, who crushed the feeble heart and hushed the merry voice of mirth, hilarity and joy… To subdue and crush the masses of a nation by military force, when all are unanimous in the determination to be free, is to attempt the imprisonment of a whole people: all such projects must be temporary and transient, and terminate in a catastrophe…’” (p. 194).

The Afghans – who for decades had witnessed power transfers and general political unrest – perceive their returned king as nothing more than a puppet ruler on behalf of British self-interest, and do not hesitate in declaring jihad against British presence in their country. The final chapter of the book details the blossoming distrust, resentment, and hate taking root in the heart of the Afghan people, and the gory massacre of the British garrisons at the hands of Afghan rebels led by Dost Mohammad’s ruthless son, Akbar Khan. While the British generals flounder in a remarkable inability to salvage their position, Dalrymple’s Shah Shuja perseveres as a capable leader of a failing regime, dedicated and determined to the very end.

“Shuja’s reign was brought down not by his own faults but by the catastrophic mishandling of the invasion and occupation of Afghanistan as managed by Auckland and Macnaghten, and as lost by General Elphinstone” (p. 378).

Dalrymple’s treatise gives the reader a glimpse into a historical event of great significance; one that, though almost 200 years past, sheds light on the political crises and social turmoil that have since plagued South and Central Asia. The author’s passion for the subject matter and dedication to his craft shine through in the accessibility of his prose and use of material researched from British, Russian, and Persian sources, as well as his own visits to the country in 2009 and 2010. The result is a richly comprehensive picture of a fragmented Afghanistan caught in the midst of Western imperialism. It is a sobering reminder of the importance of cultural identity, societal history, and political traditions in shaping the motivations and complexities of a region and its people. Above all, it is a tragic and humbling retelling of modern Afghanistan’s early history, a catalog of the wasted expenses and lives on an “unnecessary war of dubious legality,” and a testament to the perseverance of its flawed but ambitious rulers (p. 419). Shah Shuja’s vision for Afghanistan, as Dalrymple writes, was not “an isolated and mountainous backwater but instead as tied by alliances to a wider world,” and although it is “sadly not a vision that shows much sign, even today, of being realized,” it “has never completely died” (p. 378). 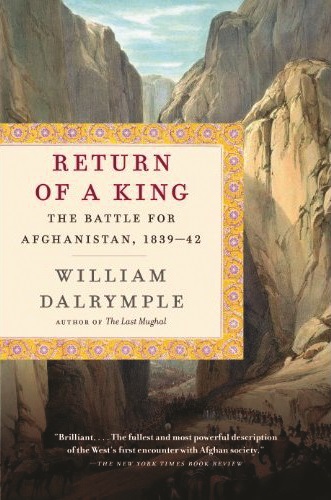