Russia and the Media is a well-rounded source of analysis. Referring to so many media sources through a wide time frame makes the study empirically strong and convincing. It is a useful resource for readers from different disciplines, such as international relations, political science, media studies, and journalism. Indeed, any reader curious about how the media can control people’s minds will find McLaughlin’s work interesting and thought-provoking.

Greg McLaughlin starts his book, which investigates media in Russia, with his childhood memories. Caught up by the fear of nuclear attack and the destructive consequences of the Cold War, he describes how he obsessively turned to research in a quest for understanding. Over time, his fear evolved into an academic interest and passion. With a degree in Media Studies in hand, McLaughlin now commits himself to study the collaboration of mass reporting and propaganda in the Cold War era, a task made even more relevant by the fact that less than a decade after the end of the Cold War, Western mass media found a new enemy in the face of Russian President Vladimir Putin.

Right from the beginning, McLaughlin explains how forging an enemy image is essential when playing with people’s minds. For instance, it helps the media to control and manipulate fear, mostly by exaggerating a threat. Crucially, it diminishes the human face of the danger, making it inhumane. Throughout Putin’s Presidency, his image at the hands of the Western mass media has undergone a transformation, even though it has never been positive. Throughout the book, Greg McLaughlin represents various images of Vladimir Putin.

In the third chapter the author explains that after his first election in 2000, Putin was presented as a mysterious spy, from whom no one knew what to expect. But many would remark upon his fondness for the monarchy, depicting him as ‘the young king’ (p. 31) who wants to destroy corrupt, evil individuals, but ends up a tyrant himself. McLaughlin notes that Putin’s image started to shift from 2004 onwards. The image of the President came under criticism, as did his elections in 2008, 2012, and 2018. In general, Putin’s democratic legitimacy was called into question from his second term onward.

The fourth chapter of the book describes three cases of murder and one attempted murder of opposition figures, all closely tied to the President. Two of them occurred in Moscow: opposition journalist Anna Politkovskaya and politician Boris Nemtsov were shot dead in 2006 and 2015, respectively. Both were known as harsh critics of the regime and of Putin directly; at the time of their murders, Politkovskaya was investigating killings that had occurred during the wars in Chechnya, and Nemtsov was opposing Russia’s involvement in the Ukraine war. The other cases occurred in the UK: Alexander Litvinenko, an ex-FSB (Federal Security Service of the Russian Federation) officer, was poisoned by the radioactive substance polonium-210 and died in 2006. Another ex-Russian agent, Sergei Skripal, was poisoned by the lethal nerve agent Novichok in Salisbury in 2018 but survived. Although none of these tragic events directly pointed to Putin himself, they were enough to stir Western enthusiasm to depict him as a killer. The message given by the mass media was clear: opposing Putin can be a ‘reason for death’ (p. 58). McLaughlin speculates that Putin may not directly order a kill, but in the end, people are killed in Putin’s name by individuals loyal to him. Nonetheless, it is Putin who shaped the regime where such actions are possible and in which he remains unpunished the media claims.

In the next chapter McLaughlin explores four military conflicts in which Russia was involved: domestic –the Second Chechen War– and international –the Russo-Georgian War, the Crimean Crisis, and the Syrian Civil War. In general, the Western mass media agrees that Putin uses war as a way to reinforce his power, specifically as a tool to promote his image as a strong leader who is always in control of the situation. For instance, McLaughlin argues, the Second Chechen War (1999) was a display to promote Putin’s popularity before his very first election. McLaughlin draws parallels between these events, in which Putin consistently acts and the West does nothing substantial. The bottom line is the image of the “strong leader of a weak East versus the weak leaders of a strong West” who are unable to go beyond their ‘soft power’ policy (p. 132).

The relation between President Putin with his American counterparts is another subject of McLaughlin’s research. During his reign, Putin has so far faced four different American Presidents. Despite some discrepancies, relations in between pairs, Putin-Clinton, Putin-Bush, and Putin-Obama followed a similar pattern of behavior: neutral, in general, with some ritualistic familiarity; and concerned, depending on the occasion. Thus, the Western mass media has leaned toward calling Putin a ‘cold fish’ (p. 131), considering his ability to remember his goals regardless of his counterpart. Putin-Trump relations, however, took a different path from the very beginning of Trump’s Presidency. Trump’s unabashed sympathy toward Putin caused or exacerbated a spate of high-profile flareups, such as Russia playing with the U.S. presidential elections. The Daily Mirror in 2017 called the pair the “dangerous duo” (p. 160), a term that reflects the image given to the relations of the Presidents by the Western mass media.

At the end of the book, McLaughlin aims to find an answer to the question: is the Cold War real or is it just mass media propaganda? The threat of nuclear attack and references to the Cold War appears in the media each time Russia is involved in any military conflict, such as the wars in Chechnya, Georgia, and the Ukrainian crisis. Some media specialists consider the Cold War merely psychological trauma that caused “paranoid tendencies of the West” (p. 183). In fact, the state of relations between Putin’s Russia and the West does resemble “the Great Power Diplomacy of the 19th century” (p. 182) and is more like a confused ‘multi-polar’ world, which is just as frightening as the Cold War (p. 183).

To sum up, creating an enemy image is a classical method of propaganda that is commonly used in politics as well as mass media, and journalism. The goal is to dehumanize an opponent by dramatizing and exaggerating a threat. Russia and the Media notably demonstrate only one side of the coin, i.e., how the Western mass media plays its role in establishing the negative image of Russia and its leader. But in such a game, actions are always reciprocal. Here it is worth quoting James Carroll from the Boston Globe: “When one side in a nuclear-armed contest is paranoid, the other side is, too. Madness is mutual, even the leaders seem sane” (p. 148). The book would thus have been strengthened by the inclusion of a glimpse of how the Russian media portrayed Western leaders during the same time period. Nonetheless, Russia and the Media is a well-rounded source of analysis. Referring to so many media sources through a wide time frame makes the study empirically strong and convincing. It is a useful resource for readers from different disciplines, such as international relations, political science, media studies, and journalism. Indeed, any reader curious about how the media can control people’s minds will find McLaughlin’s work interesting and thought-provoking. 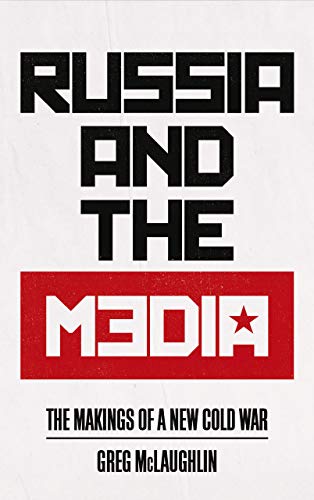