‘Eurasianism’ is a relatively new concept in Russian history, and not one that appeals beyond a fairly narrow circle. The argument goes back to the turn of the last century, when, looking for a Russian identity, one or two scholars, headed by a Prince Trubetskoy, discovered their Asiatic roots.

‘Eurasianism’ is a relatively new concept in Russian history, and not one that appeals beyond a fairly narrow circle. The argument goes back to the turn of the last century, when, looking for a Russian identity, one or two scholars, headed by a Prince Trubetskoy, discovered their Asiatic roots. Here lay temptation. Was Russia somehow a creation of Europe, of Germans especially? Peter the Great had famously set about the westernization of the place, and St Petersburg had been put up almost as a stage-set, “a combination of Wedgwood and cardboard”. By 1900, something of a nationalist reaction to such westernization set in, and the Eurasianists made much more of their Asiatic—for short, ‘Tatar’—side. They had had quite enough of hearing that the original Russians had been drunken buffoons whose civilization had to be planted upon them by Vikings or Poles or Baltic Germans. No, they said, we have a Tatar side, and we owe a great deal to the Asiatics. In this, they were quite right. Pushkin had said, of the Mongols who had crushed Russia for two and a half centuries, that they, unlike the Arabs who had taken so much of Spain at the same time, had not brought “Aristotle and algebra”. But in reality the Mongols brought a great deal, especially in styles of government. A third of the old Russian nobility had Tatar names (“Yusupov” from “Yusuf”, “Muraviev” from “Murad”, etc.) while Ivan the Terrible himself descended, through his mother, from Genghiz Khan, and through his grand-mother from the Byzantines. For a long time, under the Soviet Union, a sort of vehement and stupid nationalism was permitted to occlude the Tatar element in Russian history. Now, matters are rather different. In 2005 there were celebrations of it at Kazan; and there is an interesting aspect of Putin’s reign, that Tatars have been doing remarkably well.

There was a considerable scholar, Lev Gumilev, who devoted his life (despite periodic persecution) to the study of Russia’s Turkic roots (a substantial book, Eski Türkler, a translation, is kept in print by Selence Yayınları, 2007). This is of course a difficult subject, given that the sources are mainly external—Chinese, Arab, Byzantine, etc.—and there is always a serious question to be asked: so what? Here, the Eurasianists seem to have been divided. Some were downright anti-religious, seeing Christianity as namby-pamby stuff; others cultivated old Slavonic stuff, and there are surely cultural roots to Eurasianism that Miss Laruelle might have noted: the Stravinsky of Firebird, for instance, is stating a variant of Eurasianism when he celebrates the old myths of Slavdom, from an era when Finns, Tatars and old Slavs intermingled in the forests of Muscovy and Novgorod (it is certainly curious to see Turkish place-names quite far to the north). There are today a few Turks, notably Mehmet Perinçek, who argue for an alliance with Russia in the name of Eurasian solidarity, and of course if there is a country where the concept makes sense, it is Turkey. However, beyond a few adepts, it is not a particularly popular cause; even, the lack of institutions for the study of Russia in Turkey is striking, and surely not a good thing: when Turks go to Russia, they become very popular. Mayor Luzhkov, who has made a remarkable job of turning grim old Moscow into a lively and attractive city, says he much prefers dealing with Turks because they do not arrive with platoons of lawyers and they get on with the job. That ENKA built the head-quarters of Gazprom (and rebuilt the Russian parliament after 1993) says much. Or perhaps it is just that the Turks can understand the local styles of corruption: they know how to bribe with dignity.

It is tempting to suppose that Russia’s (and Balkan countries’) crest, the double-headed eagle, somehow reflects the division of the Roman Empire between western-looking Rome and eastern-looking Constantinople. Formally this is quite wrong: the bird has much longer origins (there is a Hittite original in the Museum of Anatolian Civilizations in Ankara, dated 2000 BC). But it is a very good symbol of ‘Eurasianism’, the notion that Russia looks both ways, that her identity is not European at all. ‘Eurasianism’ was (and to some extent still is) an intellectual current of some seriousness in Russia, and Marlene Laruelle, who has a distinguished academic pedigree in France and the USA, has done some hard work in sources that are not easy. The book, and particularly its references, are helpful if you need to consider Russian attitudes to the Caucasus and Central Asia. 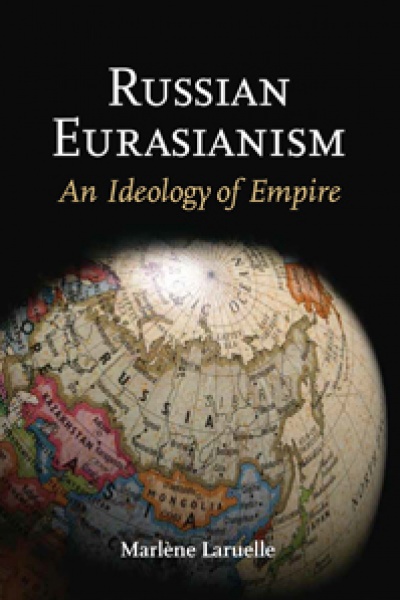