Sensible Politics is an excellent read for anyone trying to understand changing international relations in a post-pandemic scenario. In terms of border closing, social ordering has taken a new turn, especially since the discovery of more recent coronavirus strains.

Sensible Politics: Visualizing International Relations, by William A. Callahan, explores the newer dimensions of world-ordering theories. The author approaches these theories in a pragmatic way to engage with enmeshed social practices. The mutual exchanges of multisensory experiences give meaning and value to performatives such as garden-building or film-making. The book meanders through a nonlinear, nonverbal, and nonnormative mode, rather than a naïve West-to-East or Right-to-Left analysis. Callahan shies away from a mere Eurocentric analysis of ‘visual IR’ and tries to incorporate methods of the non-Western ‘Other.’ He introduces critical aspects of civility/martiality, barbarism/civilization, and Chinese practices and experiences as alternate ways to deliberate on comparative international politics from the vantage point of visuality. This productive tension between various dyads allows the reader to engage with visuality, affect, and artifacts instead of the more pronounced civility, ideology, and images that have occupied center-stage in the existing literature on the subject. The book’s chapters deconstruct how concealed power is rendered visible or invisible by certain ideologies promoted by the corporate sector and mainstream political understanding.

The book starts with a focus on the symbolic aspects of visual images in Chapter 1. The second chapter seeks a deeper understanding of the affective aspects of visuality by questioning the critique of ocular-centrism. Chapter 3 attempts to dilute the apparent dichotomy between visuality and visibility by focusing on their complementarity. The social construction of the visual is deconstructed in the fourth chapter to explore alternative and interpretive aspects of international politics, such as films, poetry, and art; and develops a theoretical framework based on the autoethnographic experience of producing a research film. Chapter 5 discusses securitization theory through the lens of visuality and its complicated relationship with world-ordering. Visual images have the characteristic of being ambiguous and can be circulated at length with great speed, giving them the power to influence foreign policy events. The next two chapters offer a confluence of the verbal and the visual, as cartography embeds within itself the social construction of cultural and political agendas.

Chapter 8 explores a completely unique concept of the Islamic veil and women’s participation in beauty pageants. The former leads to the hypervisibility of women, as the experience is disciplinary and creative at the same time. Callahan draws parallels between the visuality of concealing and revealing (in the form of veils and beauty pageants), and that of public diplomacy, which faces similar predicaments, as what is shown may not be necessarily true (p. 206). In Chapter 9, the author argues that despite globalization and the free movement of capital, the last few decades have seen reclamation of physical and cultural barriers. The next chapter discusses in detail the apparently apolitical space of gardens, which actually function to help shape and participate in international politics. According to the author, gardens have served as the sites of many diplomatic moments and national memorials that have creatively affected our understanding of international relations. Chapter 11 discusses the ‘culture of surveillance’ that cuts across concepts, experiences, and practices not just in the American and European context but also in China. Callahan moves beyond a binary distinction of East versus West and considers historical models of social ordering in pre-modern, modern, and contemporary society and the ways in which citizens and non-citizens were captured by the surveillant gaze in those times. The concluding chapter brings together different aspects of ‘sensible politics’ and their interactions to question populism by appreciating multisensory International Relations.

Sensible Politics highlights new sites for appreciating IR and contributes to war, diplomacy, and terrorism debates. It acts as an oblique entry into International Studies by incorporating professional practices of landscape architecture and film-making. The author wants his readers to not only think visually but also to feel these visual engagements for a more profound appreciation of politics (p. 316). He posits that our understanding of international relations is creatively shaped by producing new sites and sensibilities. Performatives around these sites, such as picture-taking, map-making, film-making, veil-wearing, and wall-building allow us to participate in international politics. For instance, maps are more than ‘mathematical representations of reality and have been historically used by nations to influence power and ideologies’ (p. 155).

Sensible Politics is an eager attempt to showcase alternative social orders and world orders “as affective communities of sense” (p. 44). Callahan analyzes Ai Weiwei’s work to highlight ethical aspects of international politics, especially in crisis situations. Weiwei’s documentary film, Human Flow (2017), is the prototype of visuals being used as a site of resistance. The film evoked transnational resistance to power (the Caliphate in this case) as the visuals successfully and creatively deconstruct the meaning of social and global. An increase in emotions led to enhanced securitization and ethical resistance, which might not have been the case if the analysis was limited to verbal understanding or the written word. Moreover, there is a collision of the personal, political, and international, as is evident from Callahan’s documentary, Great Walls: Journeys from Ideology to Experience (2019), in which he discusses a picture taken during President Nixon’s visit to the Great Wall of China. The photograph shows the contrasting emotions of the subjects of the photograph –the warmth of Mrs. Nixon and the stiffness of an army general– which has not been documented in the annals of the history and is only evident through that visual (p. 308).

Sensible Politics is an excellent read for anyone trying to understand changing international relations in a post-pandemic scenario. In terms of border closing, social ordering has taken a new turn, especially since the discovery of more recent coronavirus strains. Callahan is successful in adding to the already existing knowledge on the subject of visual studies. The inclusion of photos helps readers understand the nuanced impact of the written word. The book’s strength lies in pushing the binary distinctions of self-other, inside-outside, and staying away from essentializing identities. For those interested in analyzing IR through a different lens, the book offers a juxtaposition of affective emotions resulting from an engagement with the visual. 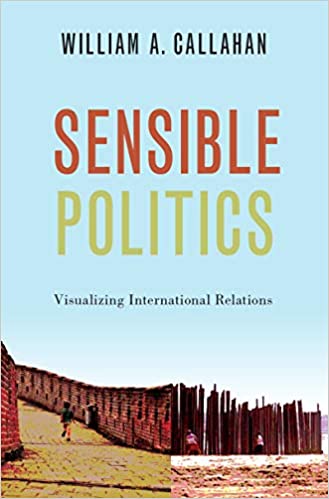