Holmes’ Social Unrest and American Military Bases is a comparative study of anti-American bases social movements that emerged in Turkey and Germany during the Cold War and continued after. The author explores the emergence and causes of these movements against U.S. military presence in two frontline NATO allies, how the U.S. responded to these movements, and which tactics these movements resorted to, in order to accomplish their objectives. In doing so she does a commendable job of blending international relations and social movements literature to better understand the domestic and international conditions under which the perception of an American military presence went from ‘legitimate protector’ to ‘giving harm’ to Turkish and German security and sovereignty, that it was initially supposed to protect.

Holmes’ Social Unrest and American Military Bases is a comparative study of anti-American bases social movements that emerged in Turkey and Germany during the Cold War and continued after. The author explores the emergence and causes of these movements against U.S. military presence in two frontline NATO allies, how the U.S. responded to these movements, and which tactics these movements resorted to, in order to accomplish their objectives. In doing so she does a commendable job of blending international relations and social movements literature to better understand the domestic and international conditions under which the perception of an American military presence went from ‘legitimate protector’ to ‘giving harm’ to Turkish and German security and sovereignty, that it was initially supposed to protect.

Holmes rightly pays significant attention to the 1960s as the period when a distinct, mostly left-oriented, social movement emerged in Turkey against the American military presence. Not only different leftist political organizations, many of them illegal (such as THKO, THKC, and THKP), protested, threatened, kidnapped, and hurt American military officers assigned to or visiting Turkey (for instance, for temporary port visits) but also Turkish workers at American military facilities in different parts of the country carried out organized strikes and protests. A critical contribution to this anti-base movement came from the leftist stream that developed within the armed forces as well (pp. 70-73). Although the 1971 and 1980 coup d’états significantly weakened the leftist influence, the anti-base protests flashed after the end of the Cold War as well, especially after the American decision to invade Iraq in 2003 and the U.S. requested Turkey’s consent to use İncirlik base to open a northern front in the war.

The anti-base social movement was more intense in Germany. There too, American military personnel lived under the dire threat posed by the Red Army Faction (RAF), which, according to Holmes “… were opposed not to the unintentional collateral harm caused by the U.S. presence in Germany, but rather the intentional, concrete harm caused by the U.S. war in Vietnam” (p. 105). The anti-base social movement employed other tactics as well, such as civil disobedience acts, including blocking military bases, and street protests. Although not stressed enough in the book in the case of Turkey, disruption of people’s daily lives and the humiliation felt by American officers’ daily activities also contributed to the social unrest. In Germany communities, near areas where American training continued 363 days a year, were badly affected from the noise and raised complaints over the years (pp. 125, 126).

This is a well-written book on an understudied subject, especially in Turkey. Its rich archival data is complemented by an impressive number of interviews conducted in Turkey, Germany, and United States. The author is absolutely correct that opposition to U.S. bases in Turkey was a homegrown event with only minimal relation to the Vietnam war (pp. 19, 67). It is also an astute observation that consolidated democracies are more likely be acquiescent in accepting U.S. military bases while democracies in transition ‘create’ less problems for American military presence (p. 20). When left-oriented groups protested American fleets visiting Turkish ports toward the end of the 1960s and the U.S. wanted Turkey, as a NATO member, to provide safe passage and shelter for the U.S. personnel, it also realized that Turkey faced a dilemma between obligations arising from NATO membership and its democratic system, which forced it to respect demonstrations. This reminds us of the perennial dilemma felt by American policy makers between ‘stability’ and ‘democracy’ both before and after the Cold War.

Holmes is correct to attribute the emergence of anti-base movement in Turkey in the 1960s to the U-2 spy plane incident, the Cuban missile crisis, and the Johnson letter as defining moments that turned both public opinion and some elite attitudes against the U.S. military presence (pp. 59-61). However, a more nuanced historical perspective could also see that the seeds of this social movement were sown in the 1950s. While mid-ranking officers’ attitudes toward increasing American presence in Turkey (military and economic assistance; physical presence) were ambivalent in the final analysis, several issues started to bother them and many of them later joined the conspiring junta that overthrew the Democrat Party (DP) and took over on May 27, 1960. Because the author did not pay attention to tens of Turkish military officers’ memoirs published and other secondary sources, she seems to have missed this point.

To elaborate, these disgruntled officers were very perturbed by the fact that American officers in Turkey, especially those in Joint US Military Mission for Aid to Turkey (JUSMAT) in Ankara, were involved in accidents costing Turkish peoples’ lives but avoided prosecution in Turkish courts. In addition they were selling their wives’ used clothing and other household materials to enthusiastic Turkish customers at exorbitant prices in Ankara and more crucially they were given free access to military barracks to ‘inspect’ Turkish military preparedness with Turkish generals (especially Chief of General Staff Rüştü Erdelhun) seeming very deferential in their dealings with even junior American officers stationed in Turkey. These wells of frustration and resentment based on daily encounters and practices is something Holmes refers to only in passing with examples from similar cases in South Korea, Japan, and Okinawa (p. 10) and only partially in Turkey (p. 192). It is true that Turkish officers were happy to get protection, new weapons and technology, which were “seen by many as the harbingers of modernity and Westernization” (p. 153). Nevertheless, resentment and humiliation accompanied envy and adulation felt toward the American presence.

Holmes correctly argued that the DP government kept the Military Facilities Agreement it signed with the U.S.secret because if it went public the agreement may have prompted memories and provoked old fears of capitulations granted to foreigners in the late Ottoman times (p. 54). However, bilateral agreements to be concluded between Turkey and the U.S. had already sounded like military capitulations for Cemal Madanoğlu, a member of the post-coup 38-member National Unity Committee.1 Another mid-ranking officer thought, with the total absorption of the American system “the Turkish Armed Forces was no longer a force relying on its own resources and sufficiency; it became an outpost force, whose source of resource supply was in the hands of a country at the opposite corner of the world.”2 These officers were not alone in raising these criticisms.3 The American military assistance from the excess materials was already criticized by General Cemal Gürsel, the PM and Chief of General Staff after the 1960 coup. Holmes could better pick up some of these and many more details from İncirlik Üssü: ABD’nin Üs Politikası ve Türkiye by Selin Bölme, perhaps the best contribution to American military base policy and İncirlik in Turkey, which the author lamentably left out. The author could also gain significant insights from retired general and later Senator Haydar Tunçkanat’s İkili Anlaşmaların İçyüzü published in 1970.

Holmes, seemingly unknowingly captured the involvement of Turkish armed forces in encouraging or (both actively and passively) supporting the anti-base stream in the streets. She refers, for instance, to a memo sent by U.S. Consulate in Istanbul to the Secretary of State in Washington, which indicated that the Consulate was aware of the leftist sympathies within the armed forces: “Turkish army officers allowed themselves be carried on the shoulders of demonstrators against allied fleet. No need to point out implication” (p. 70). In another instance with the involvement of the army, Admiral Orkunt criticized U.S. port visits as “needless provocation” (p. 73), which leads Holmes to write that “whether Admiral Orkunt was speaking for himself or on behalf of a larger contingency cannot be determined with certainty” (p. 73). A better perusal of Turkish military officers’ memoirs would allow Holmes to give a definitive answer to her own question: indeed, as she suspected, “opposition to the Sixth Fleet visits had spread from youth activists to the upper echelons of the Turkish Navy” (p. 73) as well as Air Force. The Air Force Command and the Navy were teeming with officers, who thought that the ‘noble’ objectives of the May 27 ‘revolution’ remained unfulfilled.4

In conclusion, despite lacking in some nuances, Holmes’ Social Unrest and American Military Bases offers an easy reading and systematic analysis of two important social movements that developed against American military presence in Turkey and Germany since the early years of the Cold War. Students of both social movements and international relations have a lot to learn from it. 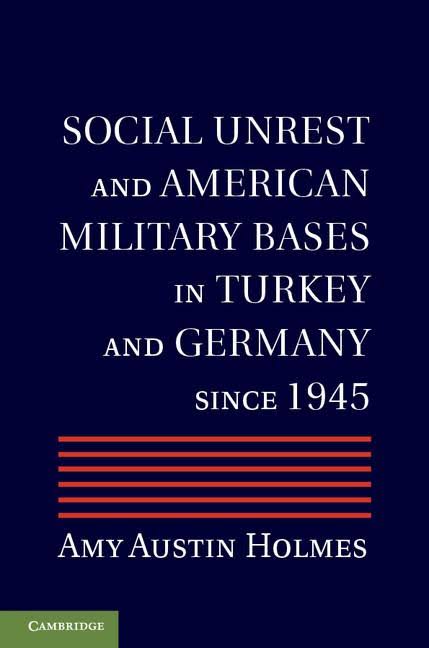