In Sovereignty RIP, Don Herzog exquisitely traces the journey of ‘sovereignty,’ taking the readers centuries back. Apart from its academic merit, the book will be of great interest to anyone interested in learning about the conception of sovereign power and its journey to the present.

In Sovereignty RIP, Don Herzog exquisitely traces the journey of ‘sovereignty,’ taking the readers centuries back. Herzog argues that sovereignty, which is revered as a guide to legal and political problems to maintain social order, may actually be causing more problems than it solves. The author does a magnificent job in illustrating when and how sovereignty emerged out of necessity as an ‘appealing’ concept and was eventually pushed to the background. He gives a vivid historical account of the events and struggles that forged sovereignty and then dismantled it. It is an excellent book for those interested in the study of constitutional doctrine and political theory.

In the first chapter, Herzog brings to light the precarious events that may have necessitated the need for an all-encompassing power that called for an ‘unlimited, undivided and unaccountable’ sovereign. The pervasiveness and often gory powers and actions of a sovereign were considered a necessary evil in the larger context of the need to curb the menace of religious wars in the sixteenth and seventeenth centuries. Great thinkers and philosophers, including Bodin and Hobbes, Grotius, and Pufendorf, among others, have in their writings and works propagated the idea that “social and political authority requires a sovereign authority” (p. 33) that is unlimited, undivided, and unaccountable. Herzog concedes that no state has actually embodied or functioned completely within the classic theory of sovereignty but maintains that the idea of absolute sovereignty was rather helpful in consolidating state power to preempt the vicious cycles of bloody conflicts.

In the following chapters, entitled “Limited,” “Divided” and “Accountable,” Herzog discusses the political and social milieu within which these three modifications of sovereignty were brought about through an explicit chronicling of the rise of constitutionalism, federalism, and the rule of law. In each of these chapters, Herzog elaborately and succinctly provides appropriate historical examples. The tussle between King Charles I and the British Parliament (p. 60) and the English Civil War sowed the seeds of one of the earliest debates on the idea of sovereignty as an unlimited authority and attempts to rein in the sovereign to some kind of accountability through constitutionalism (p. 63). Herzog uses conflicts such as the “disputes between colonies and mother countries” (p. 96) and the “putative jurisdictional division of labor this entailed” (p. 100) with colonists seeking “jurisdictional autonomy” (p. 105) to illustrate how the idea of sovereignty as a ‘divided’ concept came about. The stronger case for divided but successful sovereignty is American federalism (p. 162), but Herzog does not provide a clear argument on the division of sovereignty at the domestic level (American federalism) and America’s behavior when its so-called sovereignty is threatened externally.

As constitutionalism (limited) and division of power through federalism (divided) gained more acceptance, the last pillar of sovereignty as absolute, ‘unaccountable’ was reined straw of sovereignty as ‘unaccountable’ was reined in through the rule of law. Of course, making sovereignty limited, divided, and accountable does not necessarily mean that its earlier avatar has been wiped off the face of the earth. As recently as 2017, the United States of America claimed it was “being forced to defend its sovereignty” (p. 247) in response to the UN Security Council resolution calling for all nations not to place an embassy in Jerusalem in light of the Israel-Palestine conflict. In the last chapter, titled “Remnants,” the author concedes that sovereignty, despite outgrowing its usefulness and the essence under which it was forged, continues to persist and is even appealing in certain circumstances.

Despite its constitutional checks, division by federalism, and subjection to accountability through the rule of law, Herzog argues that the ‘modern’ understanding and usage of sovereignty often “furtively or unthinkingly” rely on the classical theory of sovereignty (p. xii). This raises two important questions that possibly undermine the fundamental thesis of the book, that “sovereignty is no longer a helpful guide to our legal and political problems.” Is it possible that sovereignty has over time transformed into a more furtive concept than the obvious naked display of brute force in the 17th and 18th centuries? Would it be then right to assume or argue that “sovereignty has outlived its usefulness or that it’s time, past time, to retire it” (p. 290) in the words of the author? Another and related question would be if, after all the efforts to tame or demolish sovereignty through constitutionalism, federalism, and rule of law, the idea of sovereignty continues to persist, as shown by the author with eloquent examples, then why attempt to demolish it at all?

Apart from these questions, the book deserves an appreciation for the abundant supply of historical facts at the most appropriate time. The data and how it is grounded in the context of three themes ‘limited’ ‘divided’ and ‘accountable’ is a treasure for those working on constitutional doctrine and political theory. The way in which the author neatly streamlines these extremely complicated and overlapping themes can serve as an effective and reliable reference for scholars in the field. Apart from its academic merit, the book will be of great interest to anyone interested in learning about the conception of sovereign power and its journey to the present. 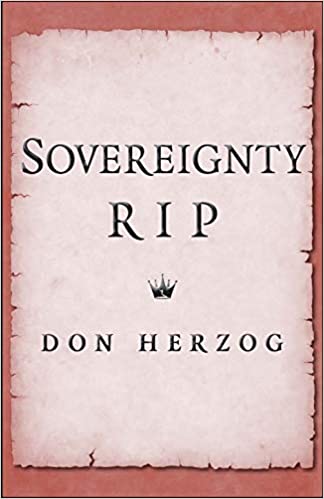