The present volume focuses, as its title indicates, on “the elusive congruence between territory and people,” in other words, on the respective roles of space (with its history) on the one hand, and religion, language and ethnicity, on the other, in the making of modern nation-states, or more accurately on the tense relationship between the two. As the editors eloquently put it, the nationalist movements’ “vision of an unadulterated purity … requires ethnic cleansing, expulsion, exchange of populations and forced conversions … Even the least primordial nationalisms are loath to take space as the primary defining dimension of their mobilization. So, they devalue, disregard and even suppress the particularity of territory; states and politics strive to make spaces into national (and shallow) places … Richness of the particular was a threat … Their histories, constructed as the imperative of the nation-state, actively forgot and suppressed big chunks of the lived experience of the populations. Accordingly, spaces that could not be readily assimilated were relegated into oblivion” (pp. 1-2).
Indeed, tensions between territorially-based and primordial attachments were particularly acute in the successor states to multi-religious, multi-ethnic empires like the Ottoman state. The Ottoman millet system and the nineteenth century’s dominant ideology of Ottomanism attempted to provide a territorially-based alternative to the rising nationalist movements in the Balkans. The millet system consisted of granting the recognized non-Muslim communities a substantial degree of autonomy in their religious and communal affairs. The idea of Ottomanism, in turn, meant a concept of citizenship based on a common territory and loyalty to a common state, regardless of religious, ethnic, and sectarian differences. Equality before law and equal access to public service posts were recognized by the edicts of the Tanzimat (Reform) period, particularly by the Reform (Islahat) edict of 1856. Yonca Köksal in her chapter in the volume (“Urban Space and Nationalism: Changing Local Networks in the Nineteenth-Century Ottoman Empire”) argues convincingly, however, that changes in the urban landscape and the expansion of the urban fabric, especially in the commercial port cities, also an outcome of the Tanzimat reforms, “ironically contributed to the rise of state-seeking nationalism,” by breaking rigid localism and facilitating “communication between different social factions of the same linguistic-religious group … By limiting the power of religious clergy, the reforms destroyed an important channel of influence through which Ottoman rule maintained its hold. The new millets were organized along linguistic and ethnic lines, emphasizing nationality and secularism” (pp. 39-40). In a sense, the idea of Ottomanism can be considered an early precursor of the modern idea of constitutional citizenship and constitutional patriotism. In hindsight, however, it is clear that it had very little chance to succeed in the face of rising state-seeking ethnic nationalisms. Similarly, the millet system can be seen as a pre-modern example of the modern notion of “corporate” or “non-territorial” federalism.

The efforts of the nationalist leaders of the new states to homogenize or purify the population along ethnic/linguistic lines brought about ethnic cleansings, expulsions, exchange of populations, and successful or unsuccessful attempts at assimilation. Paraskevas Konortas’ chapter on “Nationalisms vs. Millets: Building Collective Identities in Ottoman Thrace,” analyzes this problem in the particularly multi-ethnic, multi-religious area of Ottoman Thrace. The author provides an excellent account of the competing Greek, Bulgarian and Turkish nationalisms, as well as of the conflict between the Patriarchate and the new Bulgarian Exarchate. Thus, at the end of the Balkan Wars four bilateral conventions on the exchange of populations were signed between the three Balkan neighbors: the Bulgarian-Ottoman convention of 1913, the Greco-Bulgarian convention of 1919, the 1914 Greco-Ottoman convention of 1914 (planned but not executed), and finally the Greco-Turkish convention signed in Lausanne 1923 (p. 180). The present author is among those who consider the last Greek-Turkish exchange of populations to have been an extremely regrettable event, causing not only countless personal tragedies, as so touchingly described by the famous Turkish novelist Yaşar Kemal in his quatrelogy entitled Bir Ada Hikâyesi (The Story of an Island), but also a considerable economic, social, and cultural impoverishment of Asia Minor.
Three more chapters of the volume also focus on three formerly multi-ethnic and multi-religious regions of the Ottoman Empire: İzmir by Georgios Agelopoulos, Antakya by Reşat Kasaba, and İstanbul by Ayşe Öncü. All three areas now belong to the Republic of Turkey, religiously but not necessarily ethnically and linguistically homogenized. Thus, İstanbul has a sizeable migrant Kurdish population, and Antakya includes a large Arabic-speaking Alawite (Nusayri) population. Two more chapters, by Yael Navaro-Yashin and Caesar V. Mavratsas, are on Cyprus. In the words of the editors, “what has been going on in the island over the last half century replicates, in smaller geographical scale and with considerable delay,” some of the themes highlighted in this volume (p.5). Indeed, all these case studies provide valuable insights into the complex and often tense interrelationship between territorially-based and primordial (principally ethnic) loyalties.
The tragic deportation of the Armenians in 1915 and the exchange of populations between Greece and Turkey made the territory of the new Turkish Republic much more homogeneous, at least as far as the Christian population of the empire was concerned. Thus, the non-Muslim population, which had constituted roughly 20 percent of the Ottoman population before World War I, dwindled to 2.78 percent (378.664) in the 1927 census, and continued to decline up to present day. Their exodus continued during the republican period, as a result of the discriminatory policies of the republic, particularly the scandalous poll tax (varlık vergisi) of 1942/1943, the tragic pogrom of September 6-7, 1955, and the unilateral abrogation by Turkey in 1964 of the 1930 Turkish-Greek Treaty, which forced Greek citizens living in Turkey to emigrate. Today, the non-Muslim population of Turkey constitutes only about 0.5 percent of the total population.

Nur Yalman’s important contribution to the volume, entitled “Imagining the Nation: ‘L’imaginaire’ and Public Space in Turkey,” focuses essentially on these issues, namely the tension between the republican founders’ ideal of creating a homogeneous national and secular society, and the Ottoman heritage with its diversity of cultures combined with an attachment to Islamic values. He thus argues that “behind the vociferous bickering lies a profound disagreement over how to handle the legacy of the Ottomans and the change over into a nation-state” (p. 114). He ends with a passionate invitation “to get away from the exclusionary tendencies of the nation-state and move towards the inclusiveness of common citizenship … The ideal of a homogenous nation-state (ein Volk, ein Land, ein Führer) has let us down with dreadful consequences. We need to formulate those political theories that are essential for a more nuanced conception of identity and citizenship” (p. 124).

Therefore, ethnic nationalism is associated with efforts at assimilation, exclusion, and forceful homogenization, which often result in grave human tragedies and/or the alienation of important segments of the population. Another, and in a sense opposite, danger is that it may lead to irredentist movements and consequently to severe conflicts among neighboring states. In this volume, Anastasia Stouraiti and Alexander Kazamias present an excellent account of the Greek Megali Idea. The authors argue that it encompassed “four main intellectual elements: an irredentist nationalist ideology, a Western civilizing mission, an ethno-religious concept of nationhood and an imperialist project of reviving the old Byzantine Empire, all unified in the same utopian vision of creating the state of Greater Greece,” in other words “an amalgam of several conflicting aspirations that could be reconciled only at the level of utopic imagination” (pp. 13, 32).

The Turkish equivalent of Megali Idea was pan-Turanism, namely the idea of uniting all Turkic-speaking peoples under the same state. Pan-Turanism was one of the three political programs, the others being Ottomanism and Islamism, heatedly debated during the second Constitutionalist period (1908-1918). Among its supporters were Ziya Gökalp, the leading nationalist theorist of the Union and Progress (CUP) regime and Enver Paşa, the most powerful member of the ruling triumvirate. Indeed, Enver Paşa lost his life in 1926 in Central Asia, leading an insurrection against the Soviet regime. The founders of the Republic realistically and wisely refrained themselves from such irredentist claims. However, pan-Turanist ideas survived even during the single-party years among a small but influential group of intellectuals. With the collapse of the Soviet Union and the independence of the Turkic-speaking Central Asian states, many Turks seemed to have entertained the hope of establishing some kind of commonwealth of Turkic-speaking states. It became clear in a few years, however, that in international relations realpolitik was a much more important factor than ethnic and linguistic affinities.

In conclusion, the volume is a valuable contribution, the product of a commendable collaboration among a team of Greek and Turkish scholars. It provides important insights into the fascinating but also problematic processes of nation-building in the two countries. As such, it surely contributes to the comparative studies on nationalism and nation-building. Another, no less important, virtue is that it helps to correct many overtly nationalistic and stereotyped accounts of a number of historiographers in both countries, and thus promotes a better understanding between the two neighbors. 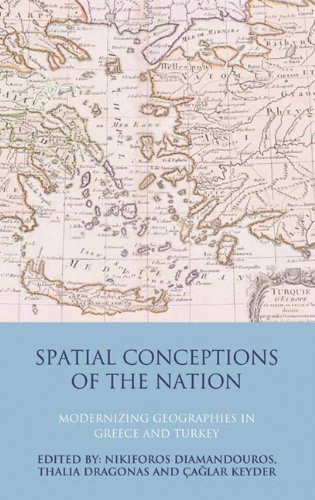